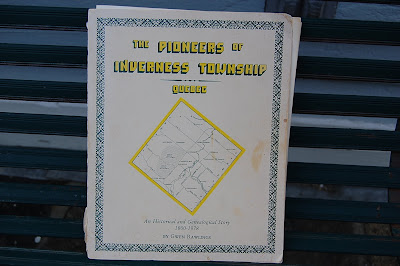 The Pioneers of Inverness Township, Quebec
An Historical and Genealogical Story
1800-1978
by Gwen Rawlings
nonfiction, 1979
finished, 7/10/08

This book was the perfect start to The Second Canadian Book Challenge, Eh? for it is about my personal connection to Canada. Of all the ways I have thought of myself, pioneer was never one of them. Yet, I come from pioneer stock - though not in the way I've always considered pioneers - people from the eastern United States heading west. My pioneers are those from Northern Ireland who helped settle part of Quebec. The author writes:

Several factors account for the homogeneous nature of Megantic County descendants. All of the county's settlers came from Ireland and Scotland in the period 1819-1835. The settlement of the county began and ended in this period, with no later influxes of settlers from Britain or elsewhere. Secondly, all the neighbouring counties were settled by French speaking descendants of the Habitants. There were no main roads and no cities in most of the townships of Megantic County. It was, for one hundred years, isolated culturally and geographically from the rest of English speaking Canada. Many Megantic boys learned that their nationality was not 'Irish' or 'Scottish' in 1940 when they enlisted in the Canadian Armed Forces.

My father's naturalization papers from 1944 say that he was British. Now, maybe that's the way Canadians were known then, but after reading the above, I wondered if it was the same thing - his ancestors were from Northern Ireland, which was and still is, British.

I'm not a genealogical person. I'm never going to trace my ancestors, but I did enjoy reading this little book about where they all came from. There was a photo of my uncles and aunt in their school days, years after my father, their brother had left school.

The author gives quite a bit of historical information about the area, and talked about it as she knew it when the book was written. She did an incredible amount of work putting this together, and generations to come will be thankful to Gwen Rawlings.
Posted by Nan