This week I thought I'd try something fun, and made three bouquets from one. I so love these flowers. 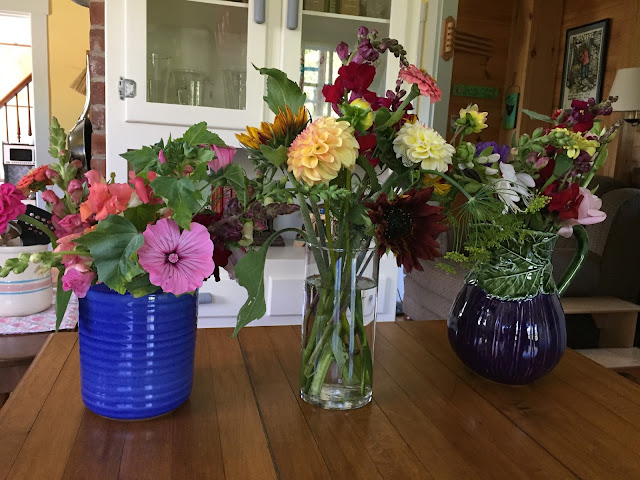 Even though the cousins see each other pretty often, it is still great fun for Hazel, Campbell, and Indy to FaceTime. What a great invention, especially for families that live far apart. 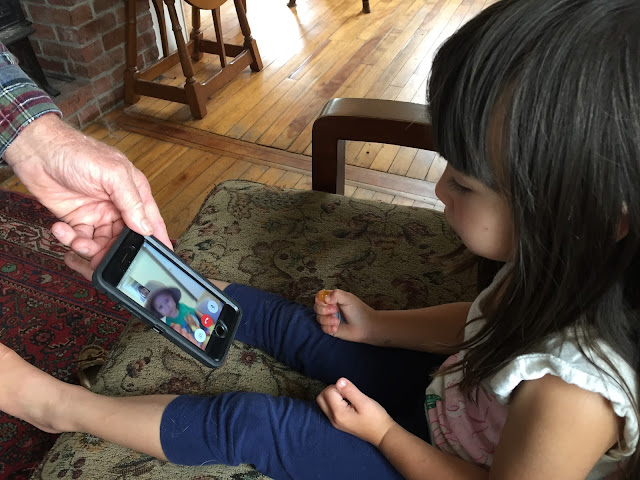 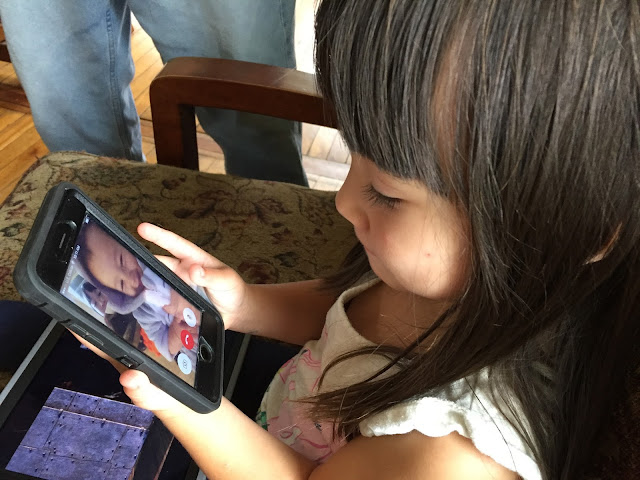 I thought after yesterday's posting I would put up some pictures of my grandmothers.

My paternal grandmother holding little 15-month-old me in 1949. You can see the stockings and shoes. And check out that hat! 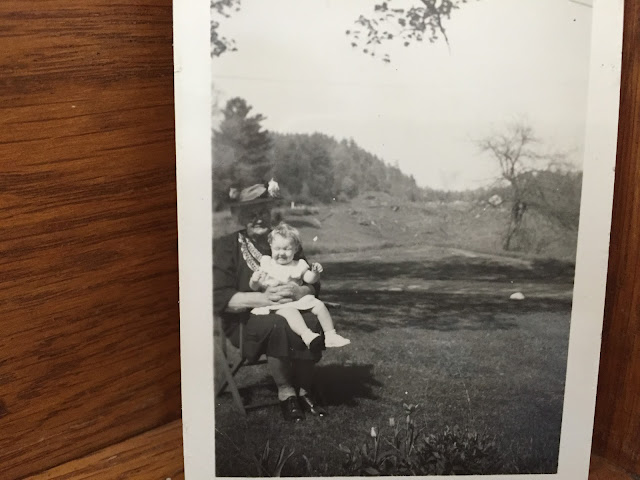 1961, on the right. It is that placid, kind expression I remember best. She lived another eight years and died at 97, I believe. She is with her first born child, Effie. Are there any Effies anymore?? 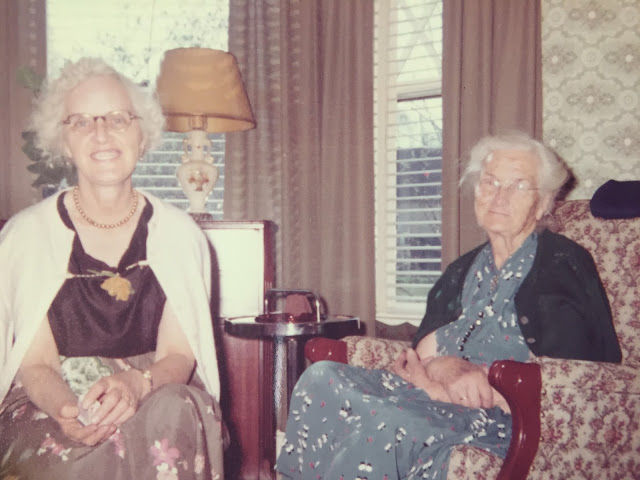 My maternal grandmother in 1929, still in the thick of raising her ten kids. At this point her oldest was in his twenties and her youngest was four. Unbelievable. 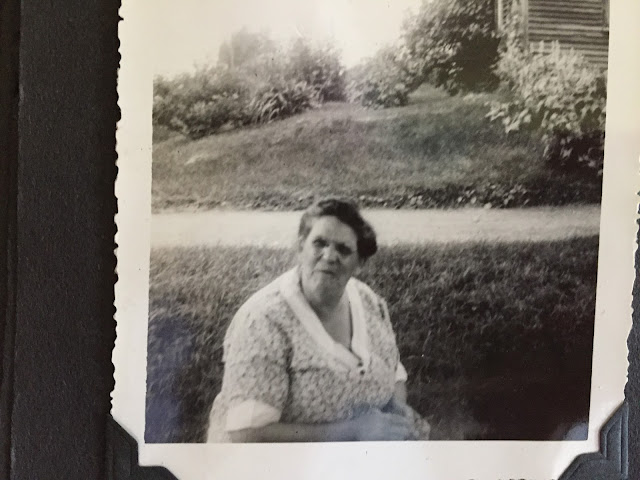 In 1961. Much the same sort of dress as thirty years earlier. She died four years after this photo, at 81. 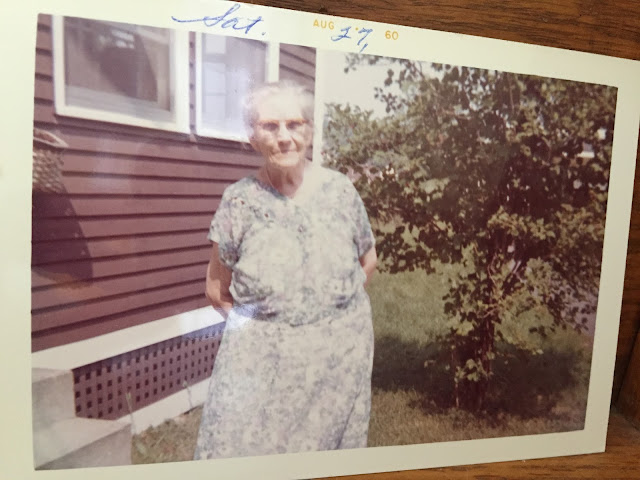 Grandmothers, then and now 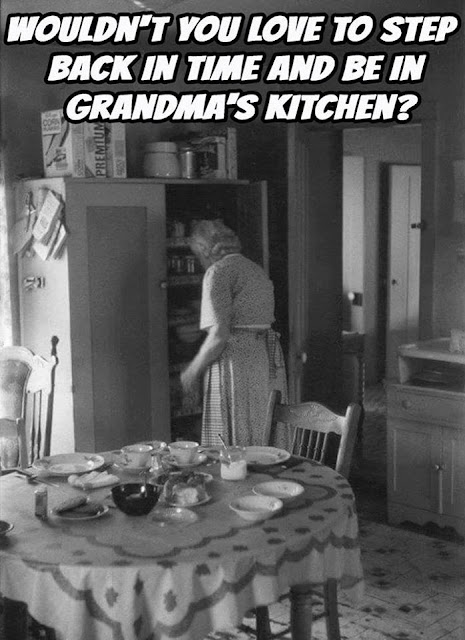 and it coalesced so many thoughts that have been swirling around in my head for the past almost 4 years since I became a grandmother. Look at that woman. Isn't that the way most of us who are in our 50s and older remember our grammies looking. Floral print dresses with a half apron tied around their waists. I can picture the shoes - what used to be called 'sensible shoes.' And one of my grandmothers had those thick, cottony, brownish stockings. As I've noted before in my letters, I have no cooking memories with either of my grandmothers, except for my paternal one making homemade bread. And even then, I didn't see her make it. She just came into a room with it. This probably happened only once. Both my grammies were old when I was born, and already had a passel of grandchildren. I didn't live in the same town as them and visits were quiet afternoons with me sitting and listening to the grownups talk. I loved them both intensely but I just didn't see them enough.

Back to those rambling thoughts. My grandchildren have seen me in a dress only once at our niece's wedding. All my shoes are 'sensible' but not those clunky, heeled ones like old women used to wear. I never wear an apron, and if I did, it would be the long ones that go over the neck. But I look at the woman in the picture and I just think she is oh, so beautiful. Maybe in my seventies, I shall begin to dress like that. But I know I won't. Dresses aren't really very practical, though I love Lily Tomlin's in Grace and Frankie.

My babysitter when I was a kid had antimacassars on her furniture. I don't know how long it has been since I've seen one. And doilies. Many of my women relatives seem to have made doilies. And they embroidered pillowcases. All gone. Or at least they aren't anywhere in my travels.

I'm not one of those women who try to look young. I'm 69 and look every year of it. I'm happy with my grandmother status. But I feel kind of badly that Hazel, Campbell, and Indy won't ever see that woman in the picture. I have taken to wearing my hair back in a clip which feels 'grandmotherly' to me, but I think there will have to be another wedding before the kids see Nana in a dress again.

Here's a goofy-pose picture Hazel Nina took recently. I don't often put up photos of me, but I thought it fitting for this post. 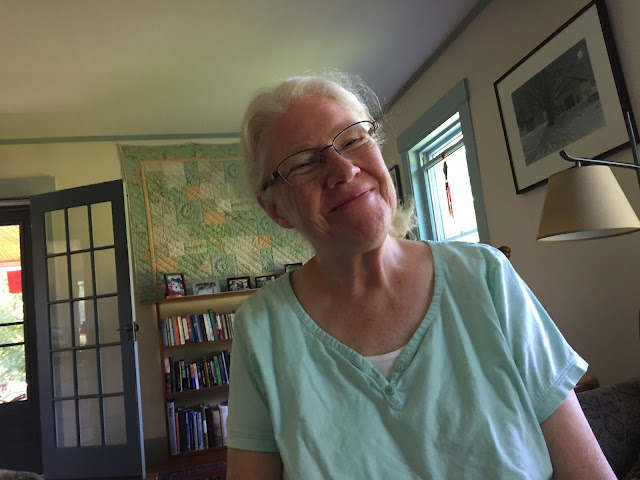 My daughter's enthusiasm for The Great British Bake Off (or hashtag GBBO, as it is known in social media) convinced me to give it a try. Well, I went through all three seasons on Netflix streaming and the fourth season on PBS, one right after the other. I am now a huge fan.

Over here, we don't have the first few series that were on in England. Our 'first' season is really the fifth. And I also see that our 'second' season was actually the fourth over there. I so don't understand how television works. Why can't all the shows be on over here, and if not, why can't the ones we have be shown in order?? Despite that little annoyance, it is THE BEST SHOW!

I have learned so much about cooking. I've bought three cookbooks, one by Paul Hollywood, and two by one of the contestants, Chetna Makan. I follow several of the contestants on Instagram and Facebook. I also have subscribed to Chetna's YouTube channel, Food with Chetna. This recipe comes from her. I love the way so many Indian dishes include potatoes, my personal favorite food. Here is the video of Chetna making Masala Alu, Spicy Potatoes.

I followed it exactly except I had no chili peppers, and I forgot to substitute chili powder. Next time. And there will be a next time because we loved it! I was able to buy fresh curry leaves online from Mr and Mrs Amazon. I had white mustard seeds not black. I chopped the ginger the way she did, but another time I think I'll try grating it. I didn't top with coriander because I am not fond of it. I didn't use mango powder because I didn't have any. Will look in the store or online for it. I have never used in cooking before:
curry leaves
mustard seeds
garam masala
ginger 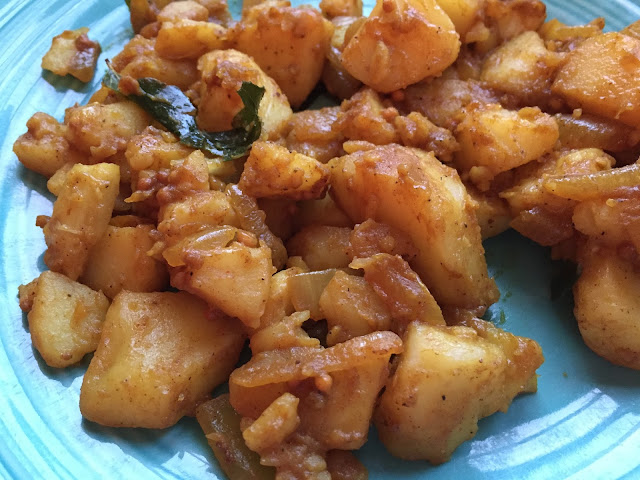 And a cool little aside. One of the baked goods from Season 1 (in the US), episode seven was a Breton pastry that no one had heard of or could pronounce. Kouign-amann. I had to write out a way to remind me how to say it. As near as I got it - cooweenamon, with the accent on the last syllable. It is the pastry that most appealed to me on all the shows. And miracle of miracles, a young couple have bought an old farm in town, and are doing various things to support it. One of them is pastries. The woman used to work in a French bakery, and her work is divine. She sells her wares Friday, Saturday, and Sunday, and believe me, we are there all three days! Croissants, brioche, cookies (sables), and yes, Kouign-amann. It is the most delicious pastry I've ever eaten. And it is a big hit among her customers. We take care of Hazel Nina on Fridays, which we now call pastry day! She used to be a croissant girl, but now she requests the 'ticky' (sticky) one, which is the Kouign-amann. 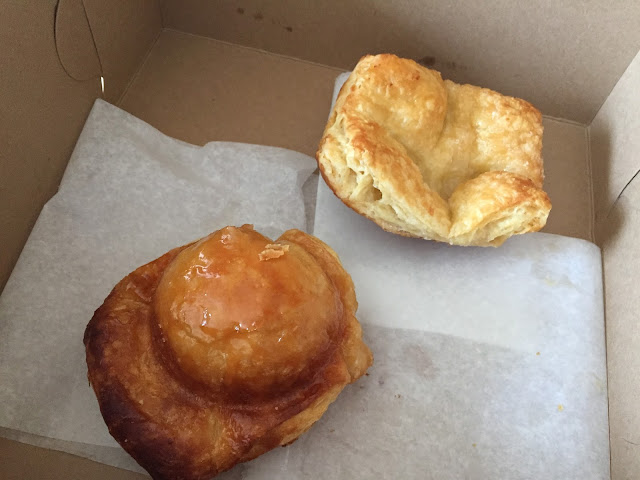 I haven't had much chance to write my blog (or read blogs) this summer, but finally here is something to offer for Weekend Cooking. 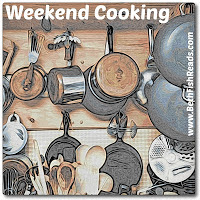 Last September I took note of the blueberries we bought from our neighbor. Today I froze the last batch of the 2017 season, and there is quite a striking difference from 2016.

Here is the breakdown for this summer.

Price was same as last year, $5.50 per quart, and worth every penny. Buying organic blueberries in the store costs a lot more, and they rarely come from the US. Serbia and Turkey, most often. These are as locally sourced as possible without growing them ourselves.
Posted by Nan 7 comments: 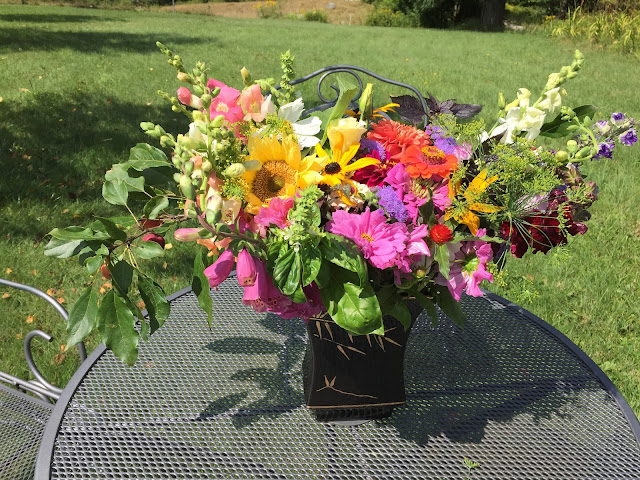 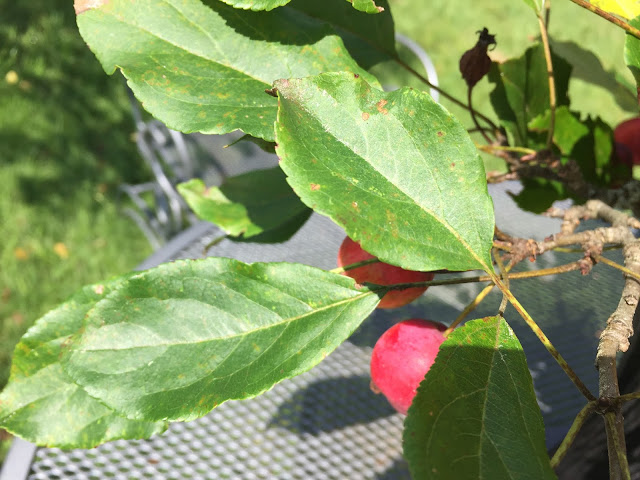 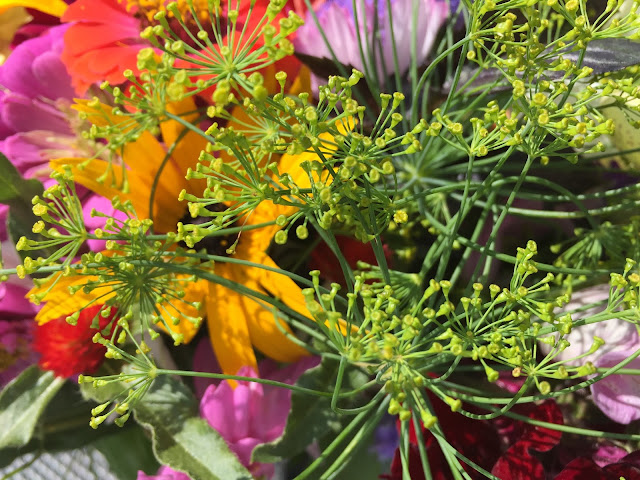 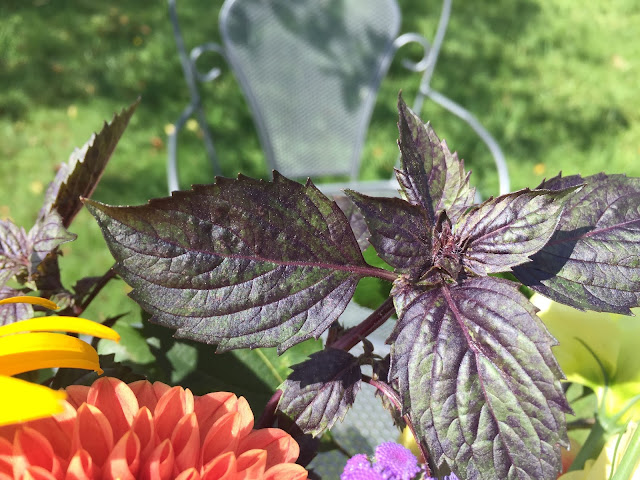 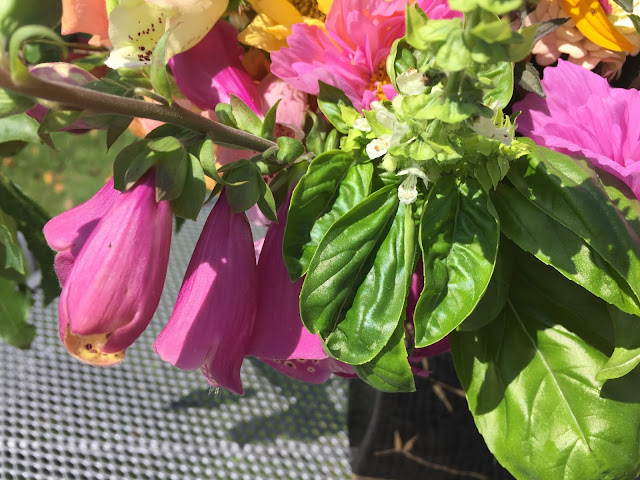 I thought I'd show you how they look before I put them in a vase. These flowers truly take my breath away. Such color. The essence of summer. 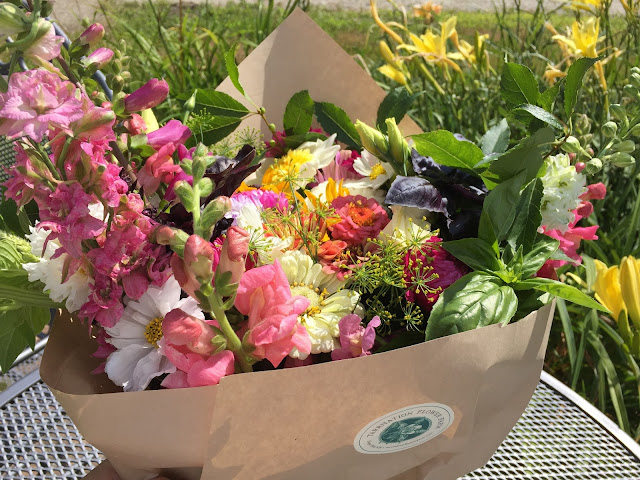 And in the vase which is always on the wood stove, being the only place in the whole house which is safe from Raya the cat who would munch away at them. 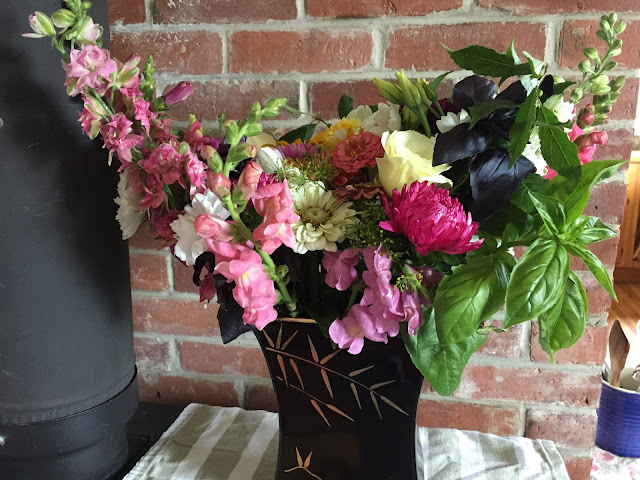 As you see, there is plenty of basil for this week's pesto!
Posted by Nan 11 comments:

Today's beautiful flowers are back in my mother's vase. 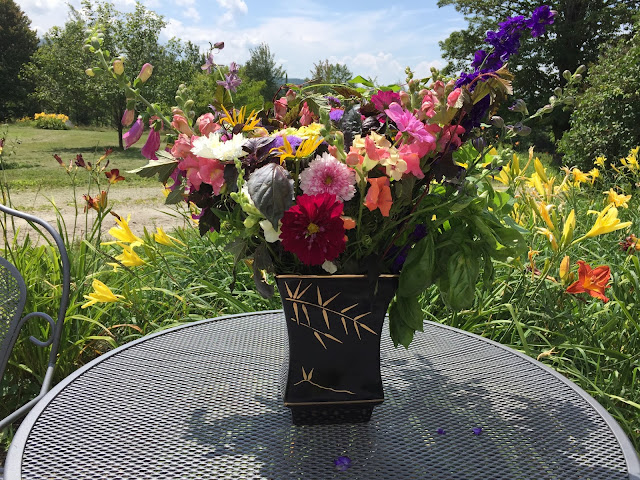 Check out all the basil! Both purple and green. Pesto coming right up! 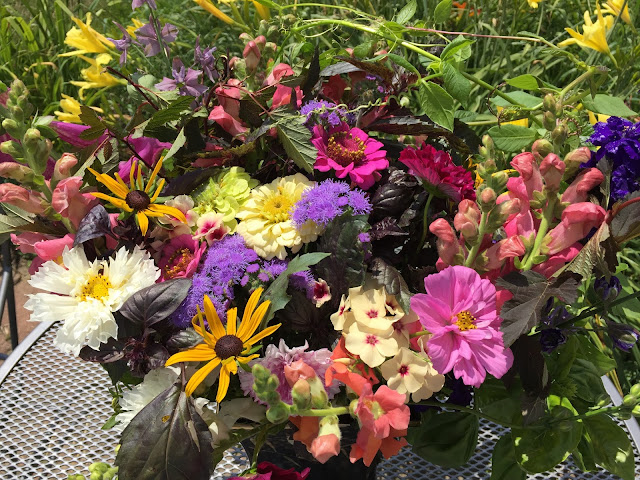 Cooking something delicious is really more satisfactory than painting pictures or making pottery. At least for most of us. Food has the tact to disappear, leaving room and opportunity for masterpieces to come. The mistakes don't hang on the walls or stand on shelves to reproach you forever. It follows from this that the kitchen should be thought of as the center of the house. It needs above all space for talking, playing, bringing up children, sewing, having a meal, reading, sitting, and thinking. . . . It's in this kind of place that good food has flourished. It's from this secure retreat that the exploration of man's curious relationship with food, beyond the point of nourishment, can start.
Jane Grigson, Good Things 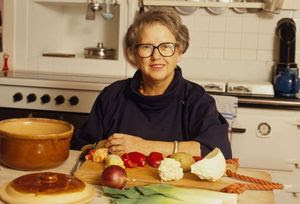