This was taken at our niece's wedding in April. When did my babies turn into thirty-somethings?! 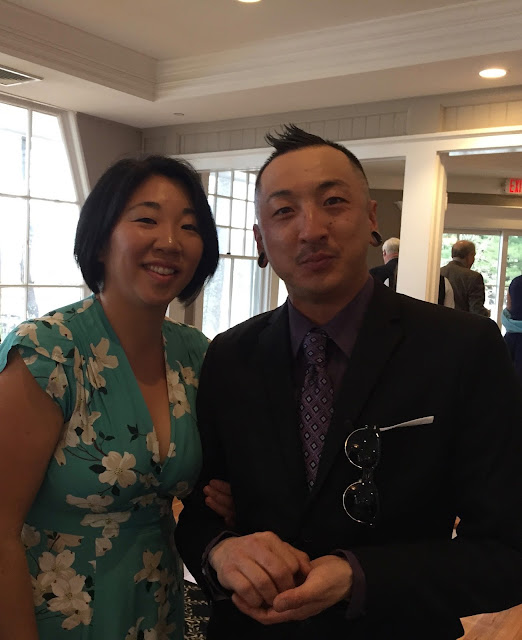 Like many others, I've spent a lot of today looking at youtube videos, and listening to my old Eat a Peach record. This is one of my very most favorite songs. Last year it was played at the memorial service of a man who died way too young, and I thought it was a nice way to pay tribute to Gregg Allman. "Soulshine, it's better than sunshine, it's better than moonshine, damn sure better than rain."

And then this wonderful performance of Melissa. The person who put it up said, "Calm the sadness and play the tunes while Duane welcomes him with open arms."

It has been over a year since I've posted about an afternoon with Hazel Nina. The months and years are flying by. I keep meaning to post, but just don't have the time or energy sometimes! None of these photos is particularly great, but I took them to show her mummy what she did during the day. Margaret called the texts a "picture book of the day." 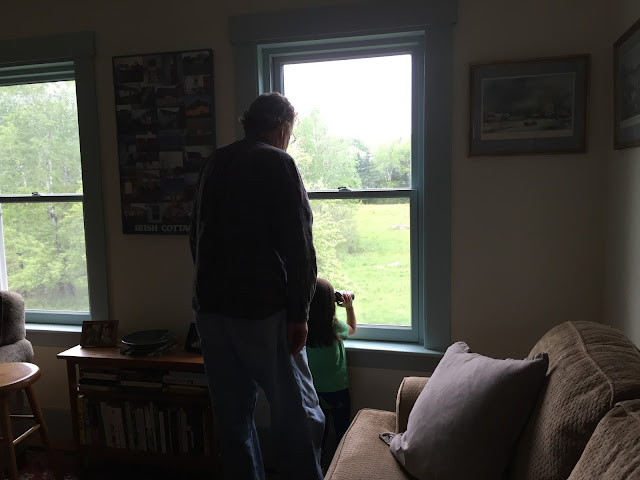 This is really blurry, but she was just so cute. She had to have "tea with Pop." They had Earl Grey, and then she and I had chamomile. 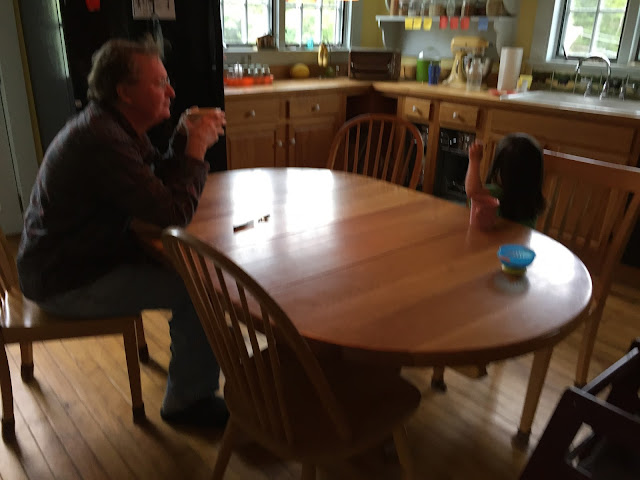 Making popcorn. I used Arrowhead Mills organic popcorn, and made it right on the stove in a big pot. 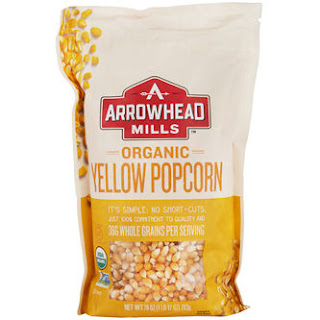 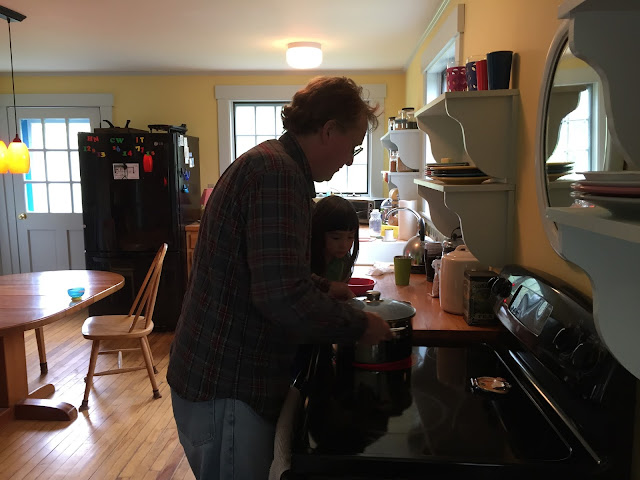 Hazel said it was "the best popcorn ever!" 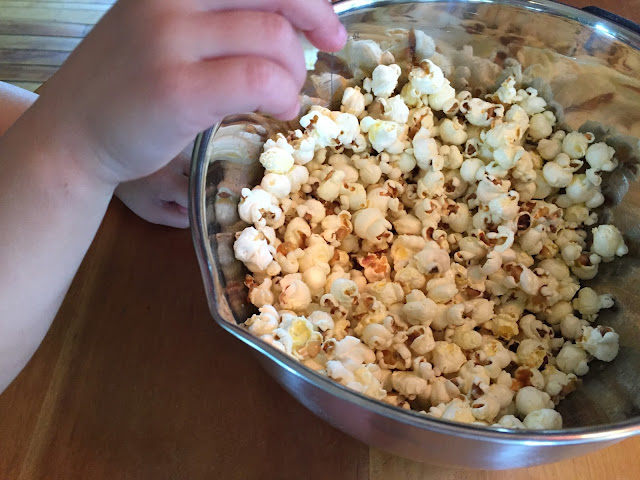 Then we watched the most wonderful children's show I've ever seen. It is called Emma and Grandpa. It goes through an entire year, month by month as a little girl and her grandfather explore the beautiful English countryside. We had a video of it when the kids were little, and a few years ago I went looking around the internet, and found a place I could buy a DVD. The new one is so much better because it is narrated by someone with an English accent. My video was narrated by Shelley Winters. Why? I can't imagine who thought that was a good idea for a movie about a little English girl and her grandfather! There is an interview with the grown up little girl all these years later. You may read more here, if interested. 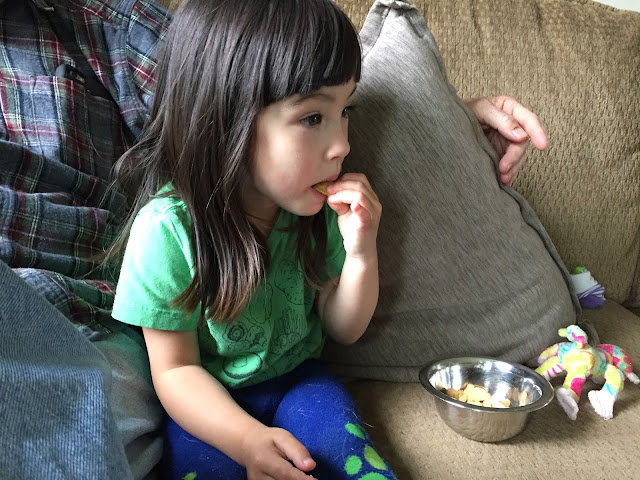 She got a little sleepy so we thought we'd take a ride, knowing she would fall asleep, and she did. We got back as Matthew was coming home from work, and he brought his sleeping girl inside. I'll really try and write more often about our afternoons with all the grandkids. They are growing and changing so fast.
Posted by Nan 14 comments:

Labels: An Afternoon with Hazel Nina

Mrs Bale is shocked by the heat!

Mrs Bale says, "oh, no" when she sees the temperature! Addendum: We had a thunderstorm Thursday evening which brought the temp way down. At 9.30 Friday morning, it is almost 30 degrees cooler, and Mrs B shouts, "hooray!." 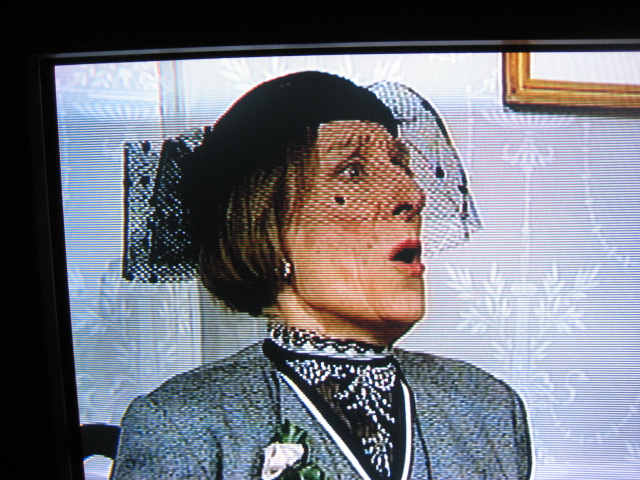 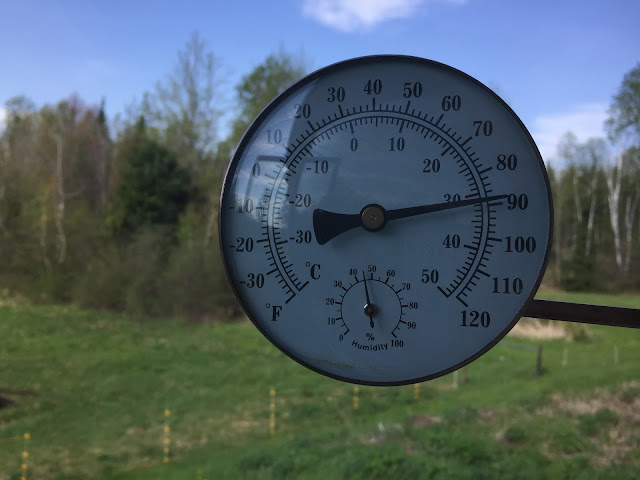 Today's picture/Words on a car

Margaret saw this on a car at work and sent it to me. I love it! 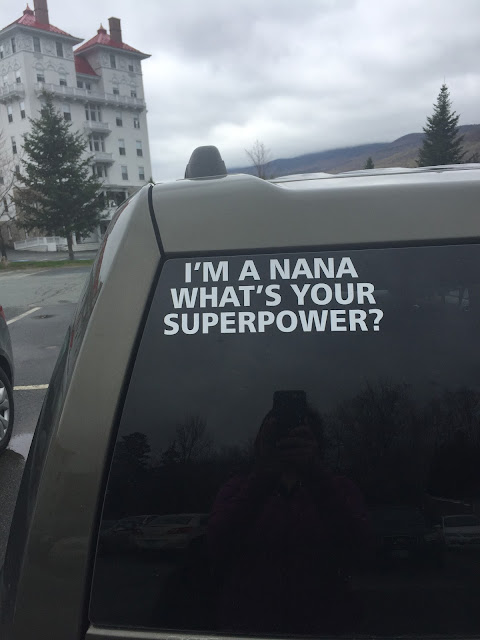 Kay and Hayden come for a visit!

On the first of May, Tom and I had very special visitors. Honestly, our excitement couldn't have been more if it had been Queen Elizabeth and Prince Philip!

I met Kay, whose blog you may visit here, on the internet 20 years ago. In 1998 our family visited Texas and met Kay in person, at a bookstore of course.

This year she and her husband were coming east for a mystery conference for her, and a work conference for him. His was in Boston which is only three hours away. Tom and I were going to go down and see them but they decided to come to Windy Poplars Farm! They stayed in a local B&B. We went out to supper at the local diner, and then the next morning they came to the house and spent some time. Tuesdays we take care of Hazel Nina so they all got to meet. Sadly, sadly they could only spend the one night, but how wonderful our visit was. We are already talking about another trip to Texas. They are two of the.nicest.people.ever. We felt so comfortable with them, as if they were family or old friends as, indeed, Kay and I are. We've talked via yahoo groups and then email groups, and blogging, and now texting about most everything, and she probably knows my heart and soul better than many people I know.

Here are some pictures from our get-together. 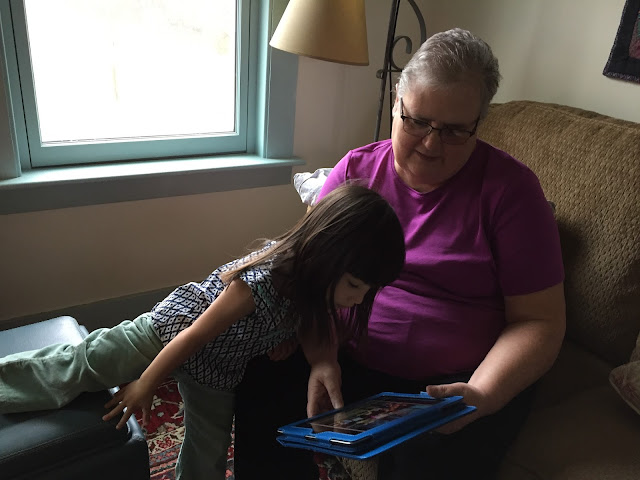 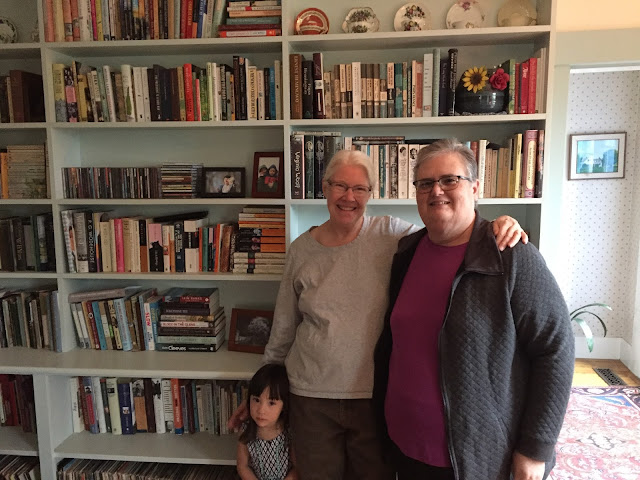 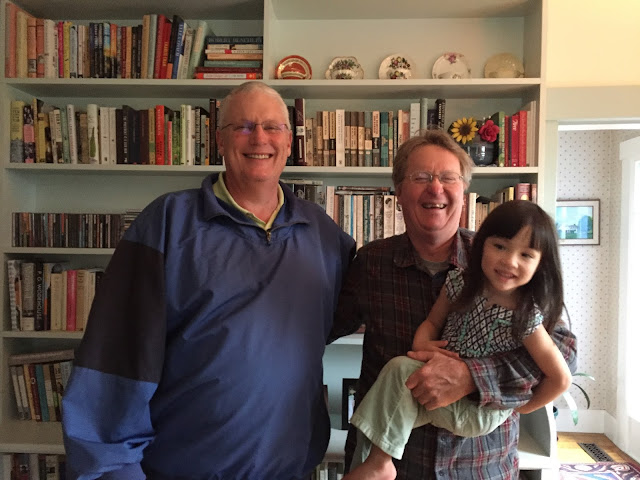 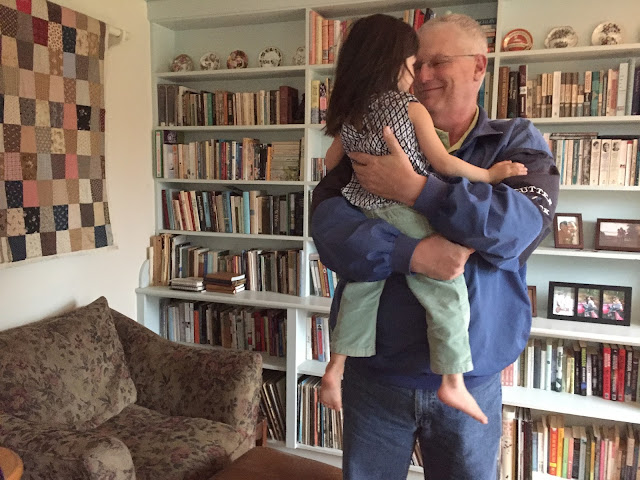 Quote du Jour/Mrs Bale in As Time Goes By 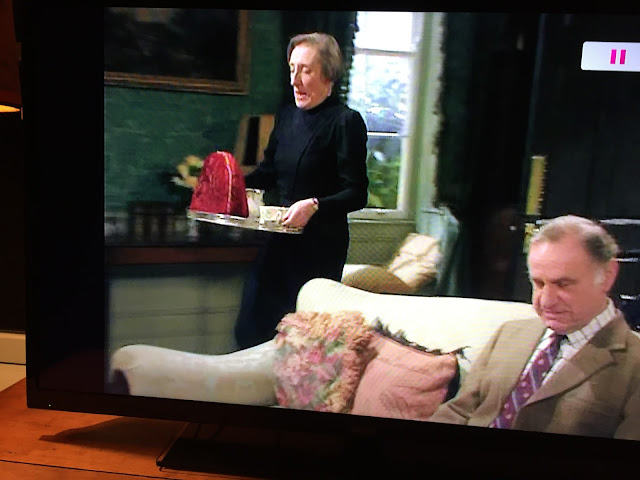 I'm watching the whole series of As Time Goes By again, and this made me laugh.

Mrs Bale brings in tea to Lionel and Jean.
Lionel says, "On the dot, Mrs Bale." (she had said tea would be served in "exactly 17 and a half minutes.")
Mrs Bale responds: "I was born promptly and saw no reason to be anything else for the rest of my life."
Posted by Nan 18 comments:

Today Margaret was here and decided to pay a bill via her bank's site on our computer. She couldn't sign in using Chrome. There was a pop-up message that said the problem was with cookies. Tom went into Chrome preferences, and saw that the "block third party cookies and site data" was checked so he unchecked it, and voila, Margaret could get into her account, and I am now signed into my blog via Chrome.

So, here is what had happened. About a month ago, we started getting weird spam in our email inbox. Tom thought maybe it had to do with cookies so he went into Chrome and checked the box that said: "block third party cookies and site data." This is what made it impossible for me to post on my blog via Chrome. So now, I'm all set.

I posted to a Google forum the other day about the problem, and I got an email back that I hadn't had a chance to read yet. I just did so, and it said to try to "enable third party cookies."

I thank you all for your responses to my post about maybe switching to Wordpress. I still may do so, but for now will just stay here.
Posted by Nan 12 comments: