I found this article here, and all the words in my post come from there. I've known the poem a long time, and I love it.

Song for a Fifth Child was only one part of the life journey of Ruth Hulburt Hamilton. 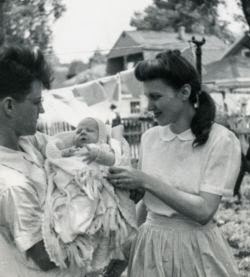 Ruth was the mother of four children aged 11,9,7 and 5 when her fifth child, Jane, was born. “The children were all older when Jane was born and they would rush home to see her and hold her. Since there were five years between my next youngest and Jane, I had a bit more quiet time with her.” Ruth recalls.

Ruth’s daughter, Jeremy, remembers well how her mother rocked her and sang with them as children. Some of their favorite songs were “The Lake Isle of Innisfree” and “Dark Brown is the River.”

Ruth was born in Kirksville, Missouri in 1921 and she lived most of her life in Oak Park, Illinois. She married when she was 23 and became a mother for the first time at 25. Her poem, Song for a Fifth Child, was published in Ladies Home Journal in 1958 and has found a treasured place in the hearts of mothers for generations. 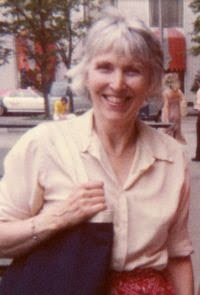 It honors the everyday efforts of motherhood. It honors the sacred in the mundane and the tensions that pull at us all as mothers. Bills, errands and housework will always be there and yet we must rock while we can.

Ruth’s poem has often been misquoted. It is published here in its entirety with permission from the author. Enjoy.

Mother, oh mother, come shake out your cloth!
Empty the dustpan, poison the moth,
Hang out the washing and butter the bread,
Sew on a button and make up a bed.
Where is the mother whose house is so shocking?
She's up in the nursery, blissfully rocking!

Oh, I've grown as shiftless as Little Boy Blue
(Lullaby, rockaby, lullaby, loo).
Dishes are waiting and bills are past due
(Pat-a-cake, darling, and peek, peekaboo).
The shopping's not done and there's nothing for stew
And out in the yard there's a hullabaloo
But I'm playing Kanga and this is my Roo.
Look! Aren't her eyes the most wonderful hue?
(Lullaby, rockaby, lullaby loo.)

Oh, cleaning and scrubbing will wait till tomorrow,
But children grow up, as I've learned to my sorrow.
So quiet down, cobwebs. Dust, go to sleep.
I'm rocking my baby. Babies don't keep.

Thank you Ruth Hulburt Hamilton for affirming our priorities as mothers and reminding all of us to put our babies first and let the rest go.
Posted by Nan 21 comments: 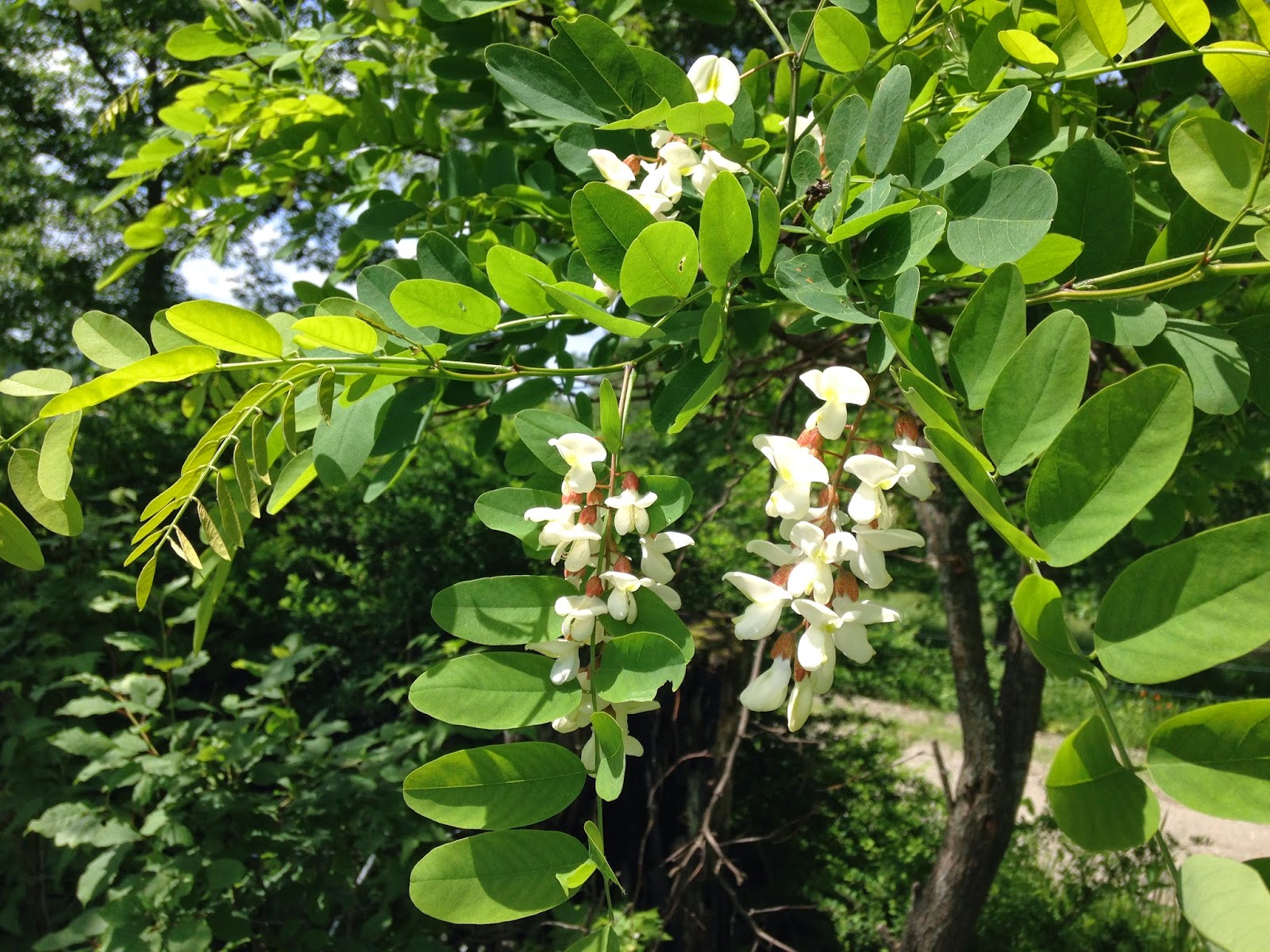 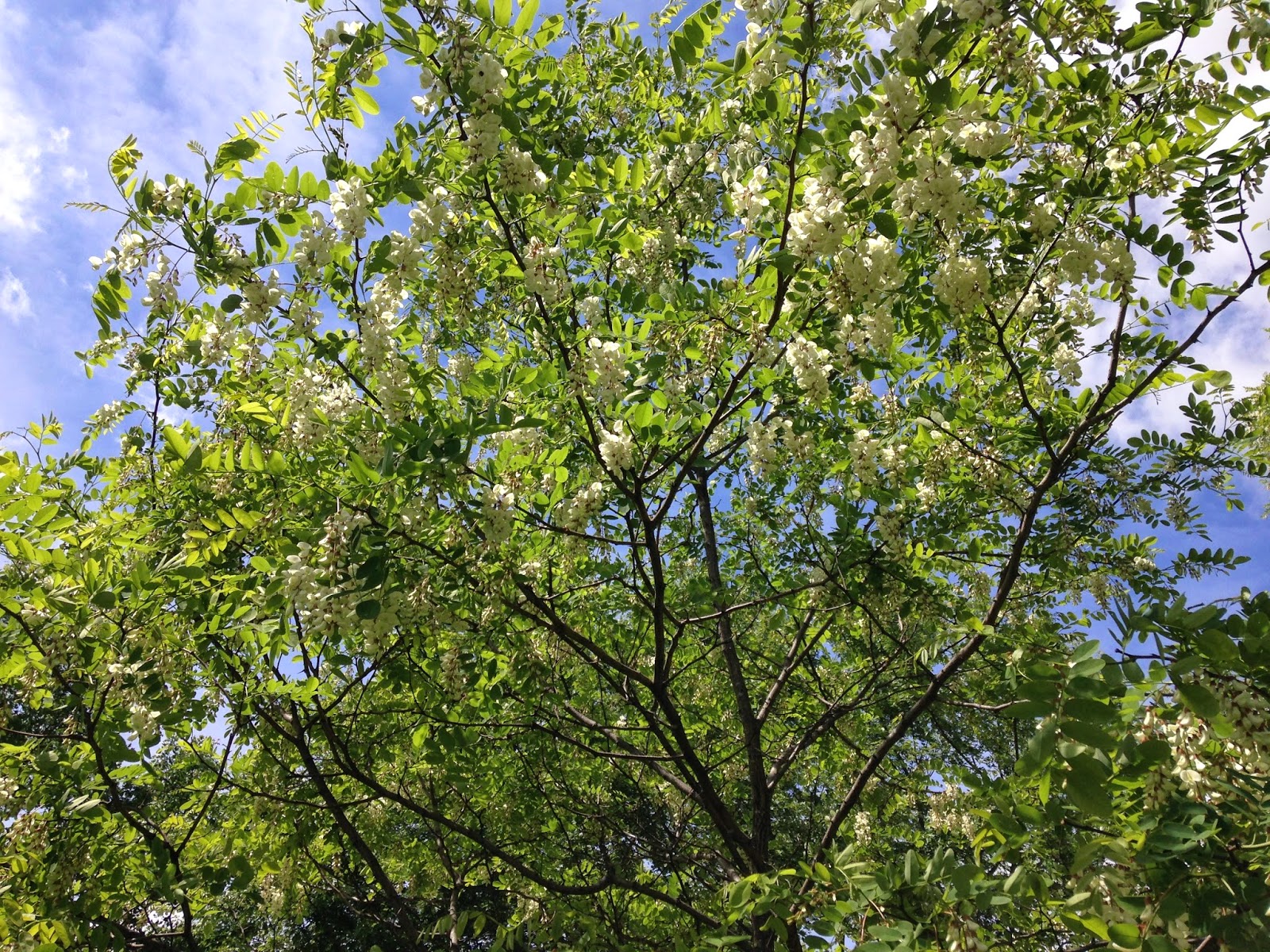 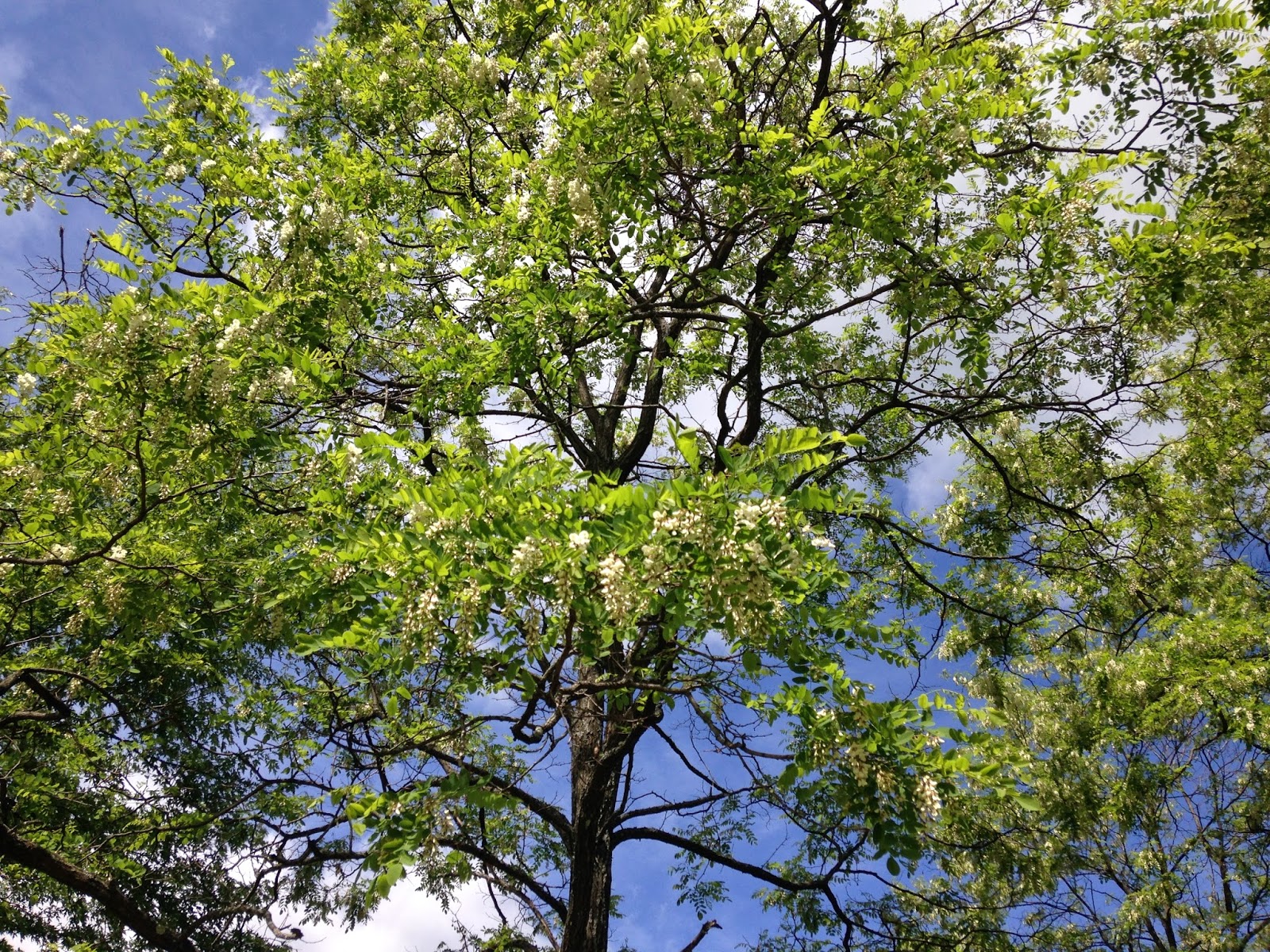 A short time ago, the black locusts were in such contrast to all around them. The grass was so green, The maples were in bright green leaf. The lilacs were blossoming. And there stood the locusts - bare, stark, autumn-like in the heart of spring. It occurs to me that this is on purpose. They let everything else get all the 'wows' of springtime, when every single day brings something new and remarkable. Then, when the daffodils are gone by, and the lilac blossoms are no more, those creamy white flowers appear which to my mind offer the sweetest smell imaginable.

When I have mentioned locust flowers in my letters, some people have commented that they are like the fragrance of wisteria, the plant oft mentioned in literature. Do locusts get mentioned in fiction? Not in any book I've ever read. And in nonfiction, mostly they are written of as weed trees, springing up everywhere. This is so hard for me to understand. They are beautiful trees in leaf, in flower, and even when they are bare. I grew up with them in my yard, and when Tom and I moved out here, I had to plant black locusts, the greatest gift of my June days.
Posted by Nan 21 comments:

A Year of Afternoon Gardens - June 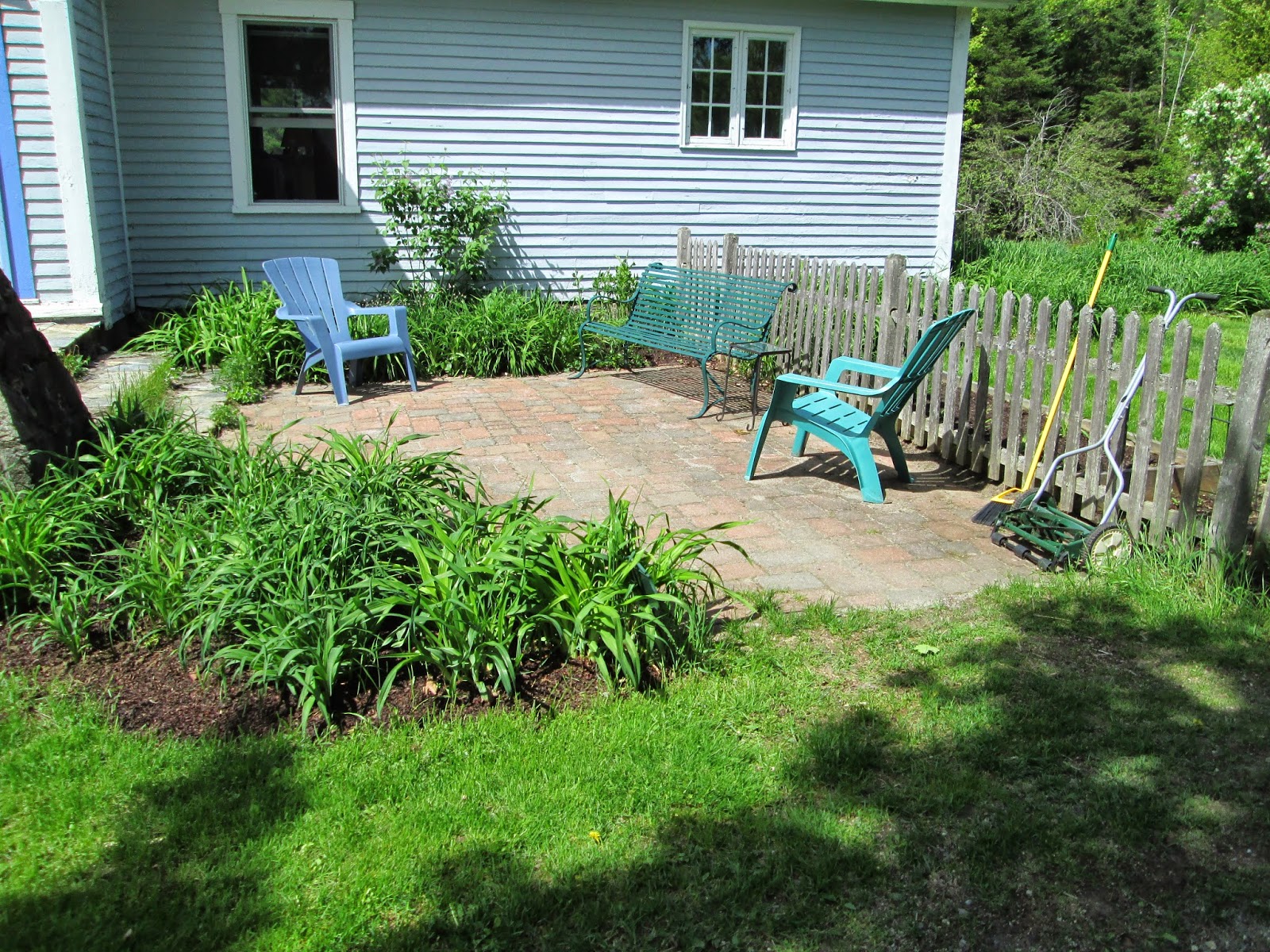 Green!! We've finished the work on the patio gardens, at least for this year. We'll see how the plants all look when summer comes. As I mentioned in the May post, we removed a few day lilies from the left day lily garden, and you can see that there are still plenty left to fill out the space. I never make note of the colors so it is an annual surprise when they blossom. The garden by the wall now has chives, aquilegia, baptisia australis, orange day lilies, other day lilies, violets, mallow, catnip, bearded iris, and a little lilac bush. 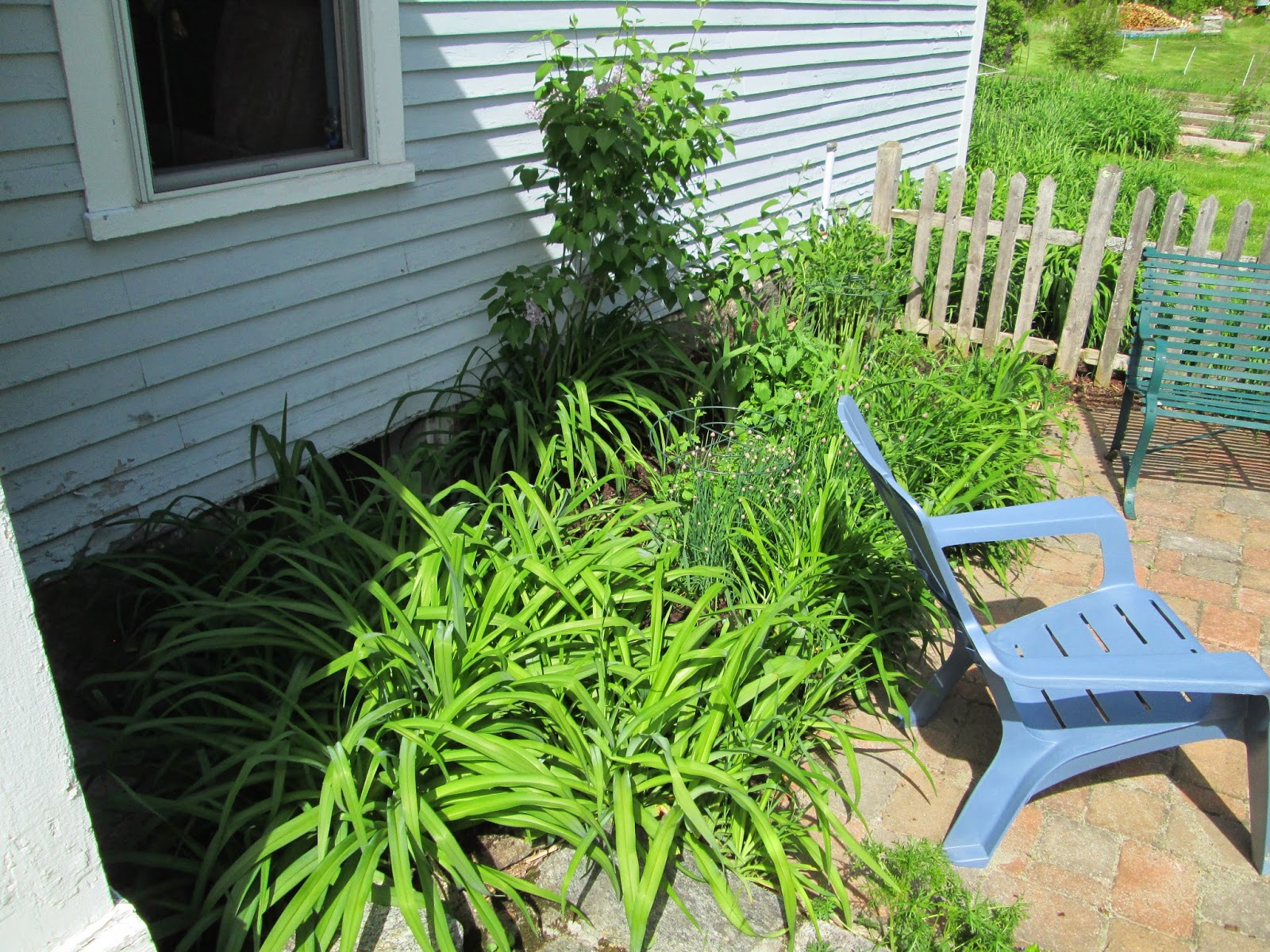 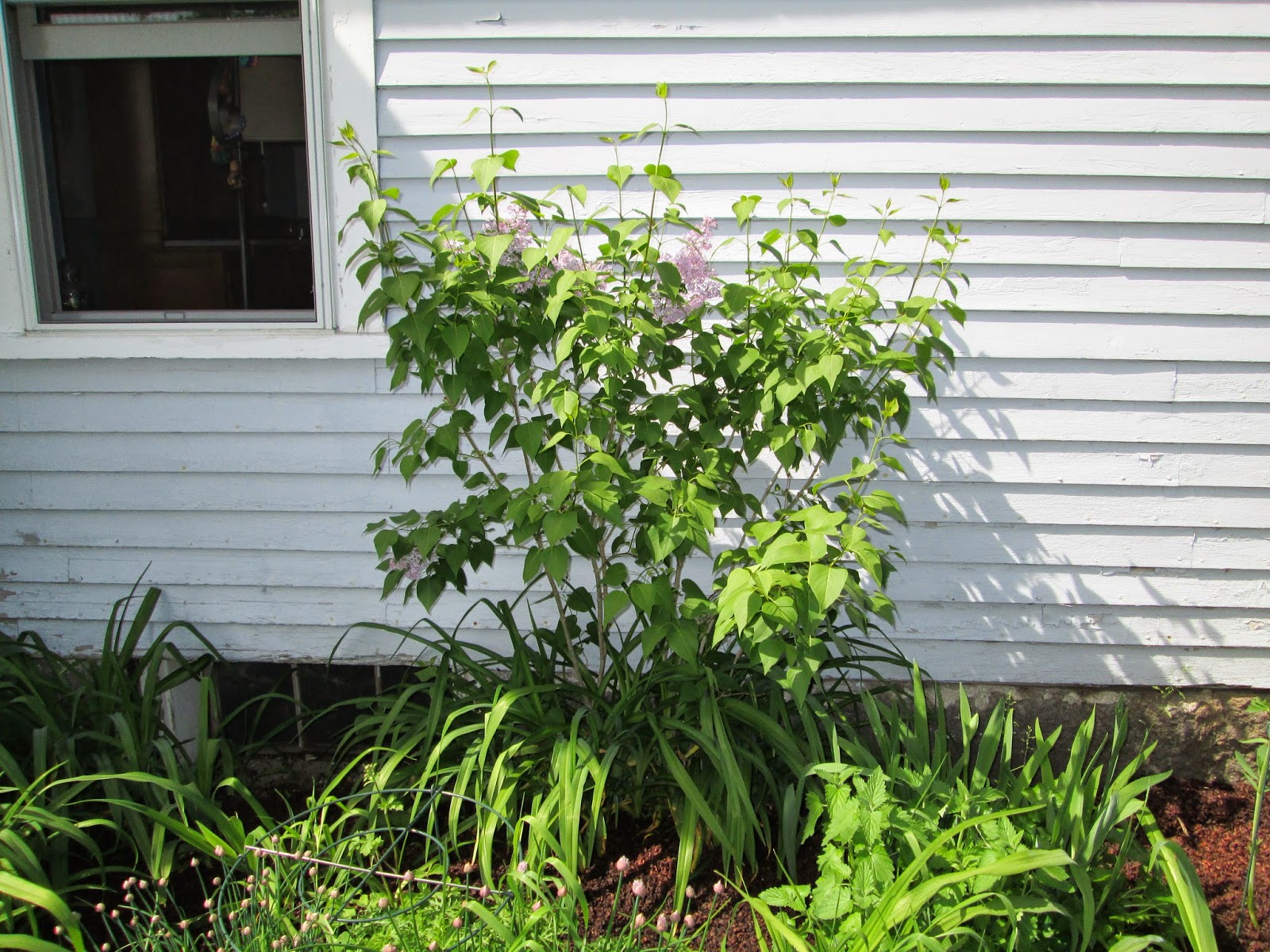 We moved the phlox from one side of the fence to the other, where the day lilies used to be, to give it more room. 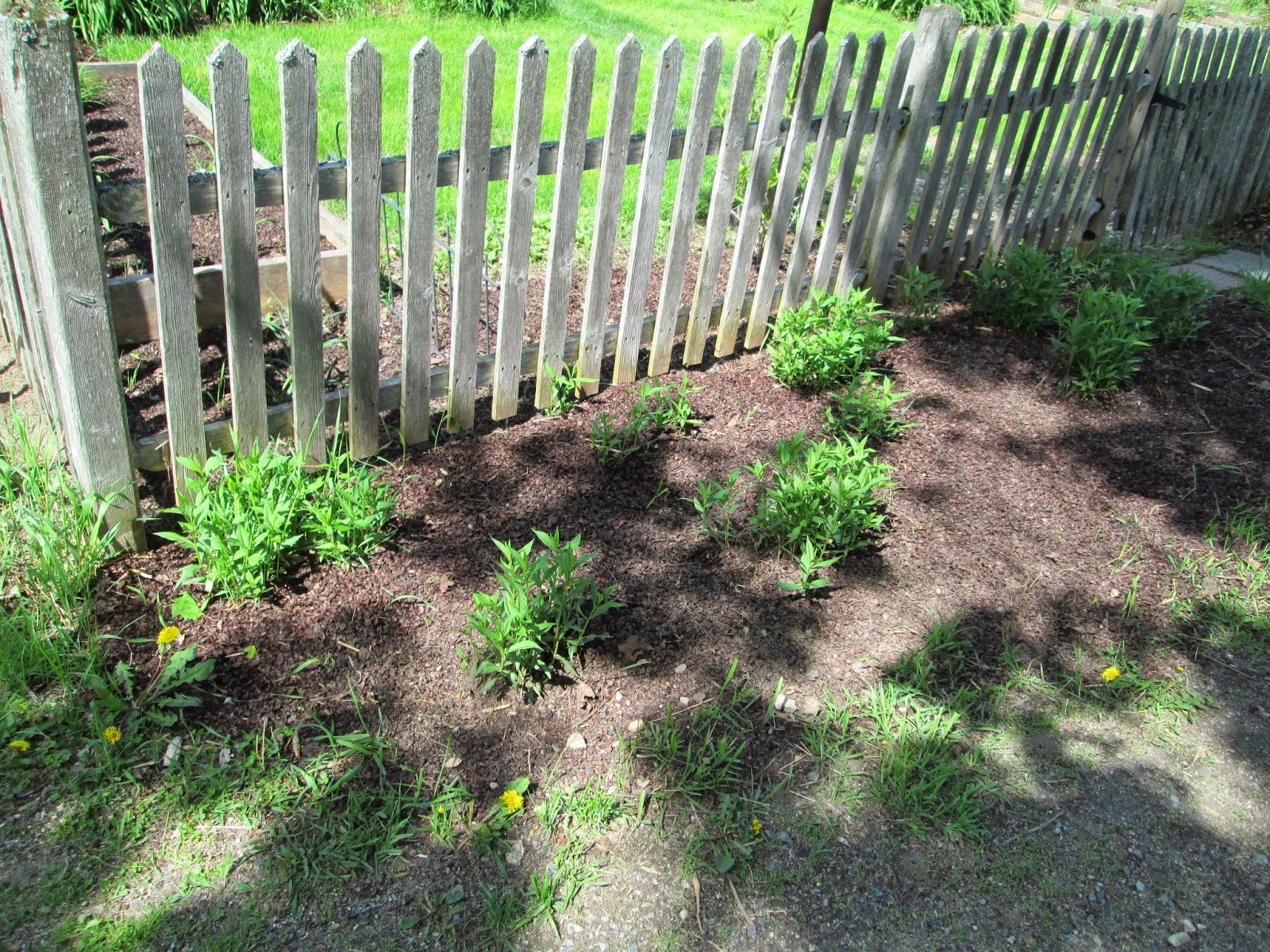 and planted a forsythia where the phlox were. I've never grown one before but this one is supposed to be very hardy for my zone, so I'm hoping. Those yellow flowers are just so cheerful in the spring. I'm thinking of planting some crocus beside it in the fall. 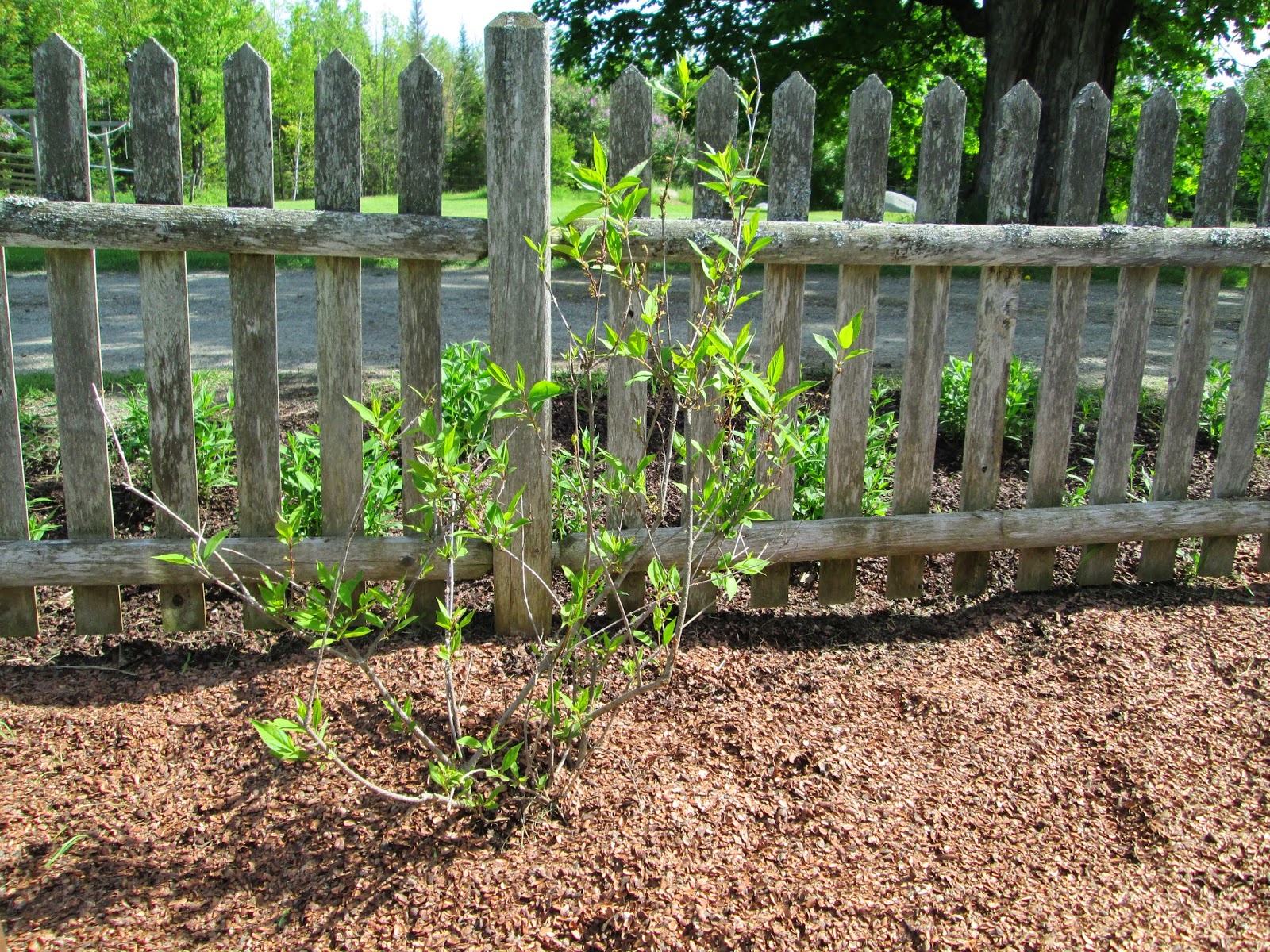 The day lily garden near the forsythia, is a new one we put in last September. We planted Hush Little Baby, in honor of the grandchildren who weren't even born when we planted them. My friend Judi gave me some orange day lilies that aren't the common ones, but a kind of frilled edge variety. I posted a picture of them seven years ago and you may see it here, the fourth photo down. And there are couple others that came free with the Hush Little Baby plants called Fulton's Ford, a 'peachy yellow' variety. I also planted another orange one called Primal Scream. So this should be a beautiful little area of color. I do so love day lilies. 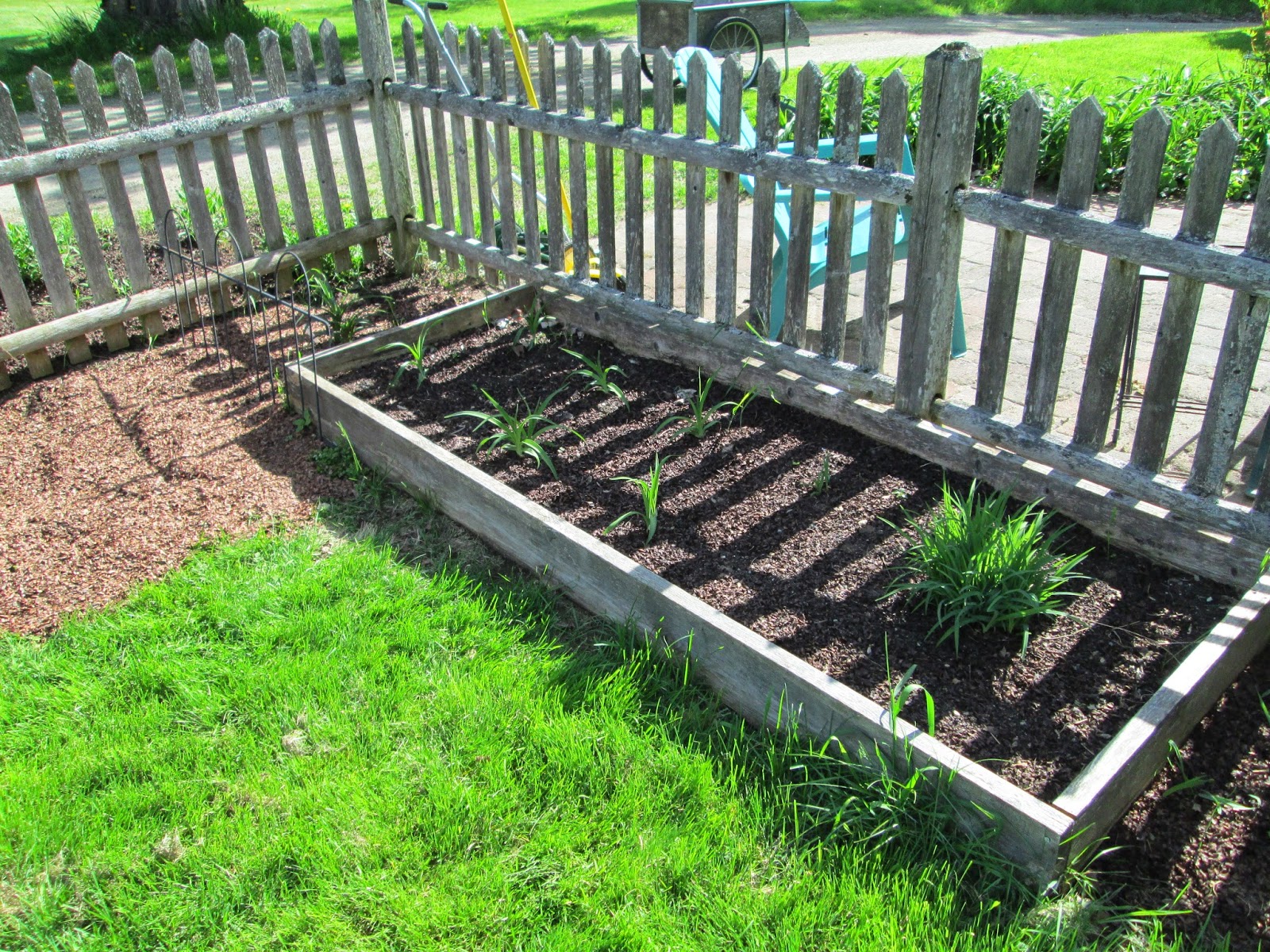 The garden on the other side of the patio, the terrace garden is doing great. We thinned out the day lilies there, as well. Just now, the bleeding heart, lily-of-the-valley, violets, and lilacs are in bloom. 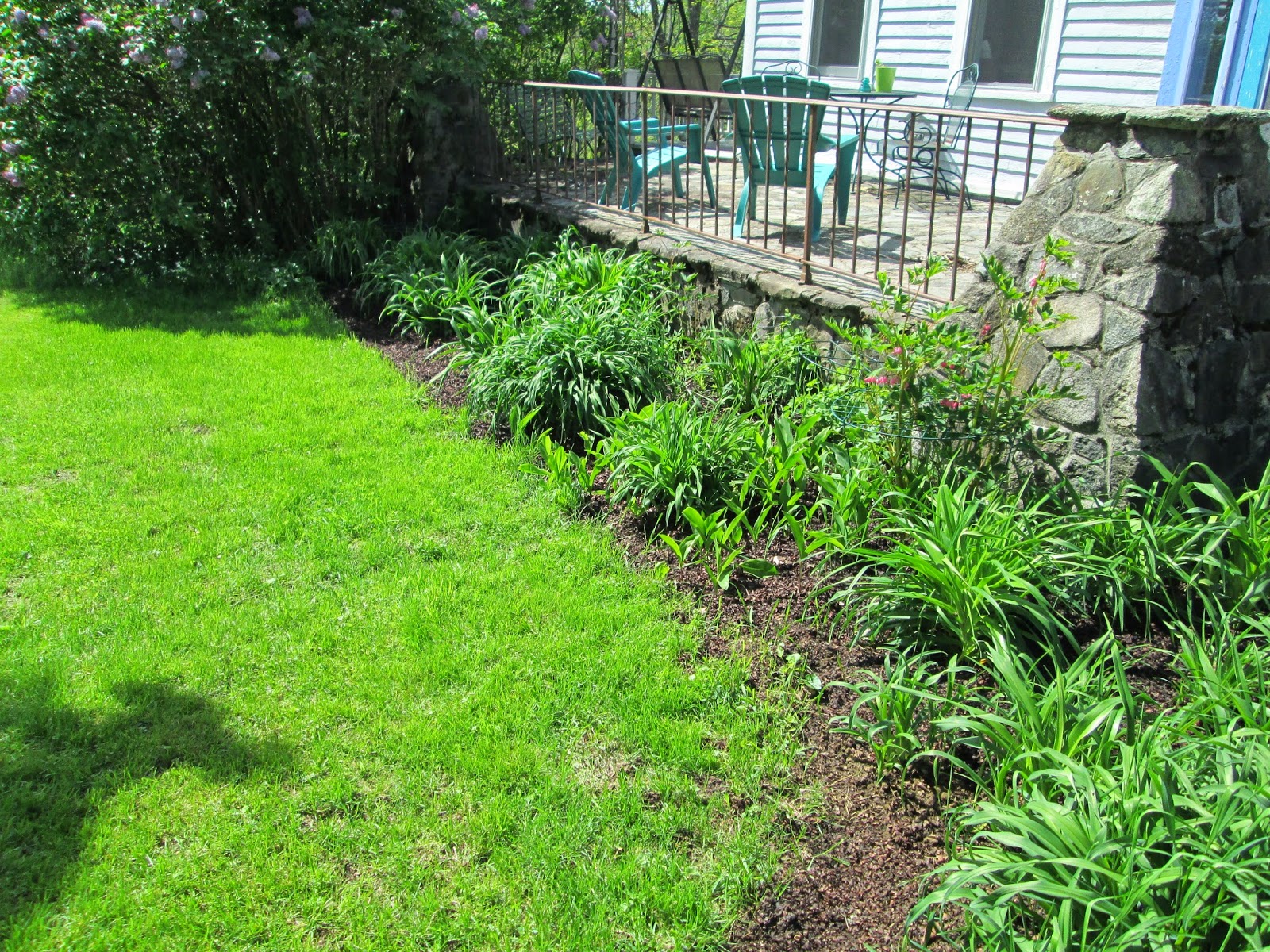 Meanwhile, in the flower garden formerly known as vegetable, there are now day lilies, Siberian iris, the six peony plants we put in a couple years ago, and the new Walker's Low catmint. This week we'll plant yellow beans along the bean pole, and we've decided that is the only vegetable we'll have in that garden. We had thought we'd do lettuce, but local lettuce is already in the store, and it just seems silly to bother. 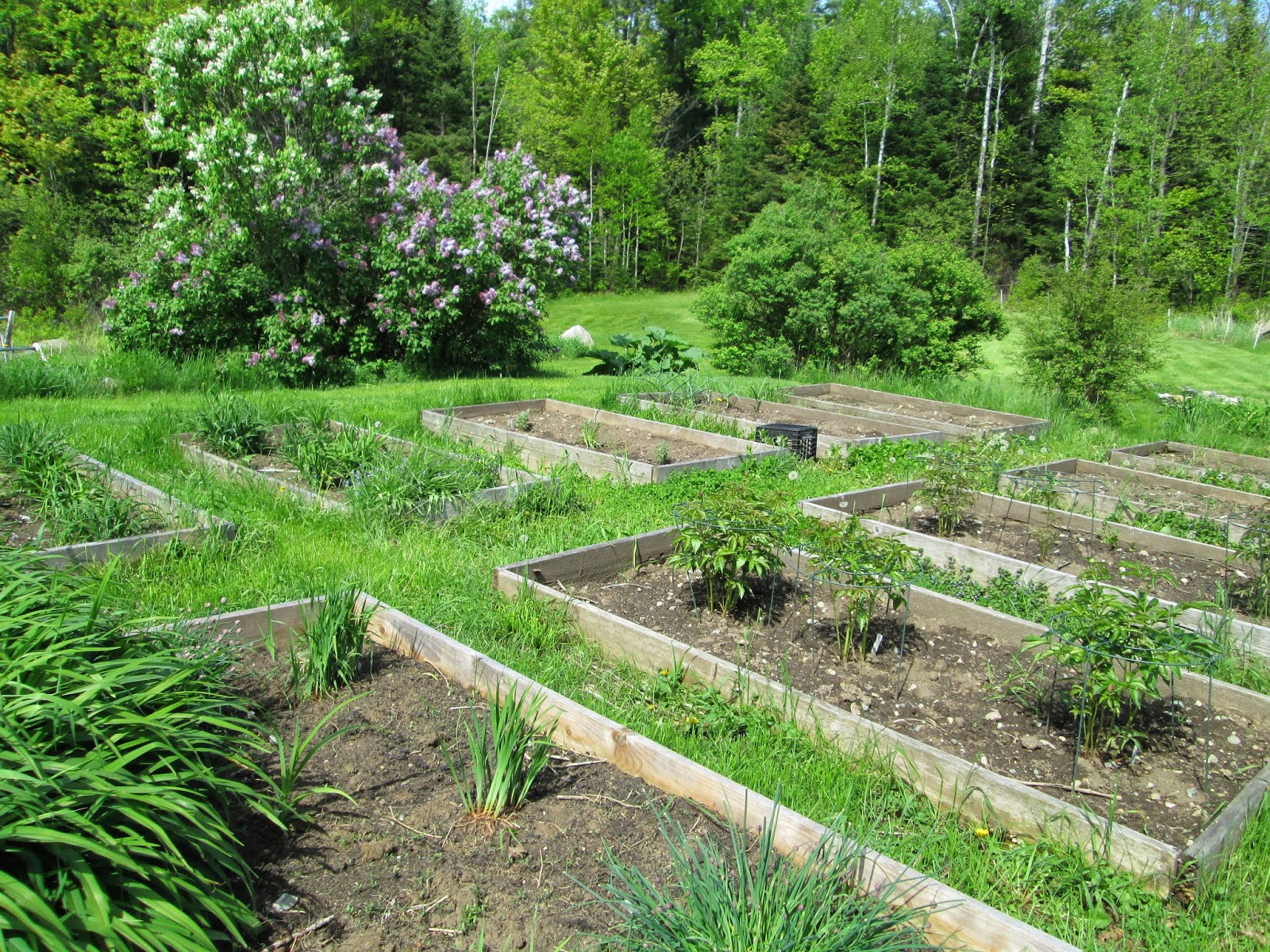 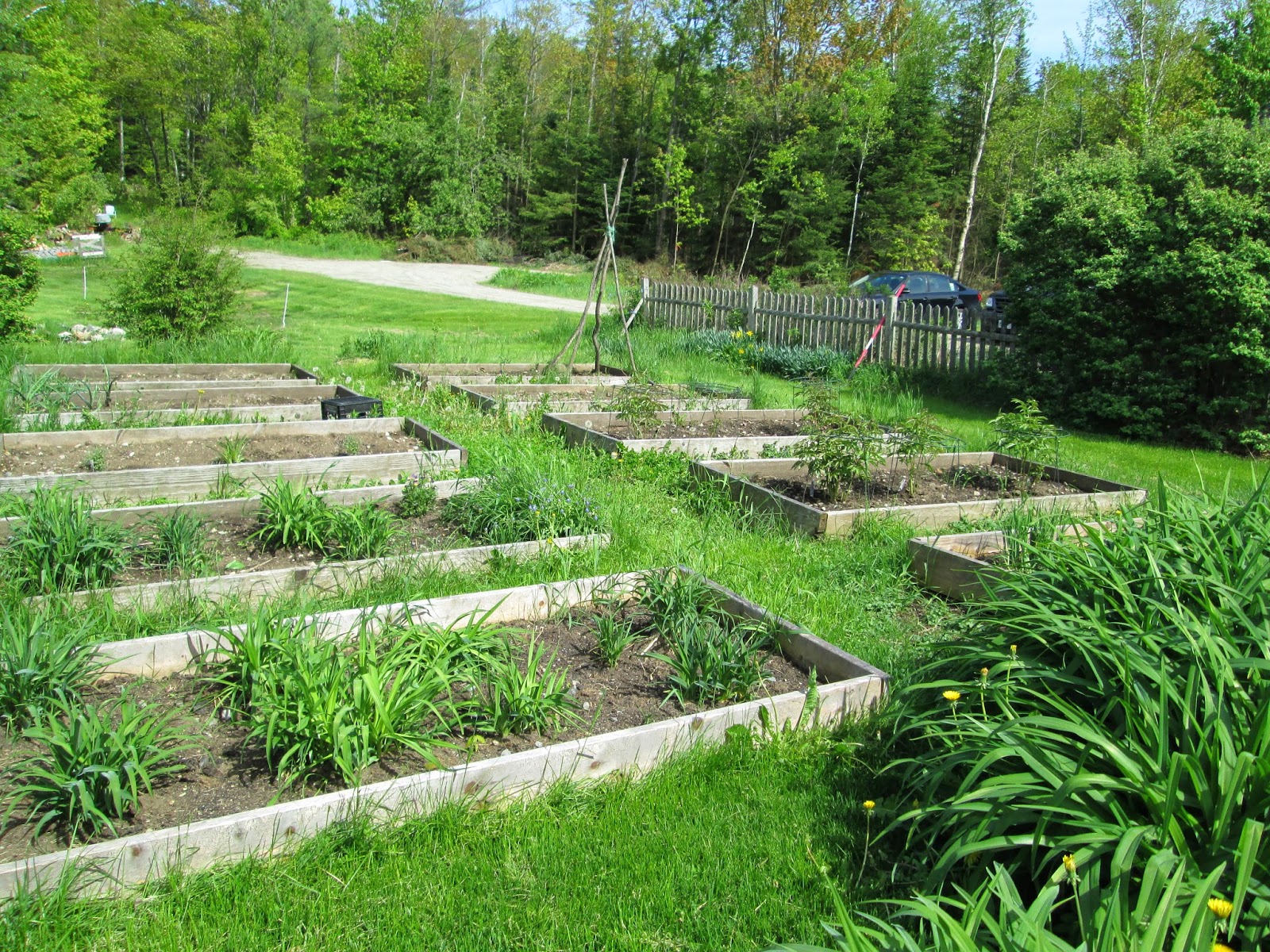 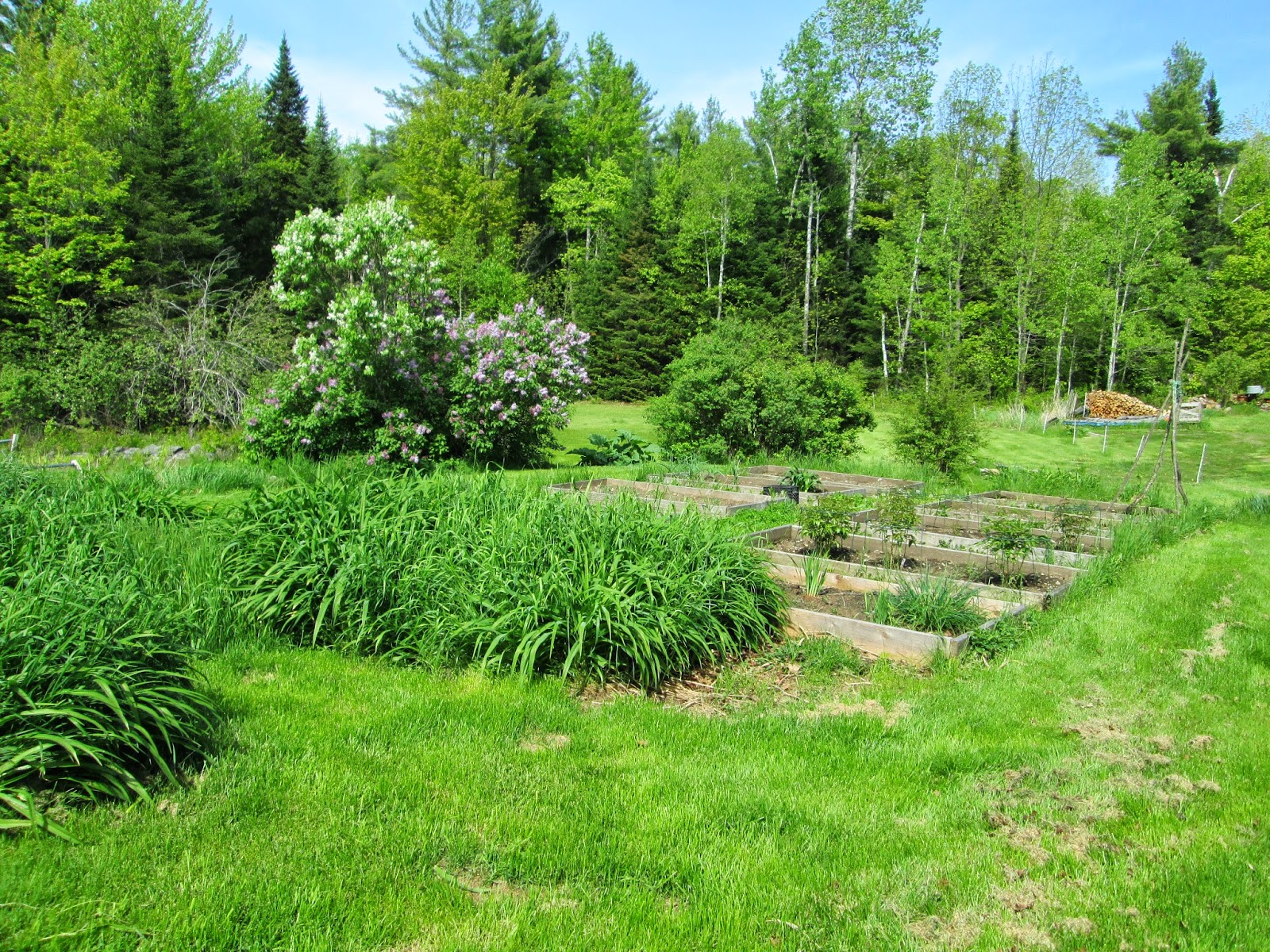 Out back, the lupines and Siberian iris are growing like crazy. Both have spread over the years, and will be a beautiful display before long. 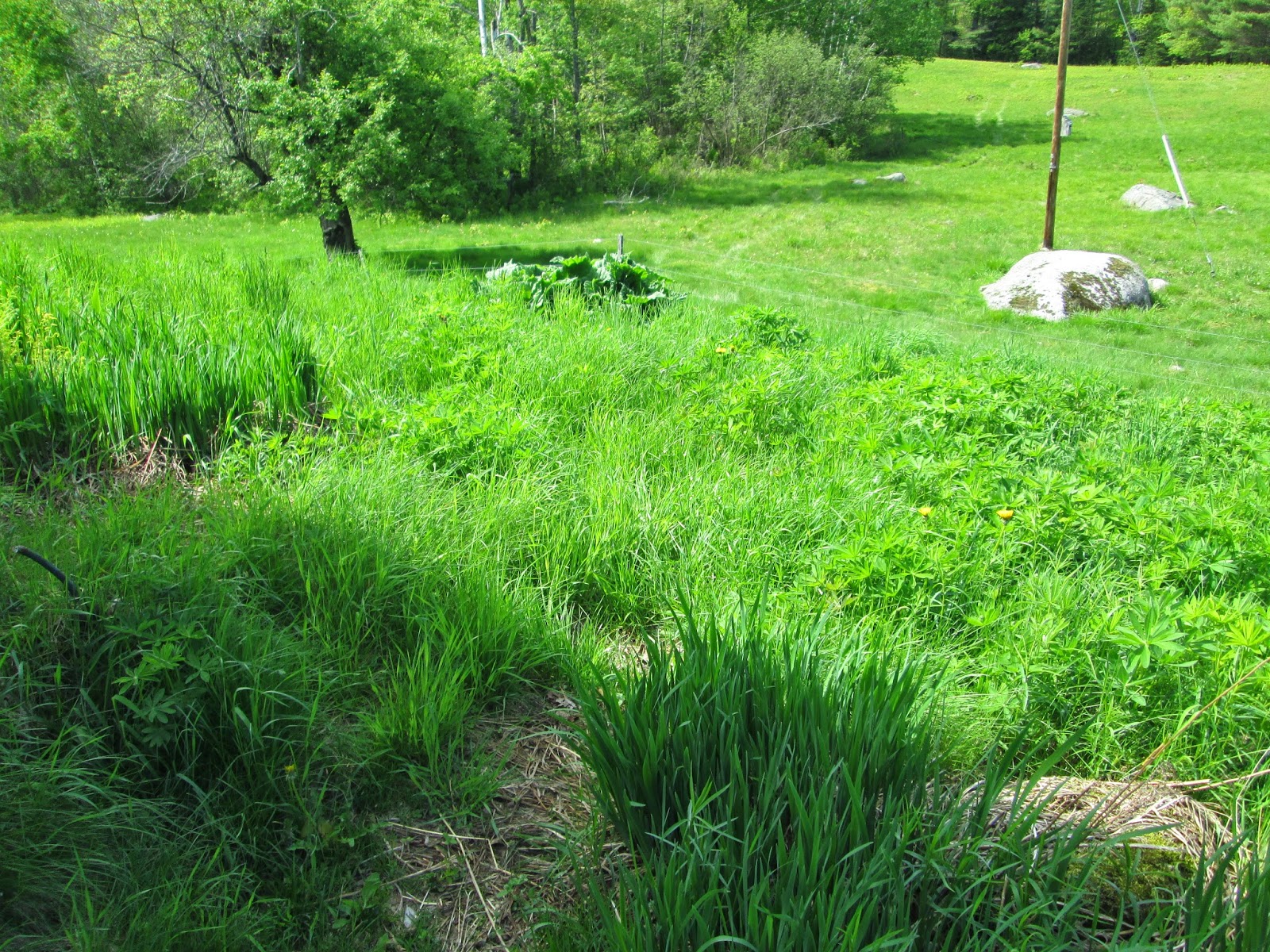