15. The Black Cat Murders - book 2 in the Heathcliff Lennox series
by Karen Baugh Menuhin
mystery 2019
Kindle
finished 3/5/21
16. The Splendid and the Vile
by Erik Larson
nonfiction 2020
print
finished 3/15/21
17. The Curse of Braeburn Castle - book 3 in the Heathcliff Lennox series
by Karen Baugh Menuhin
mystery 2019
Kindle
finished 3/19/21
18. Inked Out - book 2 in the Snug Harbor series
by Karen MacInerney
mystery 2021
Kindle
finished 3/23/21
Still loving the Menuhin books. I'm going to wait a bit to continue, and read some I already own on the Kindle, but I'll go back. Pure delight.
I enjoy two of Karen MacInerney's mystery series - The Gray Whale Inn, and this new one, Snug Harbor which is a bit of a spin-off. These are all books that ease my mind and soul. Nothing terrible happens to the main characters, there are mysteries, the settings are lovely, and always there are recipes.
And now I come to one of the best books I've ever read, The Splendid and the Vile:A Saga of Churchill, Family, and Defiance During the Blitz. It is simply perfect. I've always said Seabiscuit by Laura Hillenbrand is the best book I've ever read, and now this new one by Erik Larson comes in second. He has taken one year, May 1940 through May 1941, and brought it to life. I learned a lot about both the English and the Germans during that time. By choosing to cover only a year, so very much could be covered about the people and life during that time.
I also watched two television series on DVD during my time of reading. One is Goodnight Sweetheart about a man who time travels back and forth between the 1990s and the 1940s. I offered a quote du jour from it in January. It is one of my favorite, favorite television shows.
Back in the early days of PBS, when we were kids in our early twenties, Tom and I watched an English television series called A Family At War (1970-1972). We were absolutely riveted for 52 episodes. I gave the DVD set to Tom when he retired. He hasn't watched yet, but I did this winter into spring (finishing last evening), and found it to be just as wonderful as I remembered. It deals with an extended family from 1938-1945. We went to England in 1971, and I actually looked up the phone number of one of the actresses I liked a lot in the show, Lesley Nunnerley. I've always regretted that I didn't call her and talk to her about what a great performance she gave!
To continue with my World War II reading and television experience, I am now reading Citizens of London:The Americans Who Stood with Britain in Its Darkest, Finest Hour which a friend recommended years ago. And I am going to begin this evening watching four movies, made from 1942-1945, which I bought as a set called David Lean directs Noël Coward.
Posted by Nan 31 comments:

Do you remember the early days of Amazon when they included bookmarks in the book orders? I still have two of them. I have a couple little drawers of special bookmarks and these are among them. 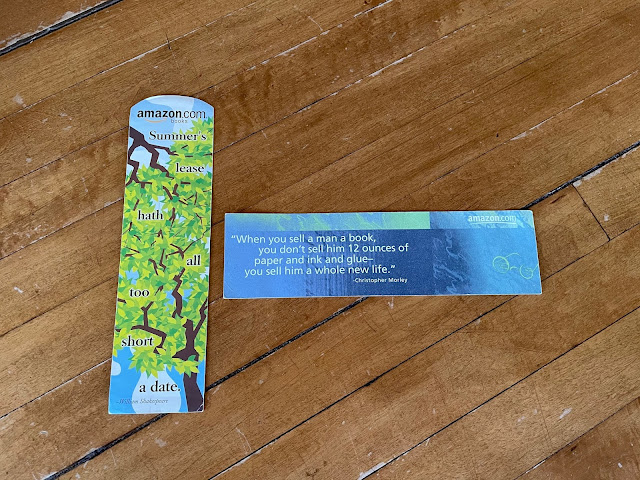 I had to look it up, but our presidential primary was on Tuesday, February 11, 2020. I remember being bowled over when I saw a few people at the voting place with gloves on. I don't think there were masks then. I couldn't believe people were so concerned about a "flu". I didn't think much about it again until March 12. We had been told that an old friend of ours was in hospice. We hadn't seen her for years. We drove over to the place, and were met at the door by someone saying we could not come in. She told us "our president" gave a speech last night that said nursing homes shouldn't let anyone in. Having not heard the speech, we were surprised. She said she would let us know when we could visit our friend, but that call never came. She died on the 29th.

The next day, Friday the 13th, I had a haircut appointment. The woman and I talked about how exciting it was that the local high school boys were in the state playoff that night. By late afternoon it was announced that the game was cancelled. That's when I knew something much more serious was going on. All the schools closed.

I began three new mystery series this month!
10. A Shot in the Dark - book 1 in the Mydworth mysteries
by Matthew Costello (with Neil Richards)
mystery 2019
Kindle
finished 2/6/21
This is a new series set in the late 1920s. I completely enjoyed this story of an aristocratic Englishman, Sir Harry Mortimer and his Bronx-born wife, Kat. They have both been active in government service, and are now home in England. Happily for them, there are enough murders to keep them from getting bored. I like the main characters and I liked this story. I will read more and more of this series.
11. A Pint of Murder - book 1 in the Madoc and Janet Rhys series
by Alisa Craig
mystery 1980
Kindle
finished 2/20/21
This was my first book by Charlotte MacLeod writing as Alisa Craig. It was a very sweet kind of book (if you don't mind a few murders!)in which the reader is introduced to Madoc Rhys, a royal Canadian mountie, and Janet Wadman. I enjoyed it and plan to read the other four books in the series. I've read a very few of MacLeod's books; one in the Peter Shandy series and one in the Kelling/Bittersohn series. I do like her, and am happy to be back in her company.
12. The Old Woman Who Named Things
by Cynthia Rylant
illustrated by Kathryn Brown
children's picture book 1996
print
finished 2/22/21
I recently bought this book. I wrote about a library copy here on the blog. It was written 20 days before Margaret was rushed to the hospital. I wasn't such an old lady then as I feel like now. Hoping when the virus lessens, I will kind of find myself again.
If you go back to read it, and read the comments, you'll see the first one was from Cait O'Connor. Her blog is still up, and the last entry is just so sad. I didn't leave a note, and I'm sorry about that.
13. A Little Night Murder - book 2 in the Mydworth mysteries
by Matthew Costello (with Neil Richards)
mystery 2019
Kindle
finished 2/24/21
I liked this one just as much as the first!
14. Murder at Melrose Court - book 1 in the Heathcliff Lennox series
by Karen Baugh Menuhin
mystery 2018
Kindle

I so enjoyed this book that I've since read the second, and am now on the third. If the author's name sounds familiar, her husband is the son of the late Yehudi Menuhin. She has a website here, and you can sign up for her reader's club which of course I did. In the first email, there is a link to get a short story about the main character, Heathcliff Lennox. He hates his first name. He fought in the First World War, and this is another series set in the 1920s. He has a dog, and soon has a cat as well both of whom he loves. He is quite eccentric, a loner, but pleasant enough to other people. He is a different character than I've read before.

This month I don't have a favorite. I completely enjoyed every book. And I am still reading The Splendid and The Vile. Great, great book. We just gave a copy to a friend for his birthday.

Birthday party, and the evening after

My 73rd birthday was a week ago today, and this is the first chance I've really had to sit down and write about it.

The whole family had not been together since November 1. There was school, there were rising cases in our state, those in authority advised that families not get together for the holidays, and we all decided it was best to stay in our little local pods. Yes, it has been very hard, but the health of all my babies is more important to me than anything! We've all been well, there haven't been cases in their schools, and we're all very careful so we decided we could get together during February vacation. As a birthday surprise, Michael, Estée, Campbell, and Indy showed up down at Margaret's. Tom was down there, and texted me there was a birthday surprise. I walked down and three kids raced to me. What joy!! 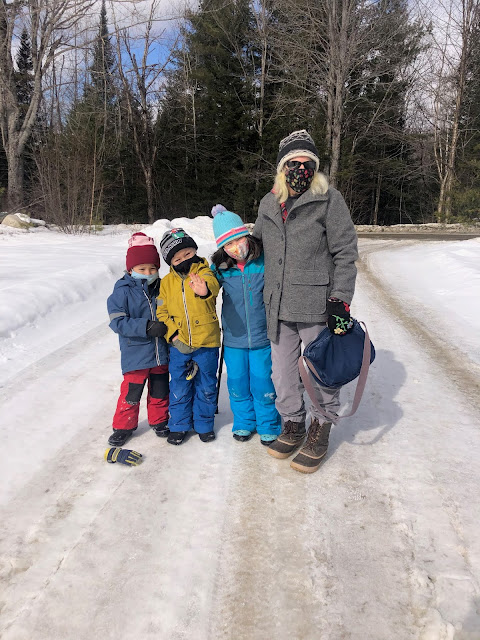 You may notice that my coat is buttoned unevenly. That's because the wind kicked up as I was walking down and I was struggling with one hand, grabbing at random buttons and buttonholes to get my coat buttoned.

At the outside fire 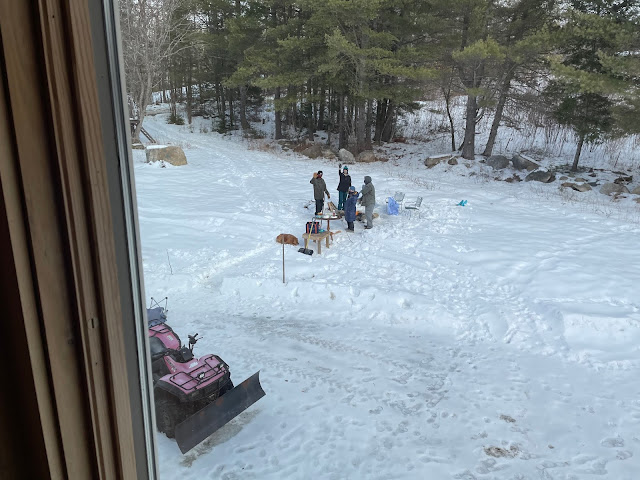 Margaret made the cake. This is the recipe the family pretty much agrees is the best chocolate cake so why make any other! You may find it here. In that big bowl is chocolate whipped cream for the frosting. It was perfect! 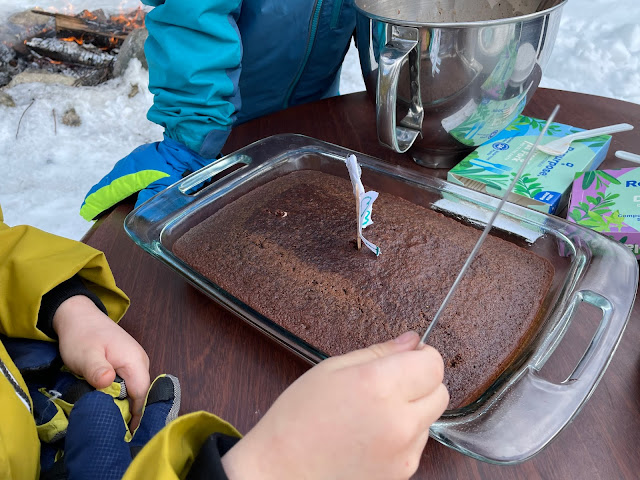 A late Christmas present for Hazel - a dressmaker's kit with a model, material, and all the accoutrements of the sewing world. Estée has a business making clothes and doing repairs/adjustments to older clothes. They worked together for ages. 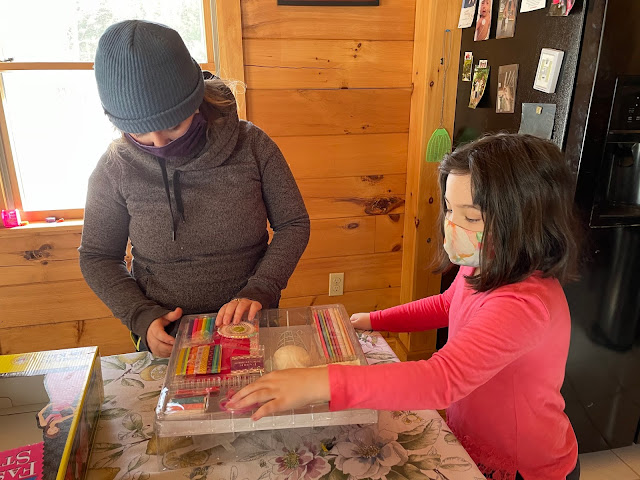 While Margaret taught the boys how to play Mario Monopoly. 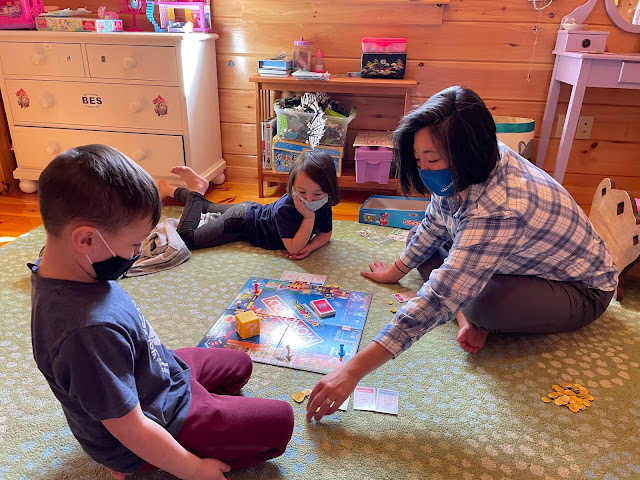 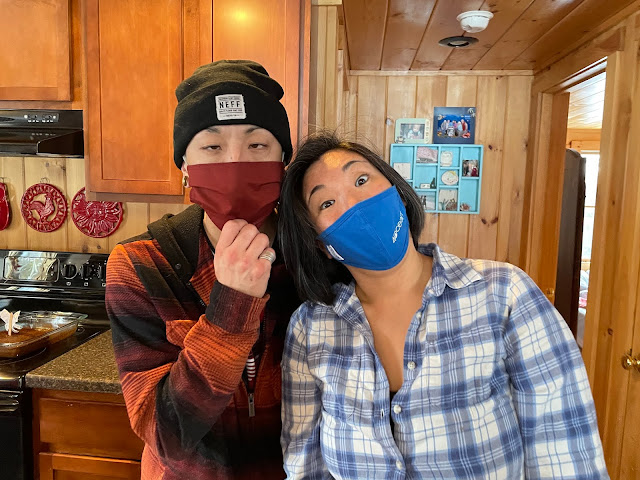 We all agreed it had been the most perfect day, except for missing Matty who had to work.
And then ... when we got home, we saw that Lucy had peed on the kitchen rug. That is not like her. She has never peed anywhere except outdoors. Also, the water bowl was almost empty. We had been noticing for a few days that she seemed to be drinking more than usual. These are both signs of possible medical problems, so off Tom went to the local emergency vets who work the hours the other vets are closed.
There was quite a line of cars when he arrived at five o'clock when they open. Someone came by to get information about what was wrong. He told them, and they came back after an hour and told him he could walk her to the door, and then they took her in. In about half an hour, the vet called and asked some questions. After another half hour or so, the vet called again to say Lucy's sugar levels were elevated. To make a long story short, she has diabetes, and Tom gives her insulin shots twice a day. They gave her a low dose to start her off, and said to go to our regular vet as soon as we could. He said she needed more insulin, so we upped it, and so far she is doing well on it. It has been a fraught few days as we've adjusted to this, but honestly you wouldn't think anything was wrong with our dear girl. 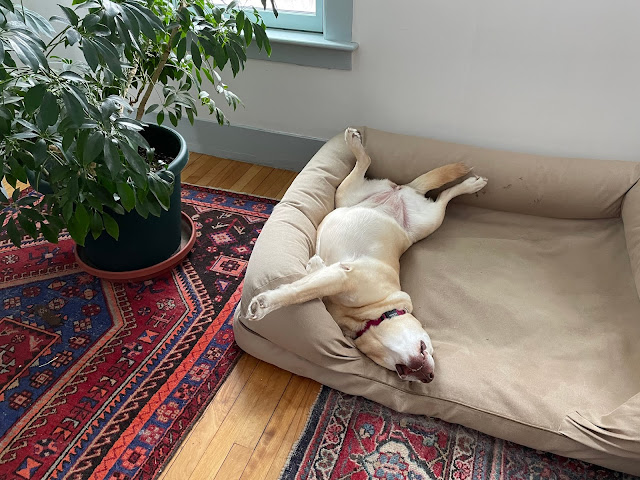 They've told us that she is otherwise very healthy, and should be able to live with this a long time.
Addendum: On Friday Lucy went back to the vet, and he said the insulin had to be upped again because her sugar levels weren't what they should be. (I think that's the medical explanation) He said it can take a while to get this settled. She goes back again Monday morning. So she has gone from 10 units, the base amount the emergency vet gave, to 14, and now to 17.
Posted by Nan 28 comments: