The Old Woman Who Named Things by Cynthia Rylant 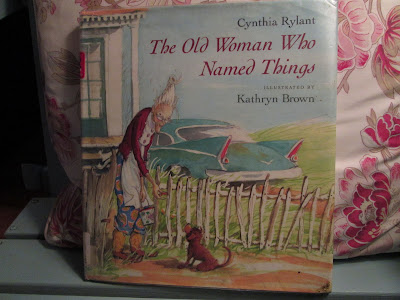 
I 'met' Cynthia Rylant when my children were little. My very favorite is one I wrote about last year, The Children of Christmas. Whenever I read one of her books, I feel an ache, and my eyes fill up, even if a story ends happily. Her people are often on the fringe; the ones the rest of us don't always notice or pay attention to. The old, the homeless, the sad. She captures them. She makes them real to her readers, and I like to think that children gain compassion through the reading of her books. In this one, the woman is quite old. She lives alone, and she has


outlived every single one of her friends. … She didn't like the idea of being a lonely old woman without any friends, without anyone whom she could call by name.

So, she names things, but


only those things she knew she could never outlive.

Her car is Betsy. Her chair is Fred. Her bed is Roxanne. Her house is Franklin.

And then one day, a puppy appears at her gate. She thinks he looks hungry so she gives him a little food, and then tells him to go home. This happens every day. She thinks about the puppy, but doesn't dare to let it stay because

We understand that woman's pain and her fear. After a while, the pup grows up. He still comes each day, until one day he doesn't. She calls the dogcatcher and asks if there is a shy brown dog there, and is told there are many. He asks her,


"Was yours wearing a collar with its name on it?"

When she hangs up the phone, she begins to feel very badly.


Wherever it was, no one would know that it was supposed to come to the old woman's gate every day. … The shy brown dog had no collar and no name, and no one would ever be able to know these things about it.

She proceeds to the dogcatcher's place, and tells him she has 'come to find my dog.' When asked its name


The old woman thought a moment. She thought of all the old, dear friends with names whom she had outlived. She saw their smiling faces and remembered their lovely names, and she thought how lucky she had been to have known these friends. She thought what a lucky old woman she was.
"My dog's name is Lucky," she told the dogcatcher.

We read of their adventures together, and the book ends 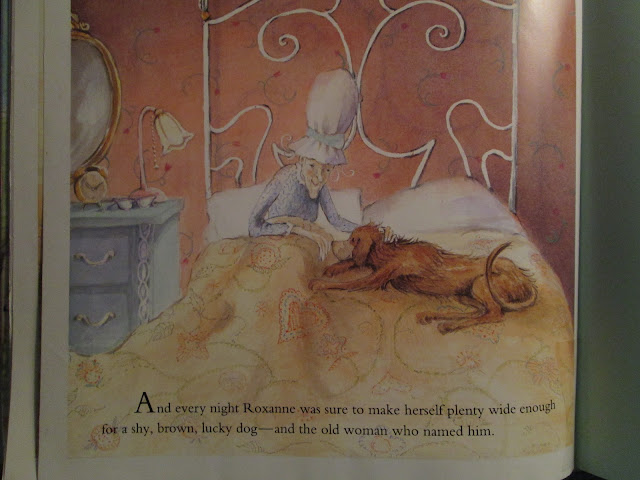 The illustrations by Kathryn Brown really capture the kind of person the 'old woman' is. Look at those cowboy boots! 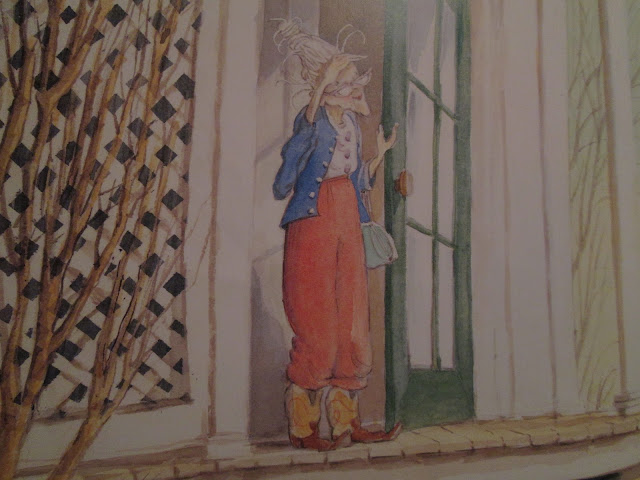 And that wild hair! 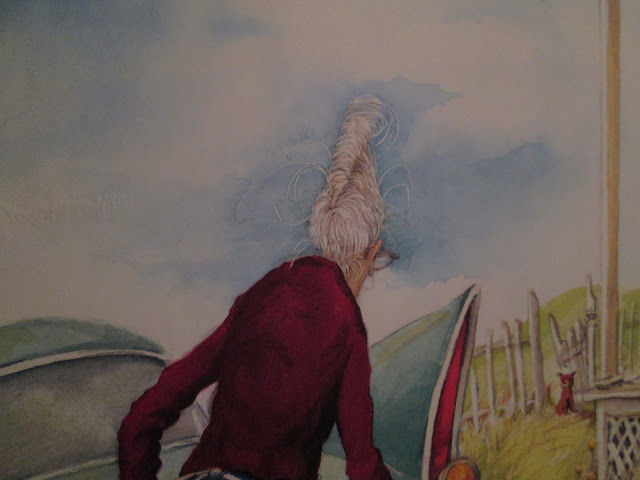 May we all grow old with such spirit, and a good, good dog.
Posted by Nan