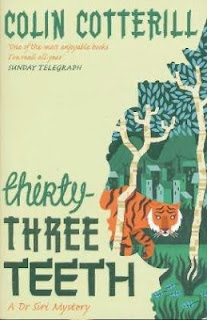 "Thirty-three teeth. It's almost unheard of. The Lord Buddha also had thirty-three … It's a sign, an indication that you've been born as a bridge to the spirit world."
"And you believe all this?" Siri asked as he began to use his tongue to count the teeth in his own mouth.

Isn't this exactly what you would do? I know I did, as I read this passage. (I don't have thirty-three, thank goodness!)

In this second chapter in the life of Siri Paiboun, coroner for the country of Laos in the 1970s, he learns more about who he is, and just why he does have connections with the dead, with the spirits. This mystical connection is a very big part of Siri's life and work. There are kindly spirits, like an old woman who appears eating betel nuts. She doesn't do anything; she is merely there. But then there are the Phibob, really malevolent ghosts who are angry at Siri from the first book. There is a bear on the loose, who is appearently killing people, but which visits Siri while he is in bed, and then just leaves. There's a chest that should not be opened. There are other deaths that Siri must look into.

As in all good series, this second book allows the reader to get to know the main characters better which enriches one's appreciation of the book. There is a tremendously strong sense of the Laotian setting, the weather, and the political climate. I am fascinated by these books, and highly recommend the series. 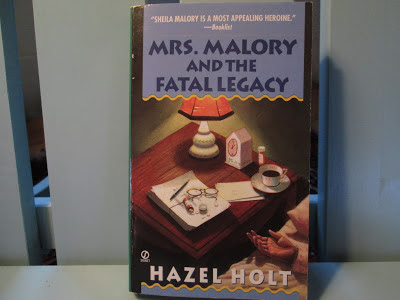 
Have you heard they came up with updated covers for the Mrs. Malory series? I'm hoping that cute cat will draw many new readers to this really exceptional cozy mystery series. Mrs. Malory is smart, educated, an author of books on 19th century writers, a great mother, a good citizen. And she comes upon crimes, through no intention of her own. When I pick up one of these books, I can feel an inner sigh of contentment. I know what I'm going to find, I know that Mrs. M. is unchanging, though events around her do change. I can fully relax. The author isn't going to kill off her son, or have some horror happen to dear Sheila.

Even though Sheila Malory is some years younger than I am, I feel she is a most motherly figure. She works things out so well. She is exceedingly kind to people, and greatly helps them through their problems, all the time being humble and completely free of any self-aggrandizement. This particular book finds her in London after the death of her college friend, a famous writer. She has been appointed the literary executor. As Hazel Holt was the same for Barbara Pym, I expect all those details were, as the British say, 'spot on.' Sheila stays with her cousin Hilda, a delightful character who is brusque and self-contained and who is only beginning to show her softer side in middle-age when she finds herself the owner of a Siamese cat. She and Sheila have very good conversations about the world, both past and present, and they truly enjoy one another's company.

The death of her old friend brings Sheila into contact with the friends they knew in common when they were young. Late in the book one of them perfectly describes Sheila.


"I always said you were bright. You never had the ability to pursue an argument that Beth had, nor her clear, logical mind, but I remember how you used to make these intuitive leaps that landed you where we both were without going through any of the thought processes. I see you're still at it!"

There's an interview with author Hazel Holt, in which she says something so startling, so unusual.


I read virtually no fiction published after 1950.

Perhaps this is the reason her writing is so timeless, so not trendy. This is a marvelous mystery series with intelligent, literate writing. Hazel Holt in in a league of her own. Every time I read a Mrs. Malory book I am so very impressed. I've now read eleven, and when I finish the series, I may go back and read them all again.