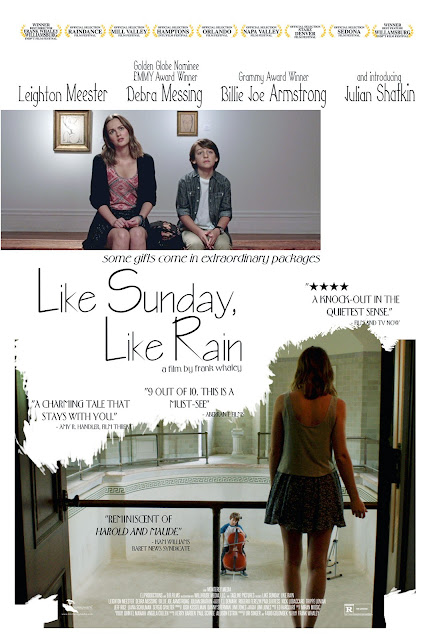 Generally, in life or in the movies, friendships are between peers, often either the same age or at the same stage of life. But this movie, and my own life, proves this isn’t always so. When Tom and I were in our early twenties, we moved into my childhood home after my mother died. There were lots of new people on the street since I had grown up, and these people had children. A month after my mother died, we met a boy out in the field between our houses. He was about to turn nine. Through him we met all the kids on the street. While they were growing up, our house was the place to come and play. It was magic. We all just connected in this amazing, amazing way. And these kids are now in their late forties or fifties, and are still our dear friends.

That’s what Like Sunday, Like Rain is about. A true, probably lifelong, and definitely life-changing, friendship between a twelve-year old boy, Reggie and a twenty-three year old temporary nanny, Eleanor. They talk, they understand one another, they care about one another. This is a wonderful, wonderful movie, and the theme music that runs through it is exquisitely beautiful.

This is a quiet, gentle film. I was captivated by it, and didn’t want it to end. There’s also a little treat for Green Day fans - Billie Joe Armstrong has a small role as Eleanor’s ex-boyfriend. I almost didn’t post the trailer because of the beginning of it. Honestly, that is the only loud part in the whole film. This is not a movie about an aggressive ex. His existence and their breakup is just the catalyst that gets her the nanny job. It is on Netflix Instant, and DVD.

After a year of not planting any vegetables, we are putting in a new, small vegetable garden on the front lawn! I had been sure that we could live without it - that we would go to the local farmers’ markets and also buy fresh produce at our Co-op and so we wouldn’t miss having a garden at all. Well, it didn’t turn out that way. With a new puppy and the dear grandchildren we made it to only one market, where I unhappily paid $4 for a head of lettuce, and didn’t go grocery shopping nearly as often as I meant to. But most of all, we missed walking out the door and picking a tomato whenever we felt like it. We’ve been pondering all winter where to put the new garden. It just needed to be big enough to put in a few tomato plants, lettuce, parsley, basil, spinach, and yellow beans. 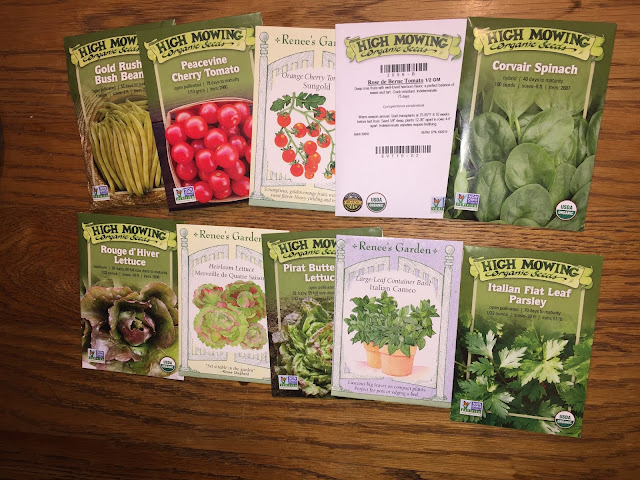 And then, voila! I got an idea, which gives us a garden area and solves a fencing/gate problem we’ve faced for several months. When Tom first began building our new fence in 2014, replacing the falling-down picket we’d had for many years, he put it in the same spot. 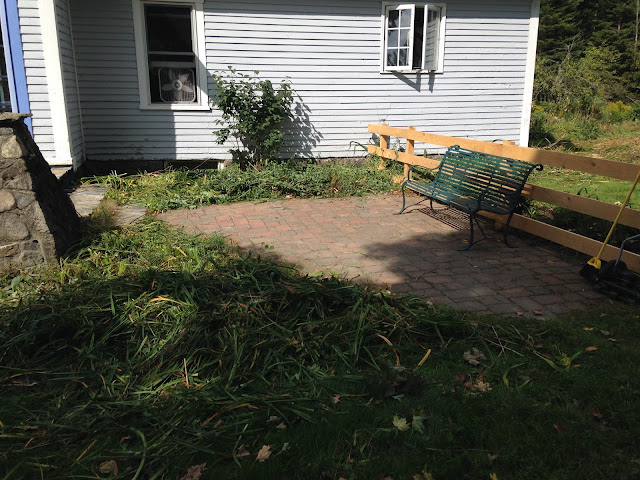 But then we began to think it might be nice to move it over toward the terrace so that any dogs we might have could go out the front door and be completely enclosed. So, he did it. 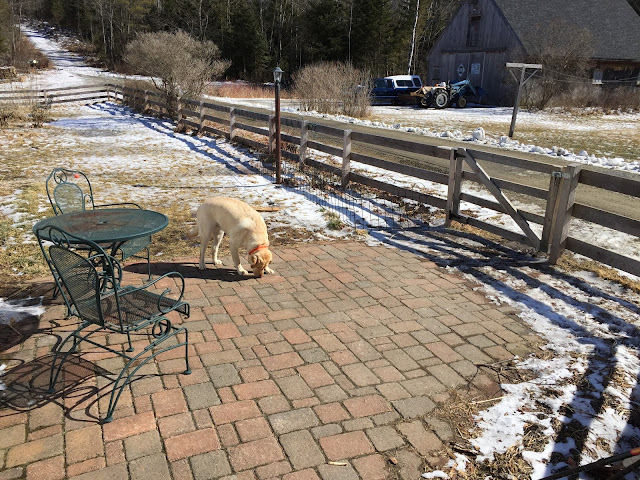 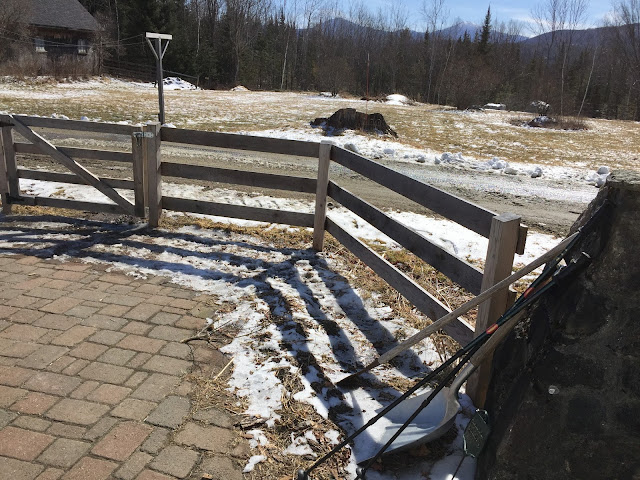 What we didn’t reckon into the equation was the Houdini dog we got last summer by the name of Lucy. She can open latches with ease. Tom tried different ideas to keep the gate shut to no avail until he came up with the idea of a carabiner. 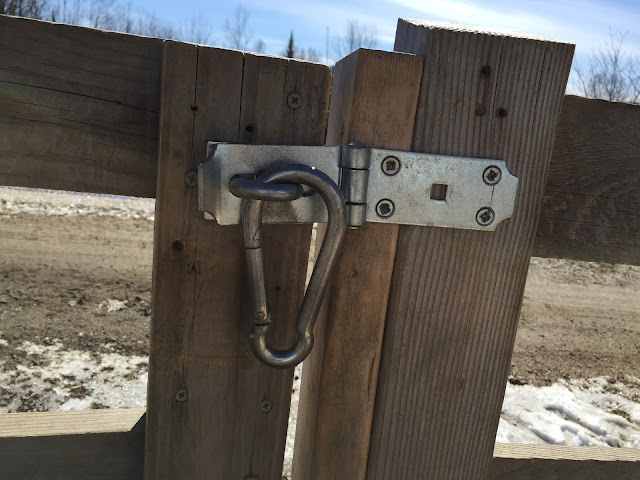 Even Lucy cannot open it. In fact, I can barely open it, and therein lies the problem. It is a real drag to have to go through such a rigamarole just to get in and out of the yard. When Tom is trying to carry in a crate of fresh milk from the local farm, he must put the crate down, open the gate, pick it up, put it down inside the fence, lock the gate, and then go in the house. And the poor UPS and Fed Ex fellows have braved the carabiner with nary a complaint. We try to meet them so they don’t have to come in but sometimes we aren’t home.

The hassle of opening the gate was one problem. The other problem with Lucy in that part of the yard was that she was ruining my precious flower gardens that border the patio. This corner is where she stands to do her major job around here - that of being snoop dog. 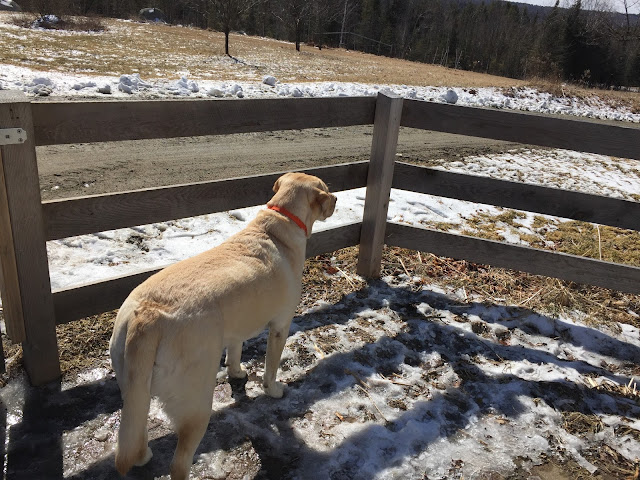 Margaret, Matthew, and Hazel live just down the road, and she is worse than any neighbor peeking out through curtains or using a telescope. She watches for them. She gets all excited when they drive in their yard, or she hears their voices or their dogs barking. And of course tramples the flowers in the process. I ended up fencing them, but felt badly for her because she so enjoys her ‘work.’ I thought we’d just transplant the whole bed in the spring. But now I won’t have to. With our new plan, I get my garden back.

So, we are returning to the old way. Lucy will go out the kitchen door and have the freedom of most of the yard (which opens into a big field) and we will have the freedom of coming and going in the front door with no hindrances. The new garden will be right beside the patio. There will be a section of fence dividing it from the rest of the yard. It’s going to be wonderful, and we are so excited. I’ll post pictures as we move along on the project.
Posted by Nan 32 comments: 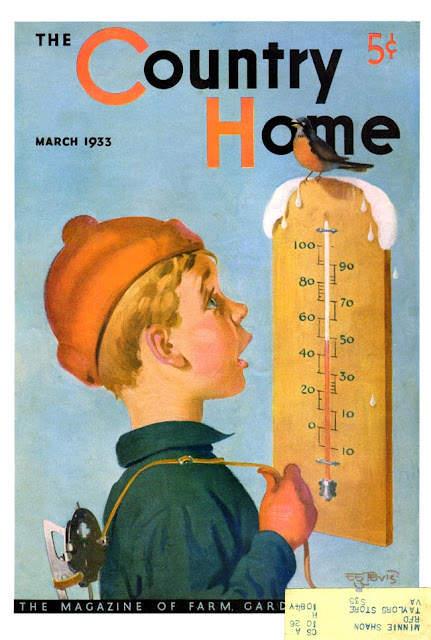 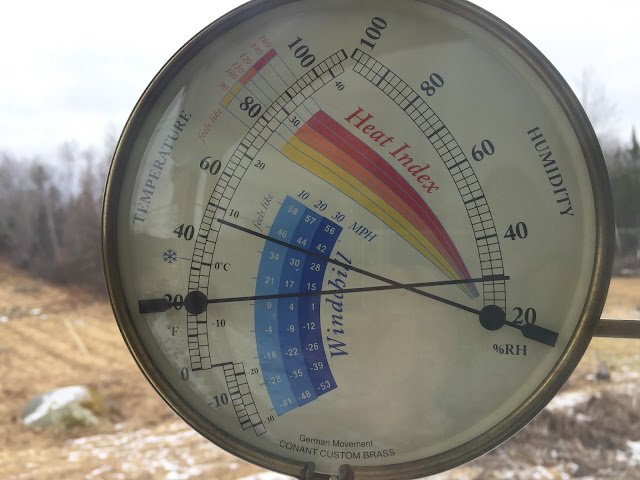 I was so pleased when I read Heroic Measures and it didn’t feature the older people or the dog dying. Those kinds of events seem to be standard fare in books and movies. It is much, much harder to write a book or make a movie about real, everyday people living mostly happy lives. Of course that isn’t necessarily the truth of life, but it is certainly a truth. There are a whole lot of happy, good people out there. They have their troubles and cares but they also have great joys, and I, for one, like to read about them in books or see them at the movies.

I began watching The Intern with no previous knowledge. I knew who the main actors were and that’s it. Robert De Niro and Anne Hathaway. 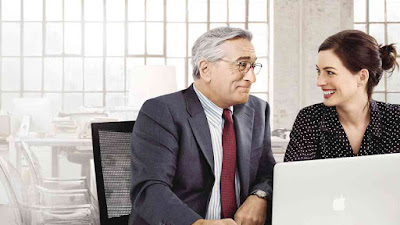 And I knew it was a Nancy Meyers movie. 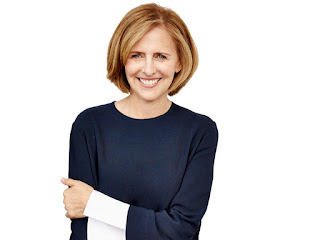 I love The Holiday, Something’s Gotta Give, The Parent Trap (the remake), and Father of the Bride (remake). I like her view of the world, and had high hopes that I’d like this one, too. And oh, how I did. I loved it. And Tom felt the same way. Here is how she describes her work:

Nancy Meyers knows who she is and who she isn’t.
What she isn’t is a filmmaker known for high-concept, ambitious stories or action sequences and stunts.
What she is, is a producer, writer and director known for “Something’s Gotta Give,” ”The Holiday” and “It’s Complicated” who creates well-developed characters having relationships that unfold on screen.
“You don’t come to my films for that amazing plot twist,” she said in a recent interview. “I’m not trying to put myself down but the plot isn’t sort of what stirs it all up. “
She says characters are “Where I put my energy. I want to make them people you care about. I just want to make them people you care about so you get invested as you tell the story. You’re in with me.”

Robert De Niro is a widower who misses having a purpose in his life. Even though he has money and friends he feels there is a space that needs filling. He sees an ad for a senior intern, and applies for the job. And the movie goes on from there.

There aren’t the expected stereotypes. First of all the different generations in the company get along well together. Younger people listen to the older man. The young people are not superficial and vacuous. Every person in the movie seemed real to me. There were surprises all through the movie. I’d think, ‘well, I didn’t expect that.’ Good surprises. Small surprises. No one is perfect, no one can hold it all together all of the time - just like real life. And there's a delightful heist scene! 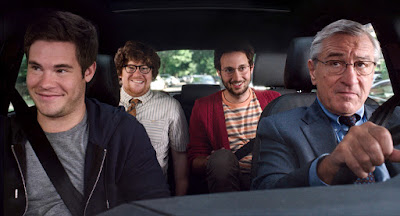 I will add this spoiler, as I did with Heroic Measures, there’s a happy ending. The old fellow doesn’t get sick and die, and in fact, has a romance! The young people work on their problems.

This is a movie with much kindness and compassion and intelligence. One of the very best I’ve ever seen.
Posted by Nan 32 comments: