A different way of gardening

"If you want to attract wildlife into your garden, and increasingly most of us do, the key thing is you've to abandon trying to control every aspect of your garden and that will allow wildlife in."
Monty Don on Gardeners' World.
This is a quote from a recent show, but he has been talking about this subject for years now. And we have followed his example.
I expect most men just love to mow. I know that Tom always did. But he has had a sea change in his view. He no longer mows any of the lawns every week. In England this past May was "no mow May". At Windy Poplars Farm, it might be called "mow once in a while in May, June, July, August". And you should see the results. Both red and white clover, little white flowers I don't even know the name of, daisies, hawkweed, dandelions, Achillea/yarrow have all grown and prospered. We have seen bees and other bugs on them. When Tom does mow he leaves whatever is still in bloom. Along the edge of one garden a whole row of achillea grew; a real row - as if we had planted it.
Another benefit is that when it is dry, as it was here early in the summer, the grass stays much greener.
We shake our heads in pure delight at this change in our yard. The big fields are mowed only once a year at the end of the summer. When we had more animals we used to bring them into the other fields, but with only 8 sheep and a donkey, the barn pasture is plenty so we let those other pastures become fields loaded with all kinds of plants. Along our road/driveway are tansy, goldenrod, meadowsweet, brown-eyed Susan, buttercups.
It is a veritable garden of Eden here now. In addition to all these wildflowers, a couple years ago we planted echinacea, monarda, perennial hollyhocks, and achillea milleflora in the terrace garden, and the butterflies and bees are plentiful. I left the flowers on the catnip plant and it is full of bees every day. There is a wild garden off the side yard where there are lupines and comfrey and globe thistle, and loads of milkweed.
"Wildlife" has quite a different meaning to the people on Gardeners' World and people who live where we live in northern New England. It is not the bees and butterflies and other flying pollinators. Our wildlife is deer and coyotes and black bears. We've had them all visiting this spring and summer. The coyote only once. It was the biggest one I've ever seen. It was just looking into the pasture. I opened the door and said it should probably leave now, and it did. A mother and her two fawns come and eat from the garden most evenings, and they haven't done much harm. I don't begrudge them anything really because I am happy they come by. We also had a young bear early in the season. Just saw one the other evening and wondered if it is the same one, only bigger. There have been birds nesting, and the wild turkeys with their chicks.
Possibly (probably) because of climate change, we've seen tomato plants pop up all over the garden from last year's tomatoes. Also potato plants and, just like last year, the calendulas have returned. Mallow has come back in grand fashion after being away for a few years, and the hollyhock in the patio garden appeared.
The gardens and animals have been such a source of comfort and deep joy during this kinda still in the pandemic time, and also some family situations that have taken up a lot of time and emotion. Very, very thankful. I wanted to put up pictures today, but just didn't have the time. I'll try and do that soon.
Posted by Nan 28 comments:

Two months after my mother died, the new Rolling Stone Magazine must have had a piece on Mick Jagger turning 30. I don't recall the article, but I do remember saying to Tom, "as long as Mick Jagger is in the world, I'll never feel old." I even know the room I was in when I said it. I was 25.
Well, today he is 78 and I am still five years younger than him, and really, I feel the same way. He is a wild man, with more energy than any ten men of 30 or 78!
Instead of putting up a video of the Stones, I thought I'd share one of my favorite songs - a duet between the late, lamented Peter Tosh and Mick Jagger.
Posted by Nan 8 comments:

Independence Day plus one 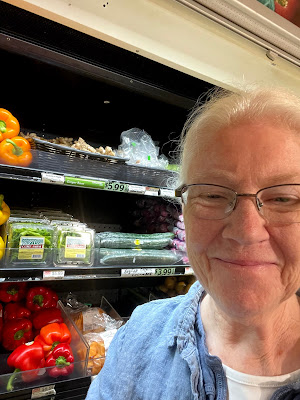 Here I am at my local Co-op today without a mask! This is the first time in 15 months! I was so much more relaxed today. It was an amazing feeling to just "be" again without impedimenta. The new "rule" is that if you are vaccinated, you don't have to wear a mask. I saw many people still wearing them, but it was Senior Day (which happens once a month when those over 65 get 10% off) and perhaps older people may have medical conditions or live with someone who does and they do not want to take a chance. Some of the store people wore them and others didn't. 75% of the employees have been vaccinated so maybe those were the ones who haven't had the shot yet.  Anyhow, it was just the best feeling!
Posted by Nan 14 comments:

I wrote about our trip to Paris after the fire at Notre-Dame, and today I am revisiting that trip on the 50th anniversary of Jim Morrison's death. First of all, there is no way my head can get around the fact of all those years. From 23 to 73 in a blink of my eye. How is that even possible?
Anyhow, when we were in Paris, we visited Pere Lachaise cemetery. I don't think we went because of anyone special who was buried there. We had heard about it, and spent a day walking through. It is truly beautiful.
Fast forward to weeks later. We were in Dublin on a bus, and saw a newstand out the window. There was a copy of Rolling Stone and Jim Morrison was on the cover. We were so excited to buy it. When we actually saw it, our happiness quickly went away. That beautiful boy, dead. Even now I can't believe it. This is my copy of the magazine. Not sure if it is the one we saw in Ireland. 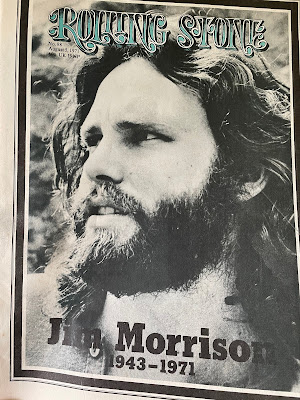 And it was so strange to know we had been at the cemetery after he had been buried there. Just the idea that we could have seen his grave without knowing he had died. Gives me shivers.
So, in honor of the 50th anniversary of his death, I thought I'd post a song. It was hard to choose just which one, but here you go.
The Crystal Ship
Before you slip into unconsciousness
I'd like to have another kiss
Another flashing chance at bliss
Another kiss, another kiss
The days are bright and filled with pain
Enclose me in your gentle rain
The time you ran was too insane
We'll meet again, we'll meet again
Oh tell me where your freedom lies
The streets are fields that never die
Deliver me from reasons why
You'd rather cry, I'd rather fly
The crystal ship is being filled
A thousand girls, a thousand thrills
A million ways to spend your time
When we get back, I'll drop a line
I read someone's analysis of the song, and you may read it here. All it showed me is that one cannot really analyze poetry! It is what it is to whomever is reading it.
Posted by Nan 8 comments:

If you are reading this, you will see that my blog header picture is all messed up. I can't say I wasn't warned because Kay at the Musings blog posted about her problem a couple days ago.

So many of my fellow bloggers have complained about the changes blogger made months ago. I have had no trouble at all, except that I could no longer post a home video.

We got a new computer last month, our first one in ten years, and now I can post a home video. Hooray. But there have been so many changes that Tom has spent days on the phone with tech people.

I am wondering if it is the new technology that has caused me to have this problem with my blog header. Or is it blogger? Anyhow, it sure doesn't look pretty. The header picture was peonies but they have gone by and the hollyhocks are stars in the garden now so I thought they would make a good header photo. I knew I was taking a chance, but I thought because I hadn't had the troubles others had that I'd be okay. Nope.

As I told Kay in a comment, there are days I want to give it all up. No more computers or cell phones. Sometimes I want to live a life that is free of screens and connections. I am driven wild with this whole cloud thing. We didn't have any cloud with the old computer, but now the Apple hard drives are small and there isn't room for thousands of photos. I feel like we are all forced to join the crowd. This is all so different from the whole ethos of the hippie life, which was to do things for yourself, and live a private life if you wanted to. Now I feel like there is no freedom like that. No privacy. No quiet.

We are wooed by convenience and ease. The words from Pink Floyd come into my head, "comfortably numb".