I read 10 fiction books this year.

The first I read was The Swiss Summer which I wrote a bit about here. I am currently reading a second book by Stella Gibbons, and am just as happy with it. Thanks again to the Dean Street Press for publishing these wonderful works by women whom most of us have not heard of. I also read three by Molly Clavering. You may read about her here.

I read three works of Japanese literature that I thought so original, so different from anything I have read before.

I thought The Bishop's Wife by Robert Nathan to be quite odd, not anywhere near as good as the movie!

I wrote about the Boy... by Charlie Mackesy here. Not impressed.

Only 3 non-fiction but all of them were utter gems! The Splendid and The Vile, Citizens of London, and A Child's Christmas in Wales.

8 children's books. Most were so-so but Cynthia Rylant's The Old Woman Who Named Things and The Railway Children by Edith Nesbitt were wonderful.

1 mystery thriller still scares me to think of it.

1 book of poetry - A Shropshire Lad by A.E. Housman. I was sure I would love it, but I didn't. I loved some lines but was not interested in much of it.

Finished the Harriette Ashbook series that I raved about last year.

Read two more E.C.R. Lorac books. Not sure if I have read all the ones available, but will check.
Read the latest in the Lady Hardcastle series by T.E. Kinsey. I see there will be a new one next year.
Read the first two in the Mydworth series by Matthew Costello and Neil Richards, and really enjoyed them! I want to read more this year. I claim to not like "historical" mysteries or fiction but yet I seem to read and like a lot of it!
Another new series I like is the Heathcliff Lennox series by Karen Baugh Menuhin. And yes, you are right in wondering if she is related to Yehudi Menuhin. Her husband is his son. The author has a great website here.
I do like the Inspector Knollis books by Francis Vivian from the 1940s and 50s. In both this series and the mysteries by the Radfords, E. and M.A., there isn't personal information. The detectives just get on with solving cases and they are brilliant at it. No family life, no feelings - just the facts which can be very soothing! Another old book is by Christopher Bush, The Plumley Inheritance, first book in the Ludovic Travers series. This has been out of print for ages and is published by the wonderful, wonderful Dean Street Press. There are a whole lot more available!
For some reason I haven't been able to figure out, I never watched the Grantchester series on PBS. When I heard the new season was coming up, I had my own little TV marathon, and watched them all. Years ago, I read the first two books in James Runcie's series. My little reports on them are here. Since it had been (gulp) seven years, I decided to read them again and then continue with the others. There was a treat in that he wrote a prequel published in 2019, so I read it first and then the rest of the books. I was in reading heaven within the pages of these books. If you have only read the books or watched the television version, they are very, very different. Both are extremely enjoyable but not the same.
And to end my year in mysteries, I read the latest entries in Karen MacInnery's Snug Harbor series; Harriet Steel's Inspector de Silva series; and Jacqueline Winspear's Maisie Dobbs series. I have written about the Whitstable Pearl series by Julie Wassmer. I just love them. Jack Murray's Kit Aston series (another historical mystery) is very appealing. I read the first and have more ahead of me. Last but definitely not least, are three books in the Devonshire series by Michael Campling with a different and interesting pair of amateur sleuths.
Posted by Nan 6 comments:

How do you feel?  The Old Woman Who Named Things

Describe where you currently live:  On -  A High Wire in Nuala

If you could go anywhere, where would you go?  A Child's Christmas in Wales

Your favorite form of transportation:  The Boy, the Mole, the Fox and the Horse - the last named

Your best friend is: Dear Hugo
You and your friends are: The Railway Children
What's the weather like?  The Splendid and the Vile
You fear: the Valley of Lies
What is the best advice you have to give?  "Murder Isn't Cricket"
Thought for the day:  Sidney Chambers and the Persistence of Love
How would I like to die?  Sidney Chambers and the Shadow of Death (23rd Psalm)
My soul's present condition:  (and again) A High Wire in Nuala
Posted by Nan 12 comments:

I want to thank my most loyal and kind readers. I love it that you are always there even when I rarely do a blog post. I am so hoping for, as The Kinks say, better things in the coming year. So here is our 2021 Christmas card for you. It may not have come through the mail but it is just as heartfelt. 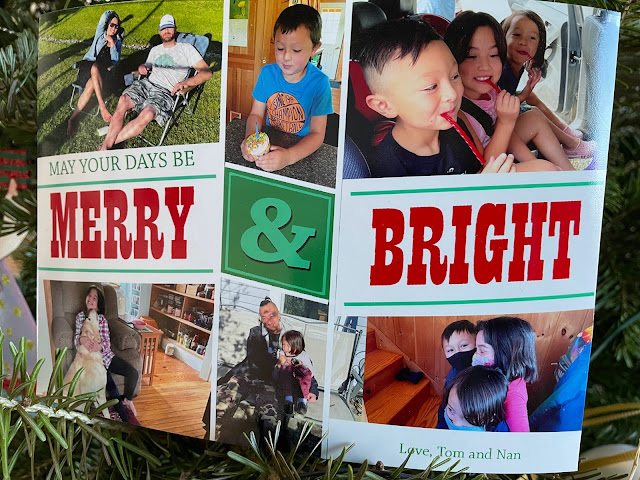 Setting up the crèche 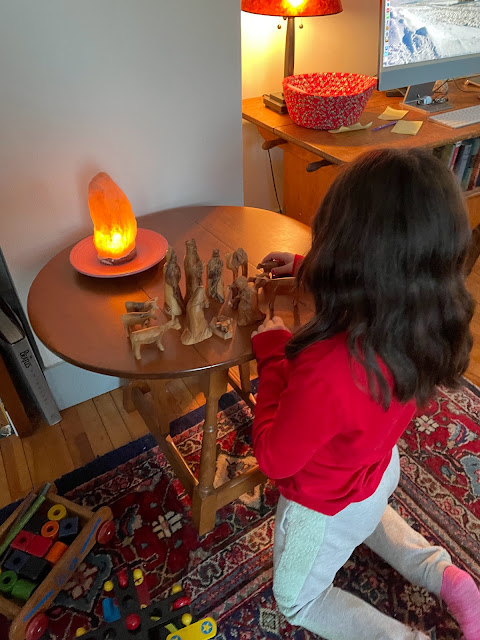 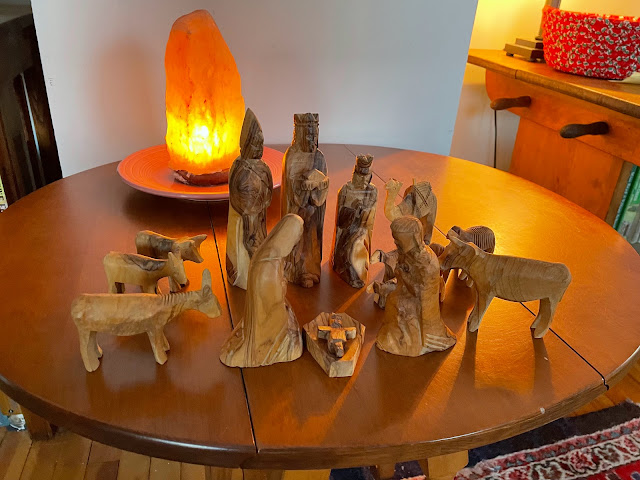 1984. Look at all those young faces! There is a list of the performers here.
Posted by Nan 13 comments:

A little Amy Grant for your Christmastime listening pleasure.
Posted by Nan 10 comments:

A Child's Christmas in Wales by Dylan Thomas 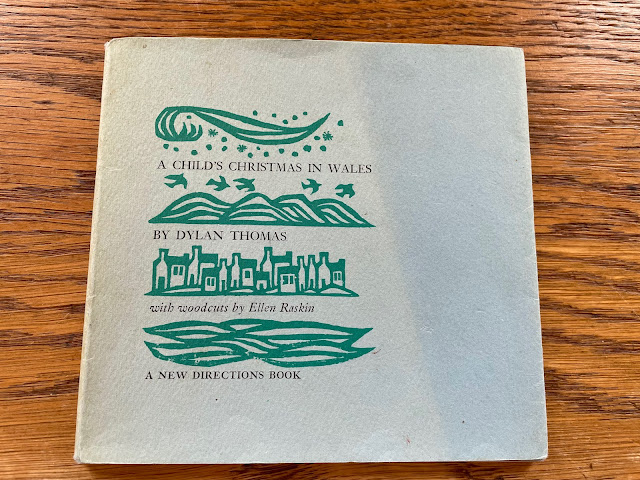 Each year I bring out this dear little book with all the other Christmas books. I don't think I have ever read it in its entirety until now. Most people seem to catagorize it as "prose poetry". Whatever it is called, I loved it so much, and I find myself admiring the film version even more because it is very true to Thomas' words. I've written about the movie here, if you would like to read it.

I had forgotten that I gave it to my mother. 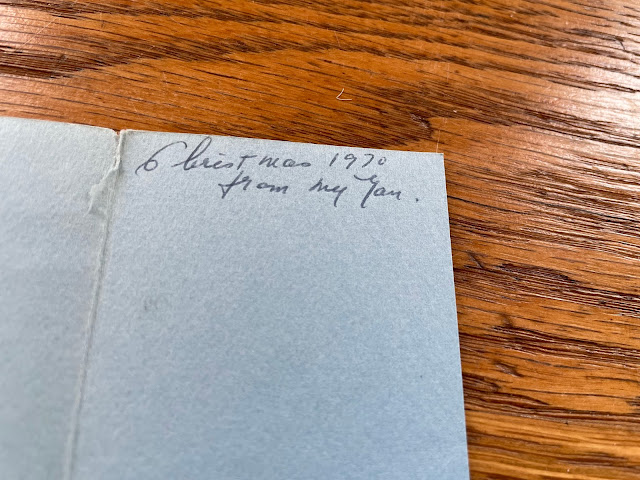 It clutches at my heart and makes me cry - the way she wrote "my Nan". She died three years later.

Two years earlier, Tom had given her this album on the first Christmas after my father died. 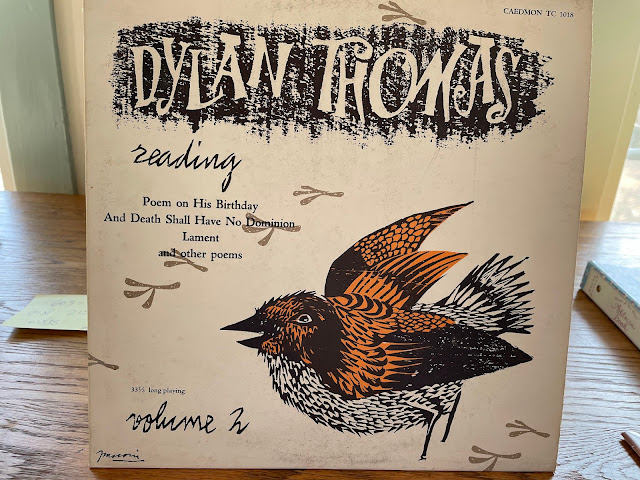 I heard her play "And Death Shall Have No Dominion" a lot, and I think it was a comfort to her. There's a line "Though Lovers Be Lost, Love Shall Not". Deep fellow that Mr. Thomas.
And that depth comes through in "A Child's Christmas in Wales". His words convey so much feeling. He writes of "the distant speaking of the voices I sometimes hear a moment before sleep". Do we all hear those voices?  Of our long-dead parents or grandparents? And we never can remember because we fall into sleep right afterward?
The heartfelt parts are balanced by the humorous remembrances like Miss Protheroe asking firemen who have been fighting a fire in the house, "Would you like anything to read?"
Thomas offers litanies of "useful presents" - "engulfing mufflers of the old coach days, and mittens made for giant sloths" and "useless presents" - "bags of moist and many-colored jelly babies" and "a tram-conductor's cap and machine that punched tickets". "And a packet of cigarettes: you put one in your mouth and you stood at the corner of the street and you waited for hours, in vain, for an old lady to scold you for smoking a cigarette, and then with a smirk you ate it."
After an adventure outdoors with friends, they "returned home through the poor streets where only a few children fumbled with bare red fingers in the wheel-rutted snow and cat-called after us..."
If you type his name into the blog's search, you will find more by Dylan Thomas, including the words that end both this book and the movie;
"Looking through my bedroom window, out into
the moonlight and the unending smoke-colored snow,
I could see the lights in the windows
of all the other houses on our hill and hear
the music rising from them up the long, steadily
falling night. I turned the gas down, I got
into bed. I said some words to the close and
holy darkness, and then I slept."