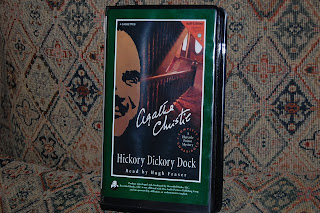 I really enjoyed Hickory Dickory Dock, my fifth book in the Anything Agatha Challenge, and my first Poirot mystery. In this case, his most efficient secretary, Miss Lemon, makes some errors in her typing, and Poirot knows this means something is terribly wrong. She proceeds to tell him that her sister, Mrs. Hubbard is very upset. The latter works at a youth hostel, and recently a number of small items have gone missing, and some acts of malicious mischief have taken place. Hercule Poirot goes to the house, on Hickory Street, as a supposed lecturer while he really studies the situation. Are these actions the work of one person? If not, then are they related somehow? And what is really going on in this place? The residents are mostly international students, though a few are employed. There were a lot of characters, and if this had been a print version I might have gone back to check on just who was whom, but mostly I did alright. The solution to the mysteries was presented in a clear, understandable manner, and was surprising to me in some of its elements. The book was very well written, and I really see why Agatha Christie is so very esteemed in the literary world. We've just begun watching the televised versions of Poirot from Netflix, and are completely absorbed in them. I never would have watched them were it not for this challenge, and I am so grateful to have him in both my reading and watching life. He is a wonderful, eccentric fellow with not a few Monk-ish characteristics. David Suchet portrays him perfectly. One of the treats of this audio version is that it is narrated by Hugh Fraser, the man who plays the part of Hercule Poirot's great friend, Arthur Hastings. I am delighted to have all these Poirots ahead of me. They are pure pleasure.
Posted by Nan