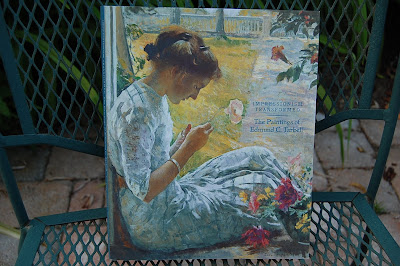 Over the years, I've bought books at places I've visited, filled with my enthusiasm about what I've seen while there. Yet those books languish on my shelves. I pick them up occasionally but don't sit down and really read them. Now I'm changing that pattern. I visited The Currier Museum in April, and was so taken with Edmund C. Tarbell's work that I bought this book. As I began reading it, really reading it, not just turning pages looking at the paintings, I realized why I like this artist so much: he focuses on family and domestic scenes, as does another painter whose work I adore, Carl Larsson. I'm no scholar when it comes to art, but I like what I like, and that's what I'm drawn to. I like family life, rural life, and work that really looks like what it is representing. Of all the visual arts, I like photography the best; as long as it isn't messed with. I like the real thing, the true view, just as I do in painting. A few excerpts from the book describe what his work is all about.

Tarbell guided Boston artists away from a generic, Americanized Impressionism toward a new manner of painting easily recognized by its serious exploration of subtle light effects, by the sober elegance of its motifs, and by the care and craftsmanship with which it was made. Painters of the school were interested in realism, but not in the social realism preferred by contemporary New York artists ... They sought instead to "make it like," a credo repeated over and over again among the group.

Tarbell's boldest stylistic experiments took place in the realm of plein-air [in the manner of a 19th-century style of painting outdoors, or with a strong sense of the open air] painting. Taking his family as his subject, he represented the world of personal experience in vivid colors and lively brushwork.

The Boston painter further distinguished himself from his radical European predecessors in his focus on the healthful versus degenerate aspects of society. Collectors and critics alike embraced Tarbell's plein-air figure painting, which seemed to exemplify the best aspects of modern American life.

Though Tarbell lived and worked in the Boston area, and other places, the heart of the family's life was in New Castle, New Hampshire, where they had a wonderful summer home on the seacoast, which, I believe, is still owned by the family.

You may have noticed in the past weeks a painting of his on my sidebar, which is also the cover of this book. It is his daughter, Mercie.

I took a few photos of paintings in the book to give you an idea of his art. 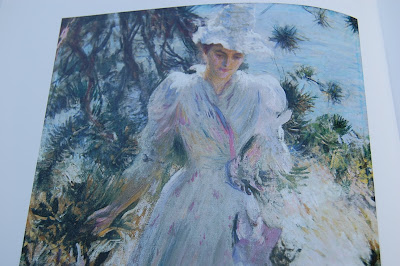 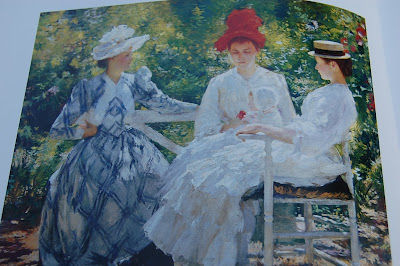 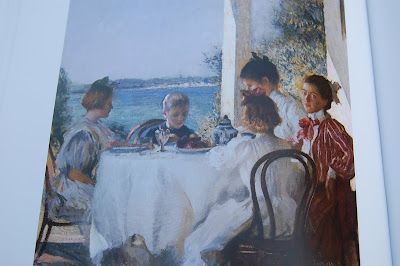 The book does an excellent job of telling the reader about Tarbell, his family, and the art community during his lifetime. It offers many, many paintings from all the years he painted. Works by other artists of the time are shown to compare and contrast with Tarbell, and help explain his style. He seems to have been a truly happy man and that joy comes through in his work.

If you would like to buy the book, it is available through the Currier's online store. I loved it.
Posted by Nan