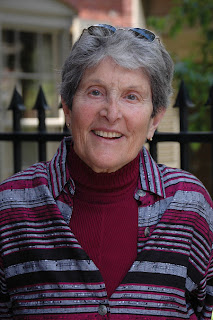 Wm went into the wood to alter his poems
writes Dorothy. I shelled peas, gathered beans,
and worked in the garden. This is Grasmere

where she picked and boiled gooseberries,
two lbs. of sugar in the first panfull
while Wm went into the wood to alter his poems

a trip he makes almost daily, composing
the lines she will later copy. Mornings
she works in the garden at Grasmere

which looked so beautiful my heart
almost melted away, she confides
while Wm's in the wood altering his poems.

On one of their daily walks she observes
helpful details of Wm's famed daffodils.
Then it's back to the garden at Grasmere

where she ties up her scarlet runner beans
and pulls a bag of peas for Miss Simpson.
Leave Wm in the wood to alter his poems;
praise Dorothy in the garden at Grasmere.

by Maxine Kumin
From: Still To Mow, 2007
Posted by Nan