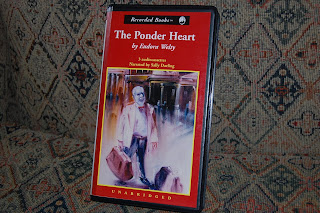 Sometimes I think I just don't "get" certain books. I wanted to adore The Ponder Heart because the author is Eudora Welty, to my mind one of the best writers ever. The narration by Sally Darling was sublime, in the sweetest of southern accents. It should have been a wonderful book, but I felt like I was on the outside looking in on people I didn't understand. The characters seemed like caricatures rather than real people; their actions so "out there" that I couldn't believe in them. Though the writing was very, very good, I thought the story and its people just plain silly. After I finished listening, I read the back of the case and saw references to Caldwell, Twain, and Dickens. Well, then, of course it didn't appeal to me. I'm not fond of any of those writers. Two words used to describe it were "high farce" and "raucous," features I don't like at all.

I did became quite fond of the narrator, Edna Earle, whose uncle Daniel Ponder's story she tells, and I liked the descriptions of the southern heat before the days of air conditioning. But those are pretty thin aspects to praise, and on the whole I didn't care for the book. It was quite short, only four hours of listening, and had it been longer, I probably would have quit.
Posted by Nan