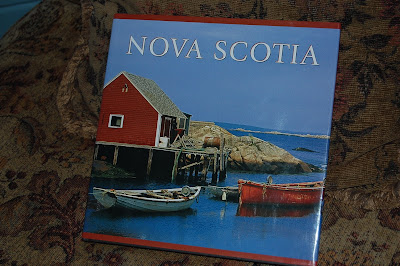 
Long before there were blogs, there were lists or groups online which connected people of similar interests. Several years ago I met a woman from Nova Scotia on one of these lists, and we formed a friendship. This is the same woman who recommended the Pierre Berton book I read for the first Canadian Book Challenge. Five years ago she sent me this book, and today I read it for the 2nd Canadian Book Challenge. It is a travel book, a tourist sort of book with information that this fact-geek absolutely loved: Halifax is the world's second-largest natural ice-free harbour; in 1917 a Belgian ship collided with a French vessel which carried explosives, and over 1900 people were killed - the largest man-made detonation in history until nuclear weapons were invented; in the wetlands of Kejimkujik National Park, 95% of the entire species population of Blanding's turtles lives.

This is a gorgeously photographed book which makes the reader want to go visit or move to Nova Scotia. It was named "New Scotland" by Scottish settlers because it reminded them of their homeland. I loved the book, and thoroughly enjoyed my literary stay there. I hope someday to visit the province, and my friend who gave me the book.
Posted by Nan