Today's cd/Sleep Through The Static 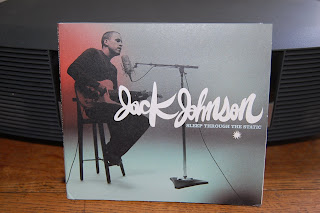 Jack Johnson
Sleep Through The Static
2008

I'm a word person. When a song is playing with words, I can't read, or even converse very well, because I'm listening to the words. That's why I prefer instrumental jazz if I'm reading or talking to people. But for every single rule, there is an exception, and Jack Johnson is mine. His words roll over me, as if he were just saying, the meditative "om." I've never known anyone like him musically. I wrote about him already, but today I'm featuring his new album. It is my favorite so far. I hear occasional words and I even read the liner notes, but mostly it is that voice, that music, that calm which he projects. I like to think that his music could really change the world. No road rage, no hatred of our fellow world citizens, just the peace that he gives off.
Posted by Nan