Book Report/Death on the Nile 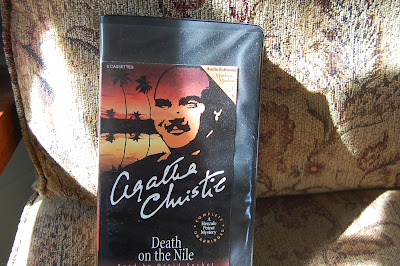 My love for Agatha Christie grows exponentially with each new book I read. And herein lies the best, best thing about book challenges. Without Joy's Anything Agatha Challenge, I'd still know the work of Christie only through the Miss Marple television programs, which starred the late Joan Hickson. Now, a whole new world has opened up, and I could spend a year reading just Agatha Christie books, and feel happy.

Death on the Nile is a Hercule Poirot mystery. Mr. Poirot takes a little trip down the famous river, and wouldn't you know it, there's a murder. Before the murder occurs, we meet several of his fellow passengers, not knowing just which one will end up dead. There are several solutions to the mystery which Hercule Poirot offers toward the end of the book. He shows us that any number of things may have happened, but didn't. This was a terrific device because in this manner he tied up several loose ends the reader wonders about.

Agatha Christie and Dorothy L. Sayers were masters at characterization, and the psychology behind their characters. The 'why' is important. Very modern for all those years ago.

This audio of Death on the Nile was very special because it was read by David Suchet, the man who portrays Hercule Poirot in the excellent television productions. His reading was amazing because he went so smoothly between Poirot's accent, the straight narration, and all the other characters.

Mary Dell in the Daily Mirror of November 11, 1937 said, "Agatha Christie is just grand. Usually if you get a good plot there is something wrong with the writing or the characters. But with her – you have everything that makes a first-class book."
Posted by Nan