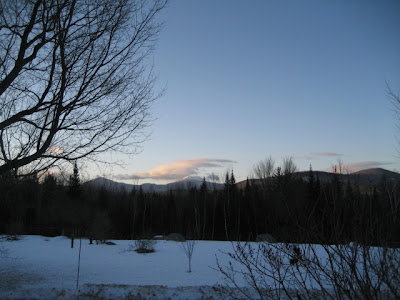 In his book, String Too Short To Be Saved, Donald Hall writes:

[Mount] Kearsarge tells the weather. For most of my grandmother's ninety-seven years she stood at the kitchen window early in the morning - beside her rocker, under her canary, in its many incarnations always named Christopher - braiding her long hair and looking out at Kearsarge. "Mountain's real pretty today," she would say to my grandfather bringing sticks for the stove, or "Can't see the mountain too good today." When clouds moved north or east to cover Kearsarge's slopes, you knew the cut hay would be wet in the summer morning; in early winter you saw the snow over Kearsarge before the first flakes fell into the brown hayfields and over the stalks of the kitchen garden.

He could have been describing "our" mountains, which we also see out the kitchen windows. Some days they are so clear it feels like putting on your glasses to someone with poor vision. Other days, they disappear completely, and it feels like we have only trees at the end of our view. There is indeed snow there before "the first flakes" fall here. This morning I could see the nice day coming before the sun reached our land.