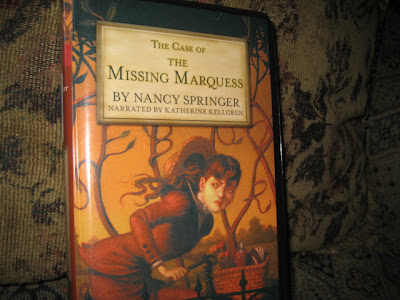 Early on in the book, Enola Holmes tells us that her name spelled backwards is "alone." And she is. Her father died ten years ago, her mother has disappeared on the eve of her fourteenth birthday, and she hasn't seen her much older brothers, the famous Mycroft and Sherlock Holmes since the death of their father.

The brothers come back home to try and find their mother, with no success. What they do find are some surprises. There are no longer horses and carriages. The lawns are overgrown with wild roses; lawns that were supposed to be taken care of by a gardener paid for by Mycroft. In 1878 England, when the father of the house died, that property went to the oldest son, not the wife. All these years, Enola and her mother have been living on the "kindness" of Mycroft. But there's a twist. For ten years Mrs. Holmes squirreled away all this money that was supposed to be spent on the upkeep of the estate. In those days, there was no other way she could have had her "own" money. Enola tells us that even women writers had to give their pay to their husbands.

Mrs. Holmes has told Enola nearly every day of her life that she (Enola) will do very well on her own. This proves to be the truth. The young girl is able to figure out some things even her detective brother can't fathom. She realizes that the birthday presents left by her mother offer clues through ciphers, and through the Victorian use of flowers to express feelings. Enola must rely on her cleverness and resourcefulness when Mycroft wants to send her off to a boarding school. She even makes excellent use of the corset which she, as a young woman, must begin to wear!

The book takes some twists and turns, with a missing young Marquess and travels into the terrible East End of London with its poverty and criminals. This young heroine retains her pluck in the face of danger and loneliness. She is quite a wonderful character, and I look forward to her next adventure.
Posted by Nan