The Country Girl on dvd 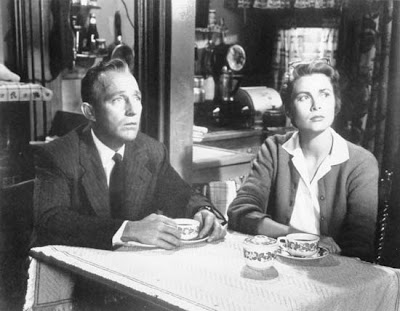 It seems as the years go by that people 'remember' the 1950s as sunshine and neighborhoods and happy people. The movies were cheery and in Technicolor. I am finding more and more that "it just ain't so." I've seen a number of movies made during that time, and I find them to be deep and compelling and really, quite serious examinations of life. Just this evening I watched The Country Girl, a 1954 film starring Grace Kelly, Bing Crosby, and William Holden, each of them giving a great performance. Grace Kelly won the Oscar for her role as the wife of an alcoholic. You'd hardly know her. She is plain, with a face worn down with burdens and sadness.

We find out quite early in the movie that the son of Bing Crosby and Grace Kelly died ten years before, and that the grieving, weakened man believes it was his fault. It really was an accident, but because he let go of the little boy's hand and the boy ran into the busy street and was killed, he blames himself. Over the years he turned to the bottle for solace. His career as a singer/actor is over and he is making radio commercials. They live in a shabby apartment, much like that in "The Honeymooners." William Holden offers Crosby a role in an upcoming play, and the story really begins. There is a complex psychological relationship between these three people. This is not upbeat or cheery or in color. It is serious and meaningful. A couple of quotes:

He hates himself. Consequently, he'll do or say anything to be liked by others.

There are as many reasons for drinking as there are drinkers. But there are only two reasons why a drinker stops. He dies... or he decides to quit by himself.

Just about anybody can face a crisis. It's that everyday living that's rough.

We find out Bing Crosby's "reason" for drinking is more complicated than we first imagined. The ending may not be to everyone's liking, but I felt it to be pretty realistic, especially for the people involved. This isn't an easy movie to watch, and it is hard to use the word, "enjoy" but I did like it. I thought the acting excellent, the story strong, and the characters worth knowing.
Posted by Nan