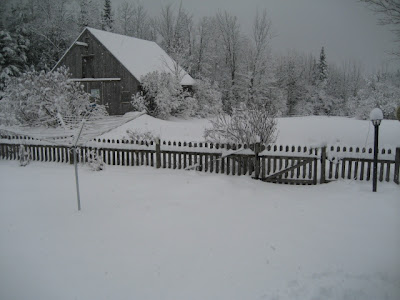 In a queer sort of way, we New Englanders are proud of winter. We have had many hard winters, some easy ones, some almost arctic ones. But I have never heard anyone complain about the weather. "Quite a storm," the postman may say, "but we have to expect it."
"Pretty cold last night," says the grocer. "Went down to ten below on my thermometer. This time of year we generally have some cold."
Even when it took our neighbor, Joe, four hours to shovel us out after one storm last winter, he only said, "Lot of snow fell this time."
Cars stall, motors freeze, wires go down sometimes. Roads drift deep with powdery snow. Branches crack and crash down. But neighbors get out to help one another and there is a good deal of joshing as to whose thermometer falls to the lowest mark. Winter, I think, is a common denominator, as well as a challenge to Yankee staying power.
Gladys Taber, Stillmeadow Sampler, 1959
Posted by Nan