"Blow up your tv" 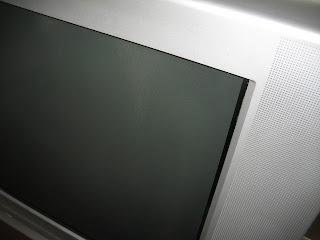 Blow up your TV throw away your paper
Go to the country, build you a home
John Prine

Well, we didn't really blow up our tv, but we did get rid of our satellite connection. We have Netflix so we can watch television shows, albeit a season late, with no commercials or no fast-forwarding through commercials.

After the wonderful birthday party last night, Tom and I started talking about the dish. Do we really need it? More importantly, do we really want it? And we decided no. It makes us feel rattled. Over the years we have caught up with many of the great television series from Netflix and we find we enjoy viewing that way better. Even our beloved LOST we enjoyed more when we had a marathon on dvds, rather than watching each week. We just do not need to be "au courant" in our television viewing. Maybe I'll buy the dvd of the Westminster dog show next year. :<) The only snag was Red Sox games, but Tom said he really doesn't need to watch every game for three hours a day. Heck, we can go to a friend's house or even out to a bar to see a game. And there is always the radio, the way my father and his generation all followed baseball. We can do this. We can live easier, calmer, and fuller lives without television. The house already feels quieter. Oh, and the bonus is we will be saving over $600 a year!
Posted by Nan