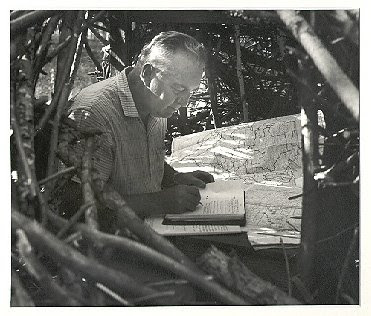 The author and his wife Nellie, after having taken many similar trips throughout the United States, decided to follow spring in Britain. They began at Land's End and worked their way to John O' Groats. In 1984, Beryl Bainbridge wrote a book called English Journey or The Road To Milton Keynes, in which she tells of going back over the route J.B. Priestly took in his book, English Journey published in 1934. I own both books, and I look forward to reading them one after the other to see the differences she found in fifty years time. As I read Springtime in Britain, I found myself thinking how much I would enjoy following the path the Teales took. I'll bet no one has done it. I keep telling Tom we should do this, and then write a book afterward!

I loved how Teale connected places or birds or flowers with some past writer or naturalist. I read many names I had never heard of, and some which I knew well. He was a truly learned man, with far ranging interests. The tale of their travels is told in a conversational manner, with moments of humor, wonder, and sadness.

Such reflections as these were interrupted by an outcry arising from one of the pasture fields of Tremedda Farm. Looking down, we saw a gander rushing, with flapping wings, toward a group of ten or a dozen cows feeding at the far side of the field. Its strident voice reached our ears more than half a mile away. As it neared the group, a small reddish cow turned tail and bolted, with the gander floundering in clamorous pursuit. For several minutes the chase and the uproar continued. Then quiet returned to the pasture. Every day, Griggs told me, this one gander seeks a time of excitement and diversion by chasing cows.

There is a wonderful, yet poignant description of his visit to a bookstore.

Late in the afternoon, on one of the side streets, I came in out of the cold, stepping down into the basement rooms of a crowded secondhand bookstore. Volumes, mainly dating from before the First World War, ranged in dusty ranks along the shelves or lay in piles on the floor. The proprietor, an elderly man, pale and drawn, huddled beside a small grate where coals were burning. He was bundled in a heavy blue coat such as seamen wear. A woolen blanket was wrapped about his legs and a large vacuum bottle of hot tea stood on a chair beside him. He spoke courteously in a weak, far-away voice, never leaving his seat by the fire. Three small boys, about eight years old, rushed about, helping with the mail and arranging the books.

I wandered down the shelves, gazing at these books of another time, now and then taking down some old, vaguely remembered volume. Here were books by Hall Caine, Marion Crawford, Gilbert Parker, Maurice Hewlett. Here were rows of volumes by H. G. Wells and Rudyard Kipling. Among the authors represented, how many of the great names of the past were almost disregarded now. From Foyle's, in London, to the smallest secondhand bookstall in a remote provincial town, of all the bookstores I encountered in Britain, this is the one that left the most enduring impression. I can see it all vividly now - the elderly man beside the tiny fire amid those thousands and thousands of books.

When he gets to Dorset, he makes a pilgrimage to Thomas Hardy's house, as Tom and I did in 1971. He expresses the awe which we readers feel when we visit the homeplace of an author.

These were the fields, these were the roads, this was the wasteland of the heath that had colored Hardy's mind and played so large a role in his Wessex novels. ... The basis of Hardy's indelible descriptions is the precision of his observant eye. When rain drips from the forest in his pages, it collects and falls according to the varied shapes of the foliage. Wherever we went in the Hardy country of Dorset, we were to observe the scene around us with the illusion of familiarity, a feeling that we had gone this way before. Our attitude was a tribute to Hardy's magic. We saw the scene as we had pictured it, or as he had pictured it for us. His descriptions are as faithful to the original as they are vivid. We see what he describes, and it is as he describes it.

He writes of hearing a cuckoo:

A new sound, a longed-for avian voice reached our ears. Mellow and repeated, it carried through the mist. In a lifetime first, we were hearing the "cooc-oo, cooc-oo, cooc-oo" of the bird so often mentioned in the prose and poetry of England. I happened to glance at my wrist watch. The hands pointed exactly to eight o'clock. For a moment I was uncertain. Were we hearing a real cuckoo or was it a cuckoo clock sounding the hour in some nearby cottage hidden in the mist? I counted the calls. They reached and passed the number eight. We were sure. The bird was real; the sound authentic. We were encountering, at last, the call that men had listened for for ages before Chaucer, the sound that each year, is looked forward to as the voice of the English spring.

Another bird he and Nellie long to hear is the nightingale. Poor Nellie is sick in bed at their inn, and he ventures out in the night rain, with a flashlight. The lengths to which he goes in his quest is amazing. I read these pages like a thriller or a mystery, eager to see if he would really hear the bird. As wonderful as his description was, Tom and I were happy to be able to go to the computer and hear what the sound is really like.

There's a delightful piece about an eighty year-old woman in a house overlooking Hickling Broad, which in past years was renowned for its annual coot shoot.

Her special pleasure was making friends with waterfowl. Each day she fed as many as 100 ducks on her lawn. A large picture window permitted her to watch their activity while lying in bed. When the time of the coot shoot arrived, each year, it was her habit to lay trails of grain leading into net-enclosed areas. There she penned up the waterfowl that visited her regularly, keeping them from harm until the "best guns" were gone and the slaughter of the day was over.

When Edwin and Nellie reach the area of Cheshire, we learn about the terrible sadness in their lives.

No longer the leisurely Cranford of Mrs. Gaskell's novel, the town of Knutsford swarmed with Saturday shoppers. All the country around, the farms, the roads, the villages held a special significance for us. For it was in this country-side, in the fall of 1944, that our son, David, had been stationed before going to the European front where, at the age of nineteen, less than two months before the end of the war, during night reconnaissance patrol ahead of the American Third Army, he was killed on the Moselle River, in Germany.

In one of the last letters written before crossing the Channel, David had mentioned some lovely English village he hoped to see again when the war was over. Military restrictions forbade mention of its name. On this day, in the sunshine of another season, we drove for a long time among the villages of the Cheshire plain in the vicinity of Knutsford. In each we gazed about us. Were these the cottages, these the lines, these the trees that, under conditions immeasurably different, had seemed so peaceful, so attractive to him?

In North with the Spring, Teale says that he and Nellie managed their grief during those horrible days of war and loss by keeping another dream alive. They planned a series of books based on travels following the progression of the seasons throughout America. The first of the books, North with the Spring, was published in 1951. In it he tells about leaving his home in New York on February 14 to drive their black Buick to the Everglades in Florida. There he turned around and followed the spring on a 17,000 mile journey up the eastern states. Over the next twenty years, he followed all the seasons, traveling to almost every state. He wrote books describing all the American seasons: Autumn Across America (1956), Journey Into Summer (1960), and Wandering Through Winter (1965). The books provide a fascinating chronicle of America, not just the changing natural seasons, but also a record of little known people and places during a pivotal decade and a half in a rapidly changing America. The books are full of anecdotes about other naturalists and quotations from other nature writers. All four books are dedicated to the Teales' son, David, who died in the war. The inscription reads, "Dedicated to David Who Traveled with Us in Our Hearts."

I can tell from reading Springtime in Britain that these were wonderful people. They were a devoted couple sharing each delight of their trip. I want to get all the American books, and read each in its appropriate season. I finished this on the last evening of spring and I had a glorious trip through Britain while simultaneously experiencing a sometimes similar, sometimes very different springtime at home.
Posted by Nan