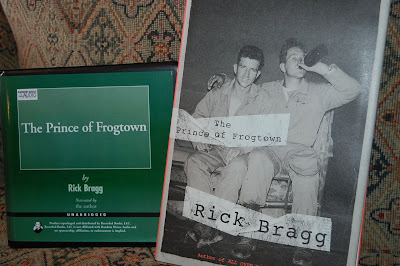 The Prince of Frogtown
by Rick Bragg
unabridged audio read by the author
biography, 2008
finished, 6/24/08

My reading journey via Maggie's Southern Reading Challenge ended just where it began, in Fairhope, Alabama. From Mary Lois' Meet Me At The Butterfly Tree, to Eudora's early life in Mississippi, to Rick Bragg riding with his son in Fairhope. I've had a wonderful trip, and hope to do it again.

I first read All Over But the Shoutin' in November 1999, and proclaimed to anyone who would listen that Rick Bragg was the best living American writer. Since then, he has written more books, married and gained a son he never, ever expected he would have. This latter event prompted him to find out more about his own father, who was nicknamed, the prince of Frogtown - the part of town where the millworkers in Jacksonville, Alabama lived.

Of the three Bragg books I've read, this was the saddest and most painful to read. For the most part, I listened to the audio, with occasional forays into the print version, and I'll tell you, there were parts I had to skip over; primary among them being a dog given to Rick's brother by his father. When the mother said, "You can't fight that dog," this reader knew that is exactly the fate which would befall the poor creature. I didn't need the details. My heart broke for Mr. Bragg when his brother told him that their dad had given Rick a tricycle, of which he had no memory. His brother Sam explains that it is because the father ran over it in the yard when he was drunk, and their mother put it away in a closet.

I think that if we look deep enough inside ourselves, we might admit that if we don't like someone, we don't want to hear anything good about them. Yet there are always people who have seen a different side; who experienced the generosity of a man his child knew only as critical; who saw the kindness in a young woman before she was hardened by life. In the other books, Charles Bragg was pretty one dimensional. Bad, period. Drunk, period. When his son, Rick becomes a new father, he simply has to come to terms once and for all with this father, and fill out his impressions. It is hard to father a child when one doesn't know one's own father. And he does hear some good things from people who knew him way back. These recollections may not overcome the horrible things but they at least round him out some. One fact in particular is striking. Charles Bragg saved his son's life once. Yet, he could have killed this child just as easily because he drove him around while he was drinking.

It was such bliss to hear Rick Bragg read his own book. I have listened to All Over But the Shoutin' and Ava's Man (twice) with two different narrators, both excellent, but not read by the man himself. So, even though I had bought the new book, when I saw it available at Recorded Books with Rick Bragg reading, I had to listen. He tells both his father's story, and his story as an evolving father. I thought this added great depth, poignancy, and warmth to the book.

I was happily reading along early in the book, when he suddenly says,

In faraway St. Johnsbury, Vermont, the eldest son of Elmore T. Ide, the handsome and charming George Peabody Ide, was expected to assume the presidency of his father's grist mill in 1887. But the dust from pulverized grain, drifting up from the grinding wheel, caused a severe allergic reaction in young Ide."

The upshot is that Ide and his uncle purchased, "the promise of unlimited natural resources to a place called Jackonville." I suppose most readers pass by the sentence with nary a notice, but I was born in St. Johnsbury, my mother went to nursing school there, my father died there. It isn't far away, and I visit often. I was stunned. And this led me to find out more about the Ides. I just knew the name as the local feedstore.

Ava's Man by Rick Bragg 2001 A+
I am waiting to read somewhere what I believe- that Rick Bragg is the best writer in America. His words, the way he puts the words together, those similes (!!), his subject matter. I am in awe. This book is about his grandfather, who died before he was born. What comes through is the deep love, understanding, and appreciation Rick Bragg has of this man and his times and his locale. I think it was Emerson who wrote that the sign of great writing is when it is personal to the author, but recognizable to the reader as something he has felt, and that he deeply understands. I read All Over But The Shoutin' in November 1999, and I wrote: "some of the very best writing I have ever read. Great storyteller. I had to stop listening to him at night because instead of lulling me to sleep, the book kept me awake with interest and delight. Perfect writing, riveting story. Deeply honest man, who doesn't even try to fool himself. A masterpiece of writing." Well, I could say all this about Ava's Man as well. It gives me goosebumps when I think back on Ava saying, "I had me a man". Thanks to Rick Bragg, we, too, are lucky enough to have met Charlie Bundrum. He isn't just a man of the South; he is a man of rural America, who is almost gone. My grandfather and my uncles were like him in the way he could do anything. They could build houses, and fix cars, and farm. They didn't have "hobbies". They worked every minute of their lives. I can see them in the portrait of Charlie. I see many of the men around here in him. This is a book that makes you almost ache with the love in it. In a time when people move so often, and so many places, Bragg's family mostly stays put. "This is home, and home is not something you remember. It is something you see everyday and every moment." I live where I grew up. My old neighbor lives in the house I was raised in, which is right next door to her mother. My past and present are all of a piece. Charlie had to move a lot when the kids were growing just to get work, but never farther than 100 miles. The family stayed where he is buried. "If he had died in the Arctic, I would be an Eskimo." Wonderful, excellent book.

All these years and a new book later, I feel exactly the same. He can tell a story better than anyone I know. He isn't afraid to show himself in the worst possible light. Most of us would keep the more negative aspects of our personalities hidden, but not Rick Bragg. Sometimes I winced but even then I applauded his honesty. And, as in the other books, I recognize the people. Northern poor, working class, drinking men are much the same as their Southern brothers. These tough men exist everywhere. I knew a father when my kids were little who didn't want his son watching Mr. Rogers' Neighborhood. We all know alcoholics even if we don't live with them. A man says of Rick Bragg's father, "The thing about Charles was, he just couldn't figure out how to be a drunk and a daddy, too." And in that one sentence lies the tale, a tale told so beautifully, so magically that I'll never forget it, yet will go back and read it again and again.
Posted by Nan