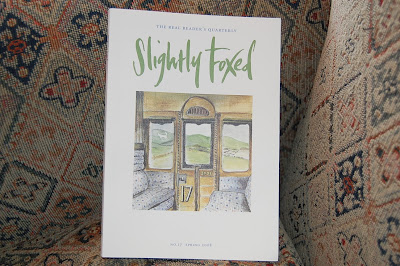 Over a year ago, Cornflower did a posting on Slightly Foxed. I was thrilled, and when Tom's mother gave me money for my birthday in February, I decided to get something I really wanted, and subscribed. My first issue was No. 17 Spring 2008. From now onward, the subscription will be a part of my annual budget. I love this collection of essays about books and authors. The subtitle is The Real Reader's Quarterly. This isn't a publication about the new best-sellers. Within its pages, you'll find articles on lesser-known books, writing, writers from the past, and authors, new and old you may never have heard of. They are now going into the business of publishing books that "have been allowed to slip out of print." The first one is Blue Remembered Hills, a memoir by Rosemary Sutcliff; the second My Grandmothers and I by Diana Holman-Hunt. I plan to buy them both.

We'll be applying the same criteria to Slightly Foxed Editions that we apply to the quarterly itself: good writing, serious not solemn, and with a high premium on humor.

I puzzled over the title until I finally found out that "foxed" means:

(of the paper of old books or prints) discolored with brown spots.

This Spring edition has an article on Agatha Christie, written by, joy of joys, a young woman; who as a teenager, actually tried to start an AC Club. She was the Chairman and there were two other members. It delights me beyond words when young people discover writers from the past. Some of my happiest library times have been roaming the stacks and coming upon an author, whose name I have vaguely heard but whose work I have never read. When I was in my early thirties, with little children in my life, I found Miss Read, and absolutely devoured every book I could find. Older writers can teach the reader so much about the times a book is written in. Even the small details and descriptions say, "hey wait a minute, this isn't now."

Reading Agatha Christie is a welcome relief from both political correctness and the convolutions of the modern world. She wrote books you can take into hospital with you - indeed, they were what my mother read when she was awaiting the birth of the Agatha Christie Chairman - or curl up with when you feel like being simultaneously scared and sentimental about an age you didn't even experience.

I so understand that. I long for times and places I have never lived in or seen, where I may go live for a while when I read books from the past. I think this publication will introduce me to some of these books.
Posted by Nan