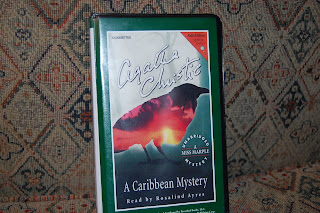 "Death is often a solution to problems."
Jane Marple

This mystery, my third in the Anything Agatha Challenge was much more enjoyable than At Bertram's Hotel. Miss Marple was the star instead of making only an occasional appearance. In this book, the reader is privy to her thoughts and conversations, exactly what I wanted from Bertram's. Recovering from pneumonia, Jane Marple has taken a vacation to the Caribbean, where, if we believe the advertisements even today, everyone wants to go for relaxation and romance . Not Jane. Early on she laments being away from St. Mary Mead because nothing happens in the Caribbean! She complains to herself about the unchanging weather and the boring landscape - "all those palm trees." A woman after my own heart. I've never wanted a tropical island vacation. Give me the landscapes of the British Isles, Ireland, or Prince Edward Island anytime. We meet a cast of characters; the innkeepers and the guests. There are just enough to make the story intriguing, but not so many that the reader cannot keep them straight. The tale begins with an old military fellow who bores everyone with his stories. While he is telling Miss Marple about a murderer in the past, his face suddenly becomes red and contorted. What has he seen over Jane's shoulder to have upset him so? Soon he is found dead, apparently from a medical complaint that 'everyone' knows about. And so we are off on a very fun, very interesting, and most agreeable mystery. I loved it.
Posted by Nan