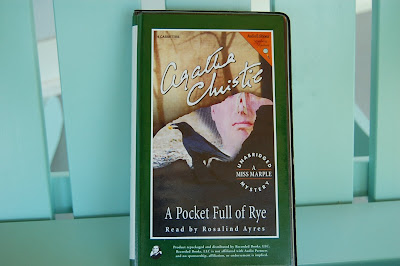 My fourth tale of Miss Marple, and as in At Bertram's Hotel, she is a part of the story, but not the main part. She doesn't make an appearance until chapter 13! After a third murder at Yew Tree Lodge, she travels from St. Mary Mead to offer her assistance because the last victim used to work for her. Though she isn't in the book that much, her presence in the house is very important to many of the characters, and as you may suppose, she is essential to the solving of the case. Her relationship with the police is an excellent, reciprocal one. I wonder if this is a trait of the Christie mysteries.

We have two poisonings, from two different poisons, and one strangulation. Seemingly unrelated, but really they must be connected, mustn't they? The reader is introduced to the Fortescue family who all have the most amazing names: Percival, Lancelot, Rex, and Miss Ramsbottom! When the patriarch, Rex, is found poisoned by taxine, from the yew tree, it is thought that perhaps his young wife did it, but then she turns up dead.

This most clever of mysteries uses the child's nursery rhyme as its basis. Rex means king, and he is in his 'counting house' when he dies.

countinghouse:
noun historical
an office or building in which the accounts and money of a person or company were kept.

His 'queen' was indeed at an English tea when she was poisoned by cyanide. And on it goes.

Sing a song of sixpence, a pocket full of rye,
Four and twenty blackbirds baked in a pie.
When the pie was opened, the birds began to sing,
Oh, wasn't that a dainty dish to set before the king?

The king was in his counting house, counting out his money,
The queen was in the parlour, eating bread and honey,
The maid was in the garden, hanging out the clothes,
When down came a blackbird and pecked off her nose.

When I was looking up the rhyme I found that it was a code to recruit pirates! Who knew?

I really enjoyed this fascinating mystery, thought I had it figured out, and of course was way off. Christie is so clear in her writing, so precise with her descriptions and characters, and has such a good knowledge of human nature. Excellent book.
Posted by Nan