From Springtime in Britain by Edwin Teale Way:

Because the wind from the west, sweeping in from the Atlantic, meets the mountains laden with moisture, the rainfall in the Lake District is the heaviest in England. ... Those who have read Dorothy Wordsworth's The Grasmere Journal will recall the frequency with which she and her brother, William, started for walks in the sunshine and returned home in the rain. But in the Lake District local showers are the rule; general rains the exception. ... The rains come and go. And the intervals between are often filled with beautiful weather, sunshine and drifting, fleecy clouds. As an old shepherd once responded when told that a fine day seemed in prospect: "Aye, it'll be fine between the showers."

Well, it appears that we are not in New Hampshire, but in the Lake District of England. Except for a few very sunny and hot days, we've had rain or showers or clouds interspersed with sunshine every day. I was going to go out strolling today, but honestly, it is pouring and the grass is soaking wet. Because of all this weather, we see green, green, green everywhere, soothing the eyes and spirit. There have been flowers, as you may have seen this week in my Indigo post. But they are the secondary rather than the primary June show. The green overpowers purple and pink and yellow. I'd expect to be a little sad about this, but honestly the green is just so great, so beautiful, so wonderful that I don't mind at all. 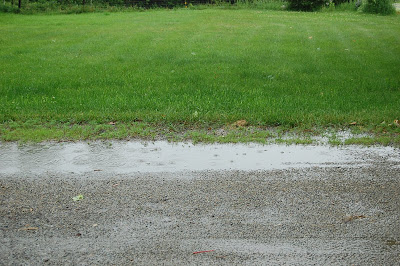