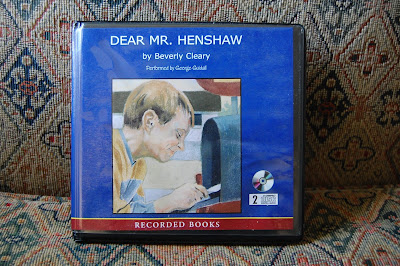 Fast forward 33 years from Henry Huggins, and you have Leigh Botts. His parents are divorced. His mother has an outside job working for a caterer, and goes to night classes to become a nursing assistant. His father is a trucker, rather irresponsible (hence, the divorce), and rarely around. Beverly Cleary reflects the way society and family life have changed in the years since Henry was growing up. Leigh doesn't have nearly the freedom that Henry had. Henry went all over town unsupervised, as we all did who grew up in those days. Leigh's mother doesn't like him "hanging around" various places. Henry had no tv, but was never bored. He was going off on some adventure all the time. Leigh's mom won't get the television fixed because it is "rotting his mind." Leigh has to come up with diversions to occupy his often lonely time. Henry had a neighborhood full of kids. The book begins with Leigh living in a mobile home park which he hates, and then after the divorce, he lives in a:

really little house, that used to be somebody's summer cottage a long time ago before somebody built a two-story duplex in front of it. Now it is what they call a garden cottage. It is sort of falling apart, but it is all we can afford. Mom says at least it keeps the rain off, and it can't be hauled away on a flatbed truck. I have a room of my own, but Mom sleeps on a couch in the living room. She fixed the place up real nice with things from the thrift shop down the street. Next door is a gas station that goes ping-ping, ping-ping every time a car drives in. They turn off the pinger at 10:00 P.M., but most of the time I am asleep by then. Mom doesn't want me to hang around the gas station. On our street, besides the thrift shop, there is a pet shop, a sewing machine shop, an electric shop, a couple of junk stores they call antique shops, plus a Taco King and a Softee Freeze.

Because this is a Beverly Cleary book, Leigh's life is not terribly troubled. There is no abuse or alcoholism. Yes, his folks are divorced, and yes, he doesn't see his father as much as he'd like, but both his parents love him. His mother tries to explain why his dad is as he is. Leigh's problems are still a young boy's problems; someone steals the goodies from his lunchbox, he has to make new friends when he moves. He doesn't have to go to a counselor or take medication.

The book begins with a class assignment in elementary school to write to an author. He chooses Boyd Henshaw, the man who wrote a book Leigh loves and reads many times about ways to amuse your dog. This little detail is telling. Henry's days were spent with Ribsy, and Leigh doesn't really even have a dog. Bandit rides in the truck with his dad, helping keep the man awake on long journeys. The years proceed quickly through other letters he writes to Mr. Henshaw. The author writes back with questions which Leigh answers as a way to spend his time. The author also suggests that Leigh keep a diary, which he does, still addressing the entries to Mr. Henshaw. We get to know him through his writing.

I love this book, which I have read a few times. I enjoy the epistolary style of getting to know a character. I like Leigh immensely, and feel I know him better than I do Henry. This may be because Henry's life is so carefree and secure that he doesn't have to grow up and gain an early maturity as Leigh does. This happens because of his family situation and also simply because of the societal changes in the 33 years. I know that I was much younger at certain ages than my own children were. My teacher read me Charlotte's Web in the sixth grade, and I read it to my kids before they were even in school. I didn't think I was too old for such a story. I was just younger longer. The book doesn't make the reader feel nostalgic for the past; Leigh lives his life in his own time. In 2016, it will be 33 years since this book was written, and I hope a writer of Beverly Cleary's caliber will tell another young boy's story so well, with such kindness and sensitivity and warmth.
Posted by Nan