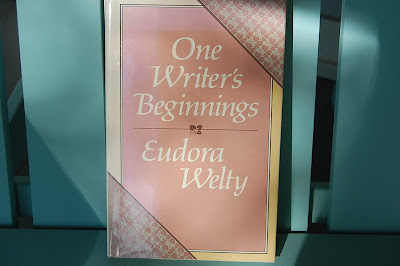 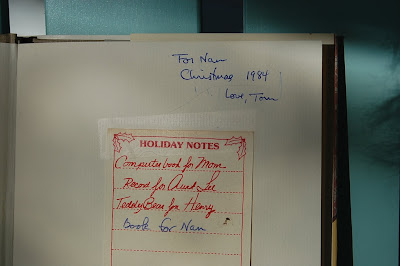 As you may see, Tom gave me this book for Christmas 24 years ago and it is time I read it! I thought I'd include a picture of the bookmark because I thought it was cute of Tom, and also because it really shows the time: a computer book - computers were still pretty new at that time; and a record - there were still records then! At least teddy bears are timeless.

The book is divided into three sections: Listening, Learning To See, and Finding A Voice. The writing is so quiet, so clear, so perfect that I felt in the presence of true greatness. I mean, I've enjoyed her fiction writing over the years, and used to love when she was on the Dick Cavett show, but to read this is different. Her words about her family, her childhood, her house, that sleeping porch will stay with me. So very many books are described as 'beautiful' but this one really is.

Eudora (I can't bring myself to call her 'Welty') calls herself calls a 'hidden observer,' and I knew just what she meant. I love to hear stories, and conversations without having to be part of them. I love the way she would say, when seated between her mother and another woman in the car on a Sunday ride, 'now talk.' That's the way I felt when my parents and their friends would settle down of an evening in the living room with cake and coffee, and I could stay up a while and listen. I tried to be very quiet, thinking they might forget I was there.

She lived in the thriving, growing Jackson, Mississippi, but visited in the summers, the mountains of West Virginia where her mother grew up, and the farm of her father's childhood in Ohio, so she really got to experience three different, really quite different, ways of living. They traveled by car and by train.

The swaying porter would be making ready our berths for the night, pulling the shade down just so, drawing the green fishnet hammock across the window so the clothes you took off could ride along beside you, turning down the tight-made bed, standing up the two snowy pillows as high as they were wide, switching on the eye of the reading lamp, starting the small electric fan - you suddenly saw its blades turn into gauze and heard its insect murmur; and drawing across it all the pair of thick green theaterlike curtains - billowing, smelling of cigar smoke - between which you would crawl or dive headfirst to button them together with yourself inside, to be seen no more that night.

Isn't that just wonderful? Don't you wish that you could sleep on such a train?

She writes of her parents:

When they decided to marry, they saw it as part of the adventure of starting a new life to go to a place far away and new to both of them, and that turned out to be Jackson, Mississippi.

After her father died:

As this was my second reading in the Southern Book Challenge, Y'all, it got me to thinking, what if Eudora Welty's mother had chosen differently? Would her writing have been different? Not Southern, certainly, but my guess is, it would have had the same gentle regard for people and for story. But who really knows?
Posted by Nan