Death of a dog 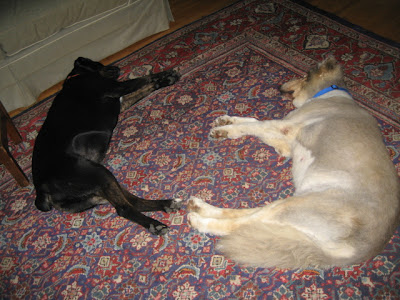 This is the last photo I have of our dear Collie, MacIntosh. I thought I had all the time in the world to take pictures of him, since he was only seven. As you may have read when I featured him, he had epilepsy. The poor boy had it for five of his seven years. Before he went on medication, it was terrible. Sometimes he would have several seizures in a day. Then he would go a long time and have them again. There was no rhyme or reason. Once he began taking medicine, he had far fewer. But still they would happen occasionally. The medication came with a possible toll and we accepted that. We felt it was better for him to have a shorter life than a life filled with horrific seizures. But the vet told us that he didn't think he died of a side-effect. He wasn't sure what the problem was, but it was possibly a brain tumor. We could have done tests, but they may not have been conclusive, and it just didn't seem fair to him to have to go through them. He hadn't eaten in several days, but at first that didn't send up any alarms, because he quite often didn't want food. Sometimes he just wanted "people food." Sometimes, the meal he ate one day, he wouldn't touch the next. This is just the way he was and had been for ages. He drank tremendous quantities of water, and we had decided to have him tested for diabetes. Yet, thirst is a side effect of one of the drugs, so even that didn't concern us terribly. But in this last week, all his problems just seemed to combine to overwhelm his poor body. The day our vet came to do his annual farm visit, he was going to give MacIntosh his shots, but a hour before the visit, he disappeared. Even that he had done once in a great while, but this time he didn't come home. The vet thought he had perhaps gone off to die, as animals are known to do sometimes. We had an uneasy night, and my gosh, the next morning he was home. At first, we were elated, but as the day wore on, we saw that he wasn't going to get better. Instead of crawling off to die, he came home to do so. His breathing was labored and we could see various signs of decline. Our dear vet came by after his long day, and very gently put our boy down. In just ten months time, we have gone from a household with four dogs to two. Our Annie died last October.

MacIntosh was the gentlest, most loving dog who gracefully put up with his medical problems, as all dogs do. They accept. Every dog's death is a great, great sadness, but it is especially hard when a dog is still young. We just thought he would have more years.