"Summer's lease hath all too short a date" William Shakespeare

My dance card is filling quickly.

Well, this sentence has stayed with me all through June, July, and into August. I just love it. We have had a summer with a full dance card. We haven't traveled away from home, but we've done several very fun things. Our first outing was on July 1 when we saw Pink Martini at Dartmouth College. What a wonderful, wonderful show it was. I have posted about them a couple of times on the blog, and when I saw they were going to be there, I got tickets immediately. The theatre was packed and the acoustics were tremendous. Individually, and as a group, they are a really, really talented bunch of people. They sing in like a million different languages, but we in the audience seemed to know exactly what was being described. If you haven't heard them, just buy a song or two from iTunes and see what you think. I love them. 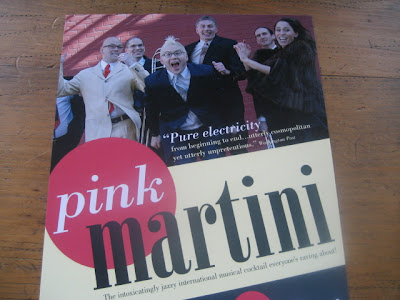 Then our cousins came for a week, and we went to the movies, and ate out, and went on a garden tour - complete with an English tea on real china. 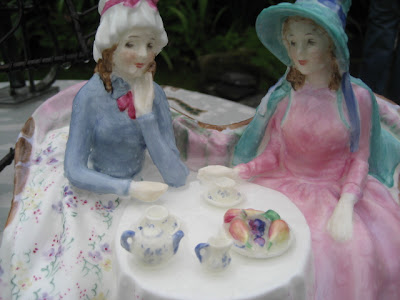 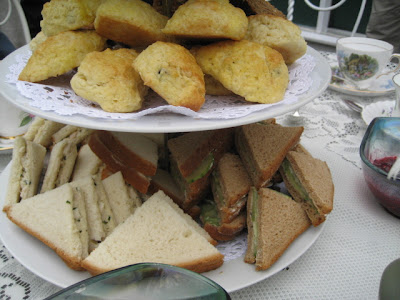 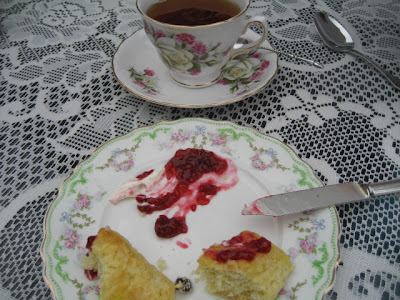 Another day out was on August 2. We went to the famous and much-loved Fenway Park to see the Boston Red Sox play. 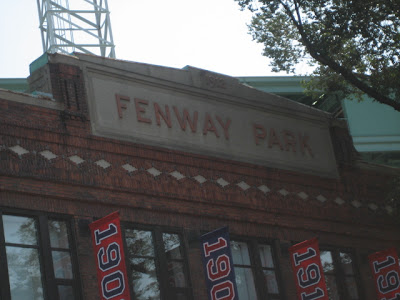 There was a very moving opening ceremony, as it was Bobby Doerr Day. I found tears coming to my eyes as this still dapper 89 year old man came on the field in a great old car. I've heard his name all my life and it was thrilling to be there on his day. As the article on wikipedia says, "this was most likely his last trip to Fenway." 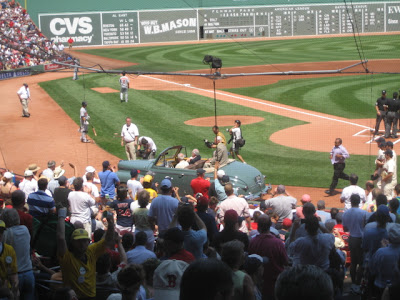 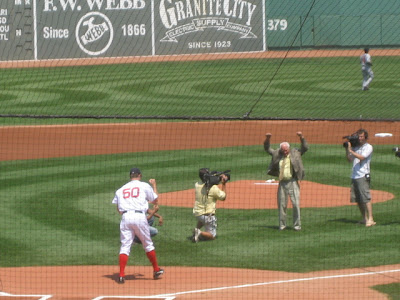 A great joy was that we went with both our kids. 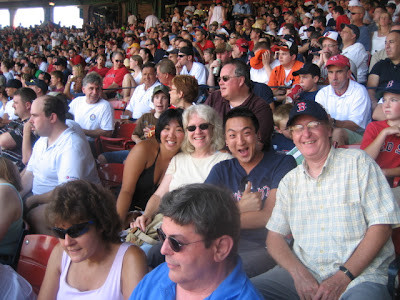 It was a wonderful day, but also, I was the hottest I've been in my life, I think. I kind of held myself together, but whew, it was hot. Luckily we were in the shade, but still. Then after a three hour game, we were in bumper-to-bumper traffic for two hours and because we were going slowly (and maybe because the Beetle is almost eight years old) the air conditioning didn't really work so we just had the windows open. Here is what the car thermometer read. 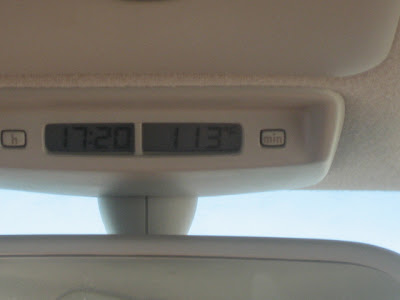 The third outing was last night. We saw Weird Al Yankovic in concert. If you have a child, or have a grown up child who is now in his twenties, you will know who Weird Al is. That's how we discovered him. "Amish Paradise" came out when our boy was eleven. This was the Straight Outta Lynwood tour. 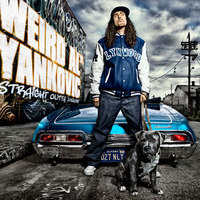 Again, the whole family went to see him, and what a show he put on. It didn't matter if you knew the song he was parodying. His talent is extraordinary, and he has a great band. Go to his myspace, and see the videos and hear his songs, if you don't know who he is. His energy, his humor, his intelligence, and his warmth are amazing, and we sat only 6 rows from the stage! Sadly, my camera battery was dead. :<( He was on stage for over two hours with no break. As you know, he has a lot of different outfits, so when he was changing into them between songs, there were video interview shows with Weird Al asking questions, and the "interviewees" answering. Really, this was just other footage of the people spliced with his questions. I am quite sure I have never laughed so much for such a straight amount of time. What do they say? Laughing is like jogging on the inside. Well, then, it was a perfect health experience!

Summer's almost over and I'm crying but I don't know why
Sentimental old fool, weeping for this blue, blue sky
And the way the cat is sleeping and the way the garden grew
Wagging dogs who lick my face and the way I feel for you

Paddling in the kayaks, with my sister, through the quiet creek
Moon upon the water and the river breeze upon my cheek
And the way my Father shuffles with his courage and his cane
And the way September bluffs and feints till autumn falls again
Oh summer's almost over and I'm crying but I don't know why

Who could help but welcome autumn and the promise of the winter snow?
Still there's something sweet and wistful as I watch this lovely summer go
But the sun is sinking sooner and the weeds have won at last
With the berries on the bushes and the crickets in the grass
Oh summer's almost over and I'm crying but I don't know why


She lives a bit further south than I, so it just may be that her September is my air and sky right now. She says,

Who could help but welcome autumn and the promise of the winter snow?

And I do. I love autumn and winter. I truly am ready to slow down a bit. I'm ready for early suppers and long evenings at home; I really am. And yet, these words are saying what is in my heart,

It has been such a nice summer. More time with my kids, more time with friends, the beautiful gardens, quite perfect weather. I'll be okay. I'll be excited for the fall soon, but right now, today, I, too, am feeling a little wistful.
Posted by Nan