"A pause in the day's occupations" Henry Wadsworth Longfellow

One of my favorite writers is Dominique Browning. I mentioned her in the book report on Laurie Colwin's book.

She is the editor of House & Garden magazine, and is the author of two books about her own house and garden; Around The House And In The Garden, and Paths Of Desire. Each book had affected me deeply. She writes from her heart, and warms mine with her words. In Paths Of Desire, she has a chapter called Sitting Around.

I had been dragging lawn chairs all over my yard for years, since the day I had moved in and first taken a rest in the garden, trying out pools of sun or shade, contemplating the view of the house from one and then another angle through the trees, or across the tattered ribbon of a lawn.

What I loved about that far corner was the long view over the yard and to the house. It was a deeply satisfying perspective. The chair in that far corner gave me some distance on the house; sitting there in the twilight, contemplating my dreams for the garden that I would someday plant, gazing into the living room through the old French doors, I felt simultaneous and conflicting waves of proud possessiveness and disassociation. There is a fascination in looking into your own house as if you were a stranger, especially at the gloaming of the day, when the rooms are lit up, and everyone inside is going about their business as if they were on a stage, but not knowing that they are being watched, one son practicing the piano, which he is supposed to be doing, the other tossing a ball around in the living room, which he is decidedly not supposed to be doing.

We spend so much time inside our houses, looking out, and not enough time looking at our houses from the outside. They are altogether different creatures from that perspective. There were many corners, in the garden, from which to contemplate the big picture.

I first read Paths Of Desire three years ago this month. I was so taken with the idea of looking at the house from a distance that the following June we hauled our heavy iron bench, one of two we inherited from Tom's grandmother, out a ways from the house. I have found it a wonderful place to be. It is like a little vacation spot in my own yard. Occasionally we sit out there together having cocktails with the dogs, but most often I go there alone to sit and look and sit and read. It amazes me what an oasis from daily life it is; not forty yards from the front door. It is where I go to take that "pause in the day's occupations." 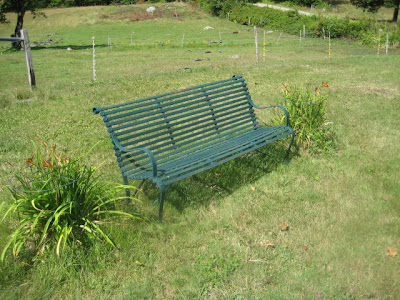 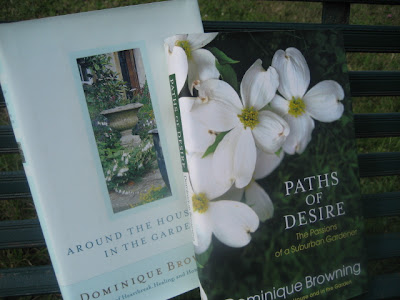 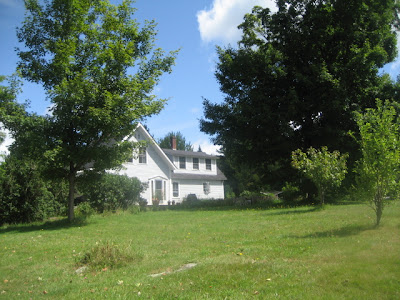