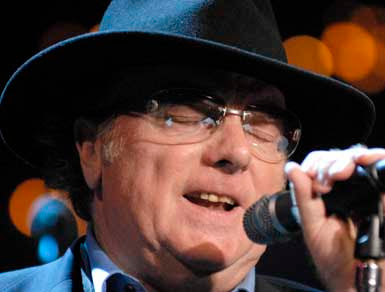 In our household, "not the God" has become the phrase of highest praise, and we use it sparingly.

The man about whom we say it most often is Van Morrison, who is 62 years old today. If I had to choose just one musician to listen to throughout eternity, it would be Van. I believe someday, long, long after I have departed this earth, he will be taught in colleges along with Yeats and all the other great poets who have ever lived. His work encompasses all human emotion from the depths of melancholy to the heights of ecstasy. He writes love songs and loss songs and spiritual songs and nostalgic songs.

From On Hyndford Street, Hymns To The Silence, 1991:

Take me back, take me way, way, way back
On Hyndford Street
Where you could feel the silence at half past eleven
On long summer nights
As the wireless played Radio Luxembourg
And the voices whispered across Beechie River
In the quietness as we sank into restful slumber in the silence
And carried on dreaming, in God
And walks up Cherry Valley from North Road Bridge, railway line
On sunny summer afternoons
Picking apples from the side of the tracks
That spilled over from the gardens of the houses on Cyprus Avenue
Watching the moth catcher working the floodlights in the evenings
And meeting down by the pylons
Playing round Mrs. Kelly's lamp
Going out to Holywood on the bus
And walking from the end of the lines to the seaside
Stopping at Fusco's for ice cream
In the days before rock 'n' roll

Little darlin', come with me
Won't you help me share my load
From the dark end of the street
To the bright side of the road 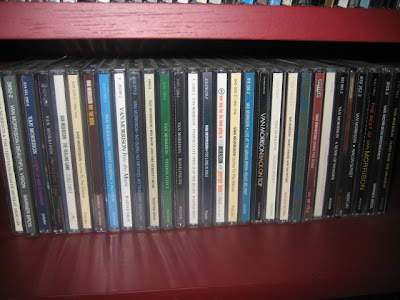 I am a fan, not a scholar, but I could happily ensconce myself in a wood-paneled study for the rest of my life and "study" Van's work. There is so much there, so much symbolism, so much passion, so much of both the material and the spiritual world, that one could listen forever and never know it all. Just like Shakespeare or Yeats or Keats or Donne. He's in good company. And he is worthy.

The song playing is Star of the County Down from an album done with The Chieftains.