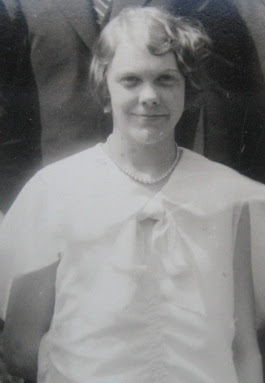 Today my mother would have been 94. An impossible age for me to imagine. She died at 59. I think of all the birthdays she has missed. I think of all that these 34 years have brought. Her daughter's marriage, two grandchildren now in their twenties, and in the wider world: Watergate, Nixon's resignation, the end of the Vietnam War, videos and dvds and cds and cell phones. Her last vote was cast for George McGovern. When she died, most of her brothers and sisters, as well as my dad's, were living. Now just one of her sisters is still alive.

I think that had she lived, she would still be full of curiosity, she would still delight in young people, she'd be hoping for a Democratic win, she'd be baking bread, and playing solitaire, and probably watching Grey's Anatomy and Lost with such pleasure. We'd be exchanging book titles. My kids would spend tons of time with her. She'd be telling them stories of me when I was little, and about Tom and I when we first met, and what an advocate she was for long-haired hippies, and how important family is. She'd be going to communion at her Episcopal Church. She would delight in women ministers.

This is her high school graduation picture when she was 16 (!!) years old. They started young in those days. By the time she was 20 she was a registered nurse. I wish she were around to tell me about the forties on the home front. And how she and my father met. Oh, I have a million unanswered questions and a sadness in my heart that never goes away.
Posted by Nan