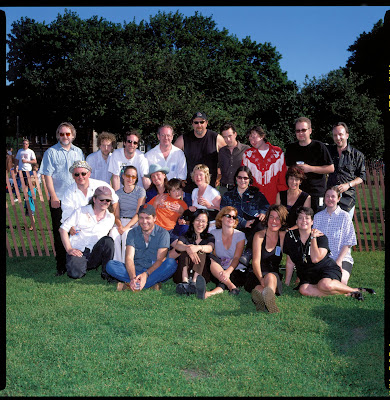 What I'm listening to this Tuesday afternoon isn't exactly a cd, but a compilation of Pine Valley Cosmonauts songs which Laura sent me a while back. This is great stuff. You might call it good-timey music, Americana, western swing, real country. They are out of Chicago, where a while back a radio station, WLS, used to broadcast a show calledThe National Barn Dance.

Back in 1924, before Nashville’s Grand Ole Opry went on the air, WLS in Chicago started broadcasting the National Barn Dance which became the most popular Country music & variety show in America thanks to the giant 50,000 watt lightning bolts of sound that a mighty radio tower shot out across rivers & plains and into the newly electrified parlors & sitting rooms of rural America. The show ran uninterrupted for 36 years, drew huge crowds to its Saturday night live broadcasts, as its stars became household names. On stage at the 8th Street Theater the country rubbed shoulders with the city, there were cowboys & angels, hymns, reels and polkas plus cornball humor so hilariously bad it took the roof off.

And some of this feeling comes through in their songs. They feature a terrific fiddler in his eighties who played on The Barn Dance. They sing songs with titles like Little Red Barn and I Want To Be A Cowboy's Sweetheart, and one of my favorite songs of all time, San Antonio Rose. Their albums are available at record stores, and on iTunes. Go take a listen and have yourself some fun. I love this band, and thank Laura immensely for introducing me to their music.
Posted by Nan