Book Report/The World According To Bertie 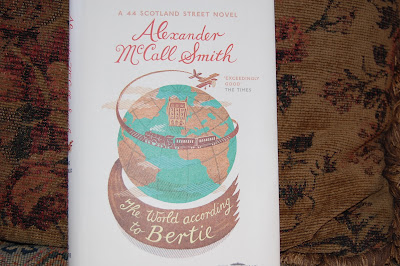 The World According To Bertie
by Alexander McCall Smith
fiction, 2007
finished, 3/21/08

Alexander McCall Smith is one of the most prolific writers writing today. He has several different series going, and new titles appear often. But still, he isn't fast enough for me! I'd be happy with a new book every couple months. I so love his books, particularly the Isabel Dalhousie series, the No. 1 Ladies' Detective Agency series, and the 44 Scotland Street series, of which The World According To Bertie is the fourth. When I read the first one, I wasn't thrilled. I didn't care for some of the people - Irene, Bruce - and didn't care too much what happened to them. This is what I wrote:

The author wrote this as a daily serial in a Scottish newspaper. He found that he cared about the characters so much that he is writing a sequel. At first I liked this book. Not an A+, but still very good. Then I found myself getting sick of some characters. They got bizarre and boring and their stories didn't really proceed. By the end, I was just slogging along to finish.

A few months later, again from my journal:

This book is one of the mysteries of reading. I read the first one, 44 Scotland Street, and thought it was okay but mostly wanted it to be done. For some strange reason, when I saw this offered at RB, I was excited to read it. And when I listened, I simply adored it. I just love AMS. He is probably my favorite living male fiction writer.

And from then on, I have been completely happy in the presence of these quirky, odd, warm characters. You probably know that the books were originally written in serial form in The Scotsman newspaper. I would have loved to read them that way, but this is second best, and maybe even better since I get my fill at one time. It is hard enough waiting for the next book.

As in all his books, along with watching the characters live their lives, we get a bit of philosophical thought, observations about the world and life, and some opinions. I can't help but think many (most?) of these are Smith's own, such as:

His daughter belonged to a generation that had been taught no geography, and very little history. And no Latin. Nor had they been made to learn poetry by heart, with the result that nobody now could recite any poems by Burns, or Wordsworth, or Longfellow.

And then, she thought, there were those books bought and not read. Somewhere there might be those who read each and every book they acquired - read them with attention and gravity and then put them carefully on a shelf, alongside other books that had received the same treatment. But for many books, being placed on the shelf was the full extent of their encounter with their owner.

we always regret impulsive purchases not made. [In this case he was talking about a book a woman didn't buy]

The familiar words of the Book of Common Prayer came back to him unbidden ... Such language, such resonant, echoing phrases ... And what had we done with it, with this language and all its dignity? Exchanged it for the banalities of the disc jockey, for the cheap coin of a debased English.

There's an awfully nice recent article on him here. And from that piece:

McCall Smith has some telling literary heroes: Auden, “who has such humanity and is so sensitive to meter. His literary executor wrote to me to tell me that he and Precious would have agreed on everything.” He likes Barbara Pym, too (“she celebrates small things and perhaps so do I”).

That doesn't surprise me at all. Auden and Pym are two of my favorites. There is a wonderful quote from Auden in the book:

If equal affection cannot be/Let the more loving one be me.

In the preface to this book, Alexander McCall Smith writes:

The book continues the story of Bertie - who has, quite astonishingly, remained six for the past four volumes, even while the other characters have aged and progressed.

And that's it. No explanation. No reasons. It just is. I love it. Fictional characters do take on a life of their own, irrespective of their author or their readers. No wonder they can seem so real to us. And how I love Alexander McCall Smith's creations.
Posted by Nan