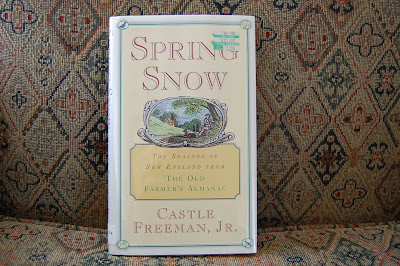 I love essays, and nature essays best of all. Spring Snow is such a book. Its subtitle is The Seasons of New England From The Old Farmer's Almanac. Castle Freeman, Jr. has written for this publication since 1981, and the book is a gleaning of those writings over fourteen years. If you don't have the annual magazine, you may still hear Freeman's monthly podcasts. Most of the essays are a page long, with the month and year at the end. I love that, too. He's a little more south of me, and over in the next state, but his writing is the very story of our lives here on this hill. I am going to buy a copy of this book for us, and for each of our children.

This book was suggested to me by my internet friend, Alison, who hopes to have her own blog next month. From the title, I thought it was to be a book of spring, but it covers all four seasons. Castle Freeman, Jr. may just be the very best of all the writers about the natural world whom I have read over the years. He writes in the preface that Thoreau didn't venture far from his home more than a few times in his life, and that this book is "in the same tradition." These are essays on "small, familiar matters and everyday occasions available to anybody - available to anybody, that is, who will hold still. I have read somewhere that most Americans move every five years. This book is not for them. Or, yes, it is: it's for them especially. It's for them more and more. Spring Snow is about staying put."

If a writing god were to offer me the talent and gift of writing, and asked, now, what type of writing would you like to do?, I would say, the kind of writing Castle Freeman, Jr. does in these essays. They are each one page of perfection, in subject matter and in execution. He doesn't waste words. He is clear. He draws the reader right in to what he is thinking.

The chickadee is the caretaker bird. Like his human counterpart who comes to houses in late fall after summer residents have left and sets things right for winter, the chickadee appears all alone one gray afternoon before snow and sets to work.... He's a caretaker of the spirit. He's here to help see you through the long winter that's ahead. If you give him seed - and sometimes even if you don't - the chickadee will keep you company from the first November day when he shows up, right along through the deepest cold and snow, and on into another spring. (November 1983)

The day lily must be an old-fashioned flower, I think. There is scarcely an old house without its lily bed, and they grow on banks beside the back roads where houses once stood. Lilies must have been a favorite garden flower of the farm wives long ago who had little time for cultivating what they didn't expect to eat. The lily was their flower because it needs little care. Just leave lilies alone and they will prosper. (July 1983)

Toward the end of February, as the season begins to commence to turn, every dooryard, every meadow, every wood is full of clocks. The winter buds are fat on the trees, and the brooks are running under the ice.... The tops of south-facing hills keep the sunlight longer and longer now against the night, and dusk lingers nearly until six o'clock. Every meadow is a sundial, the shadows of the trees along its edge reaching farther as each afternoon brings a little more sun. If you cared to keep such minute watch in your own backyard, you could tell the day without the aid of a calendar by measuring the angle of a tree's shadow at a certain hour or seeing how the sunlight lies in the open doorway of a shed. (February 1997)

And to end this very long blog entry, I shall quote an entire essay from April 1985. Simply said, it is just right.

Every spring there is one last all-out snowstorm, but this time people don't meet the weather with any of the varieties of resignation they have perfected over a long winter of successive snows. This time a big snowfall is, well, funny. Spring blizzards are a lark. Why? Snow is snow: if you're sick of it in February, you ought by rights to be even sicker of it in April. Besides, spring blizzards - at least around here - are often among the biggest storms of the year in terms of inches dumped. Last year we had two feet in one April storm. Oughtn't their volume alone to make them particularly oppressive, never mind their timing?

No. This argument starts from a false premise, that snow is all alike. It isn't. Every snow is different, and the big spring snow is the most different of all. That heavy accumulation doesn't weigh on your soul; on the contrary, the magnitude of a spring blizzard is one of the aspects of it that make it a joke. These storms are like an outrageous dessert that winds up a seven-course dinner: General Grant life-size in blue ice cream at the G.A.R. banquet.

And anyway, you can enjoy anything if you know it isn't real. Spring blizzards are like painted scenes of storefronts on a stage set. You enter the illusion knowing you could punch your fist right through the brick walls, knowing that very soon someone will come and pack the sets away. These are white storms. The sky is bright in spite of the snow, and the sun that will be out tomorrow is a spring sun that means business: in a day all this snow will be gone. You needn't take it seriously, then. The birds don't. The summer birds have already arrived, and you can hear the robins singing through the middle of the storm.
Posted by Nan