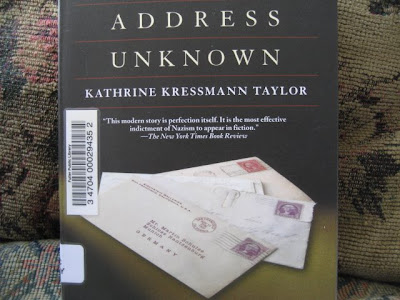 A short time before the war, some cultivated, intellectual, warmhearted German friends of mine returned to Germany after living in the United States. In a very short time they turned into sworn Nazis. They refused to listen to the slightest criticism of Hitler. During a return visit to California, they met an old, dear friend of theirs on the street who had been very close to them and who was a Jew. They did not speak to him. They turned their backs on him when he held his hands out to embrace them.

This was originally published as a short story, and it is very short, but its power demands it be a book unto itself. The publishers of this edition did a wonderful job with the cover and the endpiece, showing photographs of the "real" letters.

In 1932, one of the partners in a San Francisco art gallery has moved back to their native Germany. The story is told through letters, one of my favorite forms. We learn early on that Max, the man remaining in America is Jewish, and the other, Martin is not. The first letters are of course full of warmth and longing for one another's companionship. Max writes:

But there is another realm where we can always find something true, the fireside of a friend, where we shed our little conceits and find warmth and understanding, where small selfishnesses are impossible and where wine and books and talk give a different meaning to existence. There we have made something that no falseness can touch. We are at home.

The first letter from Germany to mention Hitler is dated March, 1933. Martin writes:

The man is like an electric shock, strong as only a great orator and a zealot can be. But I ask myself, is he quite sane?

Yet he goes on to say that he cannot express this doubt in public, only in this letter. By July, he writes of Hitler as "our Gentle Leader."

As often happens in short stories, there is a twist at the end, when the reader thinks, "oh, my gosh." This little book is a treasure, which was very important in its time and in all time.
Posted by Nan