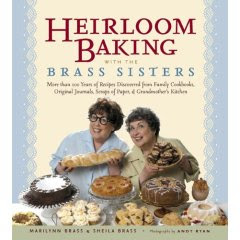 In January I did a blog entry on the next seven books I wanted to buy, and this cookbook was on the list. I now own it, and am oh, so happy I do. It is just my cup of tea. The book was put together by two sisters from Massachusetts who love baking. They have a website where you can read more about them, and even get a couple recipes.

The cookbook is set up and photographed so beautifully. The end-pieces show old, hand-written recipes and there is even an envelope for the reader to put her own recipes. This is a book I'll be using again and again, and probably will be posting recipes here. :<) Each recipe has a story, and is presented in a conversational manner as if Marilynn and Sheila Brass were in the kitchen alongside us. The instructions are clear and easy to follow. There are photos of old cookbooks, recipes, and kitchen gadgets. Really, a wonderful book.

Yesterday I made their shortbread, called Aunt Liz O'Neil's Shortbread. It begins:

Danese and Barbara Carey still talk about their great-aunt Liz O'Neill, who was married to their great-uncle Mike. A native of Glasgow and a superb shortbread maker, she emigrated to the United States as a young woman. The Carey sisters remember sitting at Aunt Liz's table taking notes while watching her bake. Although shortbread is traditionally made by hand, we have interpreted this recipe using a standing mixer.

1. Set the oven rack in the middle position. Preheat the oven to 350º F.
Line the bottom and sides of a 9-inch by 9-inch by 2-inch pan with foil. Grease the foil with butter or coat with vegetable spray.

2. Cream butter, sugar, and salt in the bowl of a standing mixer fitted with the paddle attachment. Add flour 1/2 cup at a time, beating just until flour is completely absorbed and dough comes together. Do not overbeat or shortbread will be tough.

3. Gently pat dough into pan. Do not press too hard or shortbread will be tough, not crumbly, after baking. Press down edges of dough with tines of fork. Prick top of dough evenly about 25 times.

4. Bake 35 minutes, or until shortbread is a light brown. Cover loosely with foil if surface browns too quickly. Cool on rack 20-25 minutes, or until slightly warm. Score shortbread with a knife into 1-inch by 2-inch pieces, but do not cut through entirely. When completely cool, cut into pieces along scored lines. The texture should be sandy and crumbly. 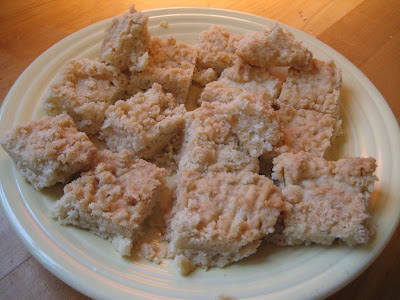 This was a delicious, light shortbread. Tom says it is the best he's ever had!
Posted by Nan