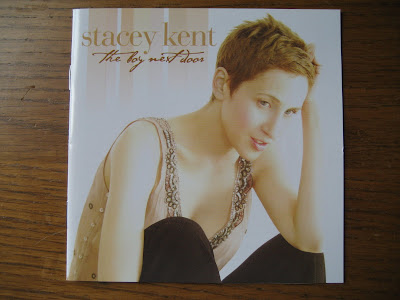 I love the way many of the current young singers combine the old standards with newer songs on their albums. Tony DeSare does Two For The Road, Jamie Cullum does Lover, You Should Have Come Over, Jane Monheit does Love Has No Pride.

On The Boy Next Door, Stacey Kent sings The Trolley Song and You've Got A Friend. She offers her rendition of You're The Top, followed by Bookends. And it works. The listener finds the transition between songs to be seamless. Good songs are good songs, no matter when they were written.

In the liner notes Stacey says,

The idea for this album struck me when an interviewer expressed surprise at the number of men on the list of my favorite singers and the broad range of styles they covered. He thought it natural to assume that female singers and moreover, female jazz singers, would dominate the list and found it peculiar that my own voice should have so little in common with the voices that have inspired me. In the same way that director, Martin Scorsese, who counts the fairytale-like films of Powell & Pressburger as an inspiration, and in whose films it might be hard to see any immediate similarity, I don't necessarily express my influences in an obviously imitative way. But when I sing, all of those beautiful and disparate sounds are with me.

This cd is a "collection of songs associated with some of Stacey's musical heroes" from Tony Bennett to Perry Como to Nat King Cole, along with many others. It is a superb album.
Posted by Nan