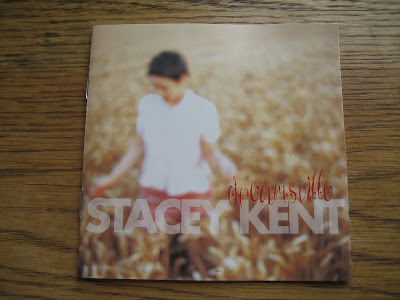 Somewhere among the many products of Susan Branch, I saw the lines,

They were attributed to a song title, Polkadots and Moonbeams. I had never heard it so went on a search, and found the song on a Chet Baker album and on Dreamsville. I bought them both, and this was my first introduction to the wonderful Stacey Kent.

This cd has the infectious, I've Got A Crush On You which I've been singing all day.

"could you care for a cunning cottage we could share"

Don't you love the word "cunning?" People used it all the time when I was little, but I rarely hear it now. This is one of the many joys of listening to old songs, hearing words from the past that delight the ear.

The song playing, Little Girl Blue is one of the few sad songs on the album. Mostly, this one is full of wildly romantic love songs filled with lines that set the listener dreaming.

A country dance was being held in a garden.

A summer night's magic enthralling me so.

In Dreamsville, time is new.

And there was April in that December.