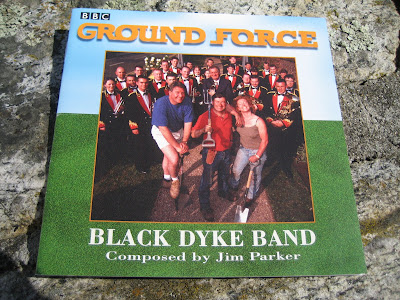 For a long time, I was a faithful viewer of Ground Force. We no longer get the channel, BBC America, so I don't know if it is even still on, but what a wonderful program it was. Though my house and garden aren't like the ones featured in the show, I got many, many ideas. I love Alan Titchmarsh, and all the others on the show.

This band was featured on one of the programs. As I mentioned once, my husband loves brass band music, as do I. One of the (very) many things I love about Britain is the town brass bands. The songs are delightfully titled with many of them in tribute to the hardworking cast; Tommy Tiger, Charlie's Water Music, Whippoorwill, and The Titchmarsh Warbler. This is a wonderful album for Saturday afternoon listening as I work around the house.
Posted by Nan