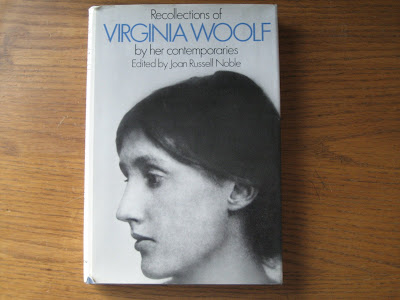 Remarkable, worthy of being remarked upon, is such an over-used word. Its meaning has been diminished. But when I began to write about this book, it was the first word that came to mind. It is thus for many reasons.

The first comes from what the editor writes in her introduction. She explains that this book is not a critical look at the work of Virginia Woolf, but is concerned with the person, and here is the amazing part, the remarkable thought, "about whom little has been said in print." The book was published in 1972. So much has been written about Virginia Woolf in the 35 years since Recollections came out; her diaries have been published, her letters are available to us.

The second reason for the adjective is the luck this reader feels just knowing these essays have survived. They were written down or broadcast on the radio and kept. One can pick up this book and read not only the eloquent words of T.S. Eliot, but also the honest regard of Leonard and Virginia's cook. These people knew her. That this book exists is a miracle. Joan Russell Noble has given us such a gift by collecting these writings.

A third reason this book is remarkable is that so many different people, really incredibly different people, quite often give the same impressions. From relatives, to close friends, to acquaintances, the reader hears the same descriptions. Which leads me to the fourth reason this book is so remarkable. The picture we get of Virginia, drawn by these disparate sources, is invariably not what we expect. When one hears the name Virginia Woolf, one doesn't immediately think funny, or curious, or mischievously questioning. She is also spoken of by everyone as very, very beautiful. Her face, the way she moved, even the way her clothes hung on her, she who cared nothing for fashion. She made her own bread, and taught the cook to do so. Can you imagine it? Virginia in the kitchen kneading bread. It makes me ache with affection for her.
Posted by Nan