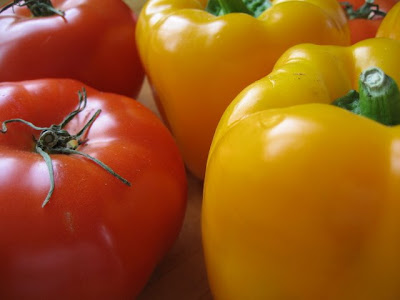 I headed over to the co-op food store today, and came home with these wonderful colors. The tomatoes are from a regional greenhouse, but those peppers are from who-knows-where. Both are organic. I do love the notion of eating locally but if one lives where I do, there wouldn't be much food unless you had a big, big garden and a way of storing potatoes, etc. I'm doing my best, as I have for almost forty years, but it will never be perfect. The faraway foods I bought today are scallions, leeks, lettuce, olive oil, basil, bananas, garlic, and the peppers. The foods from much closer are those tomatoes, cheese, butter, apples, some bread for supper, and potatoes. Everything was organically grown. I was thrilled I could buy that much. The hundred-mile limit was probably broken but at least they are from the next state, and in the case of the potatoes, Quebec. Tonight we are having my variation of Gladys Taber's Leek Soup:

After the potatoes are soft, I put the soup through a food mill, and heat it again at a low temp.

Addendum May 4, 2009: Over this past winter, I've cut the amount of leeks down to maybe 1 1/2 cups. 3 cups seemed like too much. I even wonder if way back I used 3 leeks rather than 3 cups of leeks. Anyhow, we both like it better with less leeks. It still has great flavor but is not overpowering.

Addendum Two - March 31, 2010: I used just 1 T. butter instead of butter and olive oil. I also reduced the water to 4 cups to make a thicker soup.
The bread was toasted, and served with roasted garlic and roasted tomatoes.
Posted by Nan