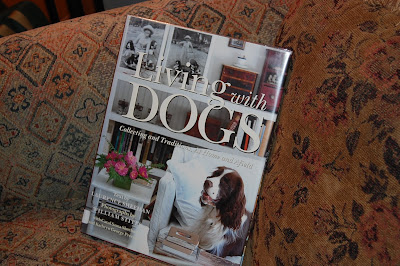 Living with Dogs might be described as a 'coffee table book.' Well, yes, maybe. It is large, and it does feature many dog pictures, but it is really more than this. I found it enchanting, and filled with the love that people have for their canine friends. We see some 'doggy' collections such as figurines, paintings, mugs, etc. There is a dog camp where owners and their pups can go. There's a chapter on The Leash, a club in NYC for 'sportsmen and dog fanciers.' This may sound trivial but it was started in the 1920s by people who served as watchdogs - pardon the pun - over the American Kennel Club. Their goals were met, and then it became more of a place for dog lovers to get together. There is a whole chapter on herding dogs, and another on the late Brooke Astor, a great dog lover, who said: I don't like people who don't like dogs - I just don't. This is a woman who married a man when she was sixteen years old because he promised her all the dogs she wanted!

I loved this book, though I wouldn't recommend buying it until you borrow it from the library and see if it is a book you want in your collection. I probably won't buy it, but I sure did enjoy reading it and looking at all the great photographs of people who are just as wild about dogs as I am. A reader named April recommended this book to me when I wrote my annual Westminster Dog Show post back in February, and I thank you so very much.
Posted by Nan