On The Waterfront on dvd 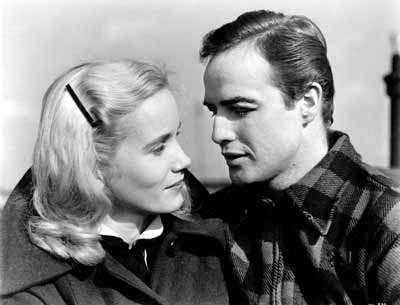 Waterfront has a very different connotation now from what it had when On The Waterfront came out in 1954. Now we think of restaurants and boutiques and gentrification. All is beautiful along the river. But not that long ago, towns looked away from their rivers. A friend of mine remembers a business that was built on the river front in our hometown having a toilet which emptied right into the river. Now that same 'waterfront' has a walking path, a farmer's market, more stores all the time. We have found the beauty of being by a river. It isn't just a utilitarian vessel for ships bringing goods or for carrying logs downstream.

Everything about On The Waterfront is perfect. The black and white photography, the story, the gritty feel to the place, which is Hoboken, New Jersey. If you visit Night Stranger's blog, you'll find that things are indeed very different in this city. In fact, her blog entry is what reminded me that I hadn't seen this movie in far too long, so I put it right in the Netflix queue.

Eva Marie Saint, who won the Oscar for best supporting actress, is wonderful. This was her first movie, and what a way to begin one's career. Her character, Edie, is the light on the waterfront, both figuratively and physically. Everyone and everything else is dark and dreary or scary.

The story is of the tough life of longshoremen whose daily existence is dependent on the mob bosses. They decide who will work and how much they will be paid. Cross them, and they'll kill you. The film actually begins with such a killing. Marlon Brando's character, Terry Malloy, lures a young man up to the roof by telling him he found one of his pigeons. The guy is then thrown off the roof. Malloy didn't realize that killing was part of the deal. He thought the bad guys would just rough him up a bit. The dead man is Edie's brother, and so the story proceeds. Will she find out that Brando is partly responsible for his death, and definitely knows who killed him? She has decided not to go back to the school where she has been studying to become a teacher. She tells her poor dad that she must find out who the murderer is. So this dad who has worked and saved to keep her away from the world of the waterfront must watch her get closer to Terry Malloy.

You've probably all seen the movie, or at least the 'contender' scene in the taxicab. But if not, I'm not going to write more and risk spoiling it. All I will say is watch it. And if you do, please check out the extras, especially the featurette and the interview with Elia Kazan. Both add a great deal to the film. Many think this is one of the very best films ever. See if you agree. I certainly do.
Posted by Nan