This is from the July entry of Mrs. Appleyard's Year by Louise Andrews Kent. She is writing about growing and eating peas in Vermont.


They must be sown as soon as the frost is out of the ground. Then they will be ready in July. Mrs. Appleyard thinks they are best if they are picked when the sun is shining on them and the pods hang like pieces of translucent jade in the warm green twilight of the vines. They should be cooked within three hours of the time they are picked. Half an hour is better. They should be brought to the table in a capacious dish, preferably a deep bowl of honest brown earthenware so hot that it cannot be passed around, but must stand steaming fragrantly until it is empty. ...

Opinions differ about cooking peas. Many ways are good. The purest taste (which is, of course, Mrs. Appleyard's) allows them to be cooked no longer than five minutes in little enough water so that it all vanishes. She likes no seasoning but a little salt and generous lumps of golden butter that disappear while they blend with the sweetness of the peas. Some people add a dash of sugar to them while they boil. Mrs. Appleyard considers this a confession of defeat before you start. The sugar would be in the peas themselves if they were picked young enough and recently enough. Peas that need sugar, she says, are nice for pigeons.

There are people who pour thin cream among them and eat them comfortably from a saucer with a spoon. Others add a sprig of mint, but this Mrs. Appleyard considers effete, a dangerous attack on Vermont independence. It was not to spoil the flavor of peas with mint that the Green Mountain Boys took Ticonderoga. Neither does she look kindly upon the practice of adding lettuce leaves and chopped chives. Peas that need such treatment should be made into soup, she says. She speaks sadly rather than sternly on these topics, and she admits that there are days - hungry days with a northwest wind blowing - when people of Vermont ancestry rightly yearn for peas cooked in the same dish with tiny new potatoes, enriched with small cubes of salt pork, and mellowed with thick yellow cream. She even cooks them that way for Mr. Appleyard.

No matter how they are cooked, if the subtlest perfection of flavor is to be enjoyed, they should be shelled by the family: shelled, not in any kitchen - no matter how sanitary, nor how gleaming with labor-saving equipment - but on a wide, shady porch where the sun flickers through elms and maples, where the wind blows the warm scent of drying hay and clover through the rustling leaves.

The air is full of pleasant sounds: the rush and gurgle of the brook; crows in argument among the pines; the rhythmic clatter of the mowing machine. A woodpecker is swinging back his scarlet-marked head and tapping out a message in Morse code on the Dutchess apple tree. The hummingbird's wings whirr as his ruby throat quivers among the larkspur. With the thunder of wheels and horses' feet another load of hay rumbles into the barn. Into this symphony comes the pleasantest sound of all: the stinging rattle of peas falling into a shining tin pan.

Peas, so shelled, Mrs. Appleyard believes, are more than food. Eating them, even three helpings at a meal, is not gluttony, but a rite.

They are summer itself.


Just this afternoon, Tom picked our first crop of peas! I shelled them outdoors, brought them in, and cooked them according to Mrs. Appleyard. It took thirty minutes from pod to cooked peas. Tom thought they were the best he'd ever had, for this reason: we had them all alone, as an afternoon treat, with no other food to take away from their exquisite flavor. 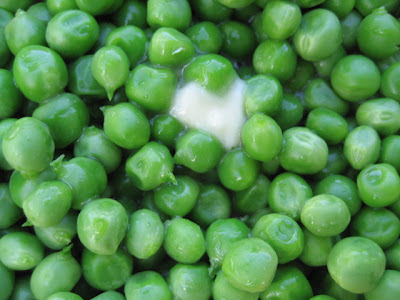