Another rainy evening at the movies 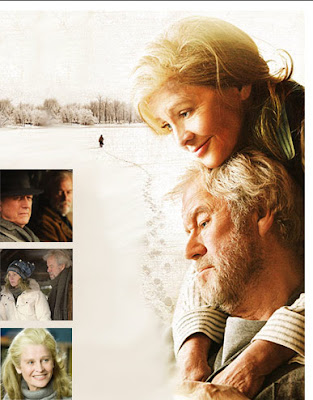 Tonight's movie was Away From Her, starring the still strikingly beautiful Julie Christie and an actor unfamiliar to me, Gordon Pinsent. As I wrote earlier, it is based on Alice Munro's story, The Bear Came Over the Mountain. For those of you with children in their twenties, you may recall a wonderful PBS program called Ramona, based on the terrific Beverly Cleary books. Well, Ramona was played by an actress named Sarah Polley. She went on to be in Road to Avonlea, and then other movies as she grew up. She wrote and directed this movie, and what a great job she did. The film was extraordinary. There have been a few movies-from-books I've seen that have been wonderful, and what made them so good is that instead of following the written source word for word, they captured the spirit of the book. A couple examples off the top of my head are Chocolat and The English Patient. What Sarah Polley did was to "flesh out" the story. She brought the characters of Fiona and Grant to life. She did make some changes but they all worked. And I actually found the movie to be sadder, warmer, and more touching than the story. The reason may well be that in two hours one has more time to expand what was said in 48 pages.

Visually, the movie was beautiful, with a lot of snow scenes, which I always love. The interior of the house helped us to know these people. The acting was just amazing. Julie Christie could show so much, just in her eyes. We could tell by looking in them if she was present or absent. I'm sure Gordon Pinsent is a Canadian national treasure, and I'm so pleased to have finally seen him. He was Grant. There was no sense that he was acting a part at all. And the role of the caretaker was played by a wonderful young actress named Kristen Thomson.

I can't praise the movie enough. The wonder is that it was made by a young woman of 28 years old! I would expect this from Nancy Meyers, who directed The Holiday and Something's Gotta Give; or Nora Ephron, who directed Hanging Up, You've Got Mail, and Sleepless in Seattle. But for a young woman to have such sensitivity toward an older, long-term relationship is pretty extraordinary.

The audience was mostly people my age or older, though I did see one young couple. That would have been Tom and I in our twenties. :<) I don't see as many young people at these kinds of movies as when I was young. Then we all flocked to Bergman, Antonioni, and Fellini films.

I loved this movie, and highly recommend it.
Posted by Nan