Book Report/My Summer In A Garden 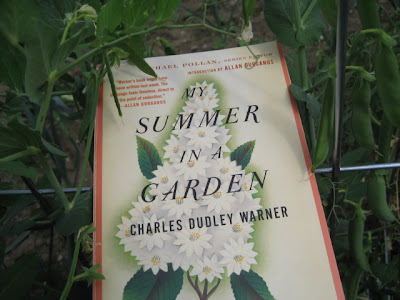 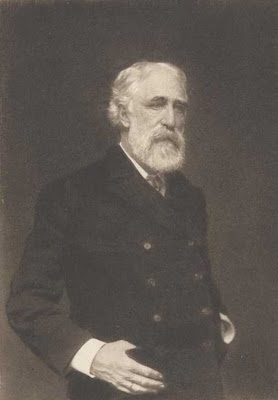 As I read more and more gardening books, I begin to wonder if a sharp wit, and often a great sense of humor are requirements for the writers of these books. Maybe it is simply that gardeners look at the world with a whimsical eye and do not take life too seriously.

I just finished My Summer In A Garden by Charles Dudley White, published in 1870. This was the June-July choice of the Garden Bloggers' Book Club.

Although I cringed at a few references to women and certain nationalities, I'm still glad they're there. I'm relieved the book was not made politically correct as some old books have been. It was written a long time ago, and that's the way he was. It's a real presentation of this particular man, at that particular time.

What is amazing is how much things remain the same. The scourge of his gardening life is "pusley" or what we know as purslane. It is also called Little Hogweed. The Giant Hogweed is right now a small problem in my state. We've been told to call the state officials if we see one and they will come take care of it. The scourge of my garden is goutweed. It is currently in just a small spot, but we have to keep right after it or it would take over. I hate, hate, hate it.

To own a bit of ground, to scratch it with a hoe, to plant seeds, and watch their renewal of life,–this is the commonest delight of the race, the most satisfactory thing a man can do.

Philosophy abounds throughout the book.

To dig in the mellow soil–to dig moderately, for all pleasure should be taken sparingly–is a great thing. ... There is life in the ground; it goes into the seeds; and it also, when stirred up, goes into the man who stirs it. The hot sun on his back as he bends to his shovel and hoe, or contemplatively rakes the warm and fragrant loam, is better than much medicine. ... Hoe while it is spring, and enjoy the best anticipations. It is not much matter if things do not turn out well.

Along with wit and a sense of humor, it does seem that most gardeners have a philosophical bent. How can we not? We plant something with high hopes, and it rains, or it doesn't rain. A bug or bird or animal eats it before we can enjoy the pleasure.

The principal value of a private garden is not understood. It is not to give the possessor vegetables and fruit (that can be better and cheaper done by the market-gardeners), but to teach him patience and philosophy, and the higher virtues, –hope deferred, and expectations blighted, leading directly to resignation, and sometimes to alienation.

And then the humor! I often laughed out loud as I read along.

Nature is prompt, decided, inexhaustible. She thrusts up her plants with a vigor and freedom that I admire; and, the more worthless the plant, the more rapid and splendid its growth. She is at it early and late, and all night, never tiring, nor showing the least sign of exhaustion.

It does not take a man long to soon discover, that, in raising any thing, the greater part of the plants goes into stalk and leaf, and the fruit is a most inconsiderable portion. I plant and hoe a hill of corn: it grows green and stout, and waves its broad leaves high in the air, and is months in perfecting itself, and then yields us not enough for a dinner. It grows because it delights to do so,–to take the juices out of my ground, to absorb my fertilizer, to wax luxuriant, and disport itself into the summer air, and with very little thought of making any return to me.

He uses a technique which I first saw in E. M. Delafield's Provincial Lady series. He'll be writing along, and then insert: "Observation" or "Moral Observations" or "Moral Truth" with an interesting, usually wry comment. These are seen not so often to be annoying or distracting to the reader, but just often enough to be delightful. I love them.

Observation.– [probably his most often quoted line] Nevertheless, what a man needs in gardening is a cast-iron back, with a hinge in it. The hoe is an ingenious instrument, calculated to call out a great deal of strength at a great disadvantage.

Later he comes upon a great hoe:

I do not mind saying that it has changed my view of the desirableness and value of human life. It has, in fact, made life a holiday to me. It is made on the principal that man is an upright, sensible, reasonable being, and not a groveling wretch. It does away with the necessity of the hinge in the back.

And hasn't this happened to all of us?

The other morning, I had just been running the mower over the lawn, and stood regarding its smoothness, when I noticed one, two, three puffs of fresh earth in it;

Here is an illustration from my own lawn, 137 years later. See the flat dirt on the left? That is the mole hill which appeared after mowing the other day. Today it was mowed over, and within minutes a new mole hill appeared. This is but one of the many, many things which makes this book as current, as fresh as the day it was written. 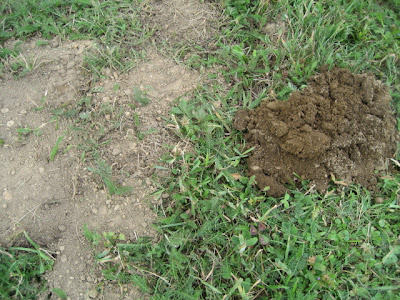 And this is just how I felt yesterday, eating those fresh, fresh peas!

I know of nothing that makes one feel more complacent, in these July days, than to have vegetables from his own garden. ... I have never known of any Roman supper that seemed to me equal to a dinner of my own vegetables.

I loved this book! It was simply wonderful, and the perfect summer book for gardeners. Bring it outdoors with you. Weed a bit, pick some tomatoes, sit down on your garden chair or bench and delight in the words of a gardener just like you. Feel refreshed by the knowledge that really and truly some things do not change.
Posted by Nan